Captain Charles Napier Sturt (28 April 1795 – 16 June 1869) was a British explorer of Australia, and part of the European exploration of Australia. He led several expeditions into the interior of the continent, starting from both Sydney and later from Adelaide. His expeditions traced several of the westward-flowing rivers, establishing that they all merged into the Murray River. He was searching to determine if there was an "inland sea".

Charles Sturt was born in Bengal,[1] British India, the eldest son (of thirteen children) of Thomas Lenox Napier Sturt, a judge under the British East India Company.[2] At the age of five, Charles was sent to relations in England to be educated,[2] and after attending a preparatory school he was sent to Harrow in 1810.[3]

In 1812, Charles went to read with a Mr. Preston near Cambridge,[3] but his father was not wealthy and had difficulty finding the money to send him to Cambridge University,[2] or to establish him in a profession.[3] An aunt made an appeal to the Prince Regent and, on 9 September 1813, Sturt was gazetted as an ensign with the 39th (Dorsetshire) Regiment of Foot in the British Army.[2]

Sturt saw action with the Duke of Wellington in the Peninsular War and against the Americans in Canada,[2] returning to Europe a few days after the Battle of Waterloo.[2] Sturt was gazetted lieutenant on 7 April 1823 and promoted captain on 15 December 1825. With a detachment from his regiment, Sturt escorted convicts aboard the Mariner to New South Wales, arriving in Sydney on 23 May 1827.[2]

Sturt found the conditions and climate in New South Wales much better than he expected and he developed a great interest in the country.[2] The Governor of New South Wales, Sir Ralph Darling, formed a high opinion of Sturt and appointed him major of brigade and military secretary.[3] Sturt became friendly with John Oxley, Allan Cunningham, Hamilton Hume and other explorers. Sturt was keen to explore the Australian interior, especially its rivers.[4]

Sturt received approval from Governor Darling on 4 November 1828 to explore the area of the Macquarie River in western New South Wales.[2] It was not, however, until 10 November that the party started out. It consisted of Sturt, his servant Joseph Harris, two soldiers and eight convicts; on 27 November Sturt was joined by Hamilton Hume as his first assistant. Hume's experience proved to be very useful. A week was spent at Wellington Valley breaking in oxen and horses and on 7 December the real start into comparatively little known country was made. 1828–29 was a period of drought and there was difficulty in getting sufficient water. The courses of the Macquarie, Bogan and Castlereagh rivers had been followed, and though its importance was scarcely sufficiently realized, the Darling River had been discovered. The party returned to Wellington Valley on 21 April 1829. The expedition proved that northern New South Wales was not an inland sea, but deepened the mystery of where the western-flowing rivers of New South Wales went.[3] 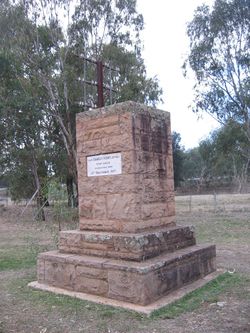 In 1829 Governor Darling approved an expedition to solve this mystery. Sturt proposed to travel down the Murrumbidgee River, whose upper reaches had been seen by the Hume and Hovell expedition. In place of Hume, who was unable to join the party, George Macleay went "as a companion rather than as an assistant". A whaleboat built in sections was carried with them which was assembled, and on 7 January 1830 the eventful voyage down the Murrumbidgee began.[3] In January 1830 Sturt's party reached the confluence of the Murrumbidgee and a much larger river, which Sturt named the Murray River. It was in fact the same river which Hume and Hovell had crossed further upstream and named the Hume. Several times the party was in danger from the Aborigines but Sturt always succeeded in appeasing them.[3]

Sturt then proceeded down the Murray, until he reached the river's confluence with the Darling. Sturt had now proved that all the western-flowing rivers eventually flowed into the Murray. In February 1830, the party reached a large lake which Sturt called Lake Alexandrina. A few days later, they reached the sea. There they made the disappointing discovery that the mouth of the Murray was a maze of lagoons and sandbars, impassable to shipping.[2]

The party then faced the ordeal of rowing back up the Murray and Murrumbidgee, against the current, in the heat of an Australian summer. Their supplies ran out and when they reached the site of Narrandera in April they were unable to go any further. Sturt sent two men overland in search of supplies and they returned in time to save the party from starvation, but Sturt went blind for some months and never fully recovered his health. By the time they arrived back in Sydney they had rowed and sailed nearly 2,900 kilometres of the river system.

A break from exploring

Sturt briefly served as Commander on Norfolk Island where mutiny was brewing among the convicts, but in 1832 he was obliged to go to England on sick leave and arrived there almost completely blind. In 1833 he published his Two Expeditions into the Interior of Southern Australia during the years 1828, 1829, 1830 and 1831, of which a second edition appeared in 1834. For the first time the public in England realized the importance of Sturt's work. Governor Darling's somewhat tardy but appreciative dispatch of 14 April 1831, and his request for Sturt's promotion, had had no result, and nothing came of the request by Sir Richard Bourke who had succeeded Darling that Viscount Goderich should give "this deserving officer your Lordship's protection and support". Though it seems to have been impossible to persuade the colonial office of the value of Sturt's work his book had one important effect. It was read by Edward Gibbon Wakefield, and led to the choice of South Australia for the new settlement then in contemplation. In May 1834, in view of his services, Sturt applied for a grant of land intending to settle on it in Australia, and in July instructions were given that he was to receive a grant of 5,000 acres (2,000 ha), Sturt on his part agreeing to give up his pension rights. On 20 September 1834 Sturt married Charlotte Christiana Greene, daughter of an old family friend.[2] and soon afterward sailed for Australia.

Sturt returned to Australia in mid-1835 to begin farming on his own 5,000 acres (20 km2) of land granted to him by the New South Wales government on the lower reaches of Ginninderra Creek, near present-day Canberra. (Sturt named the property 'Belconnen', a name now applied to the nearby population centre.) In 1838 he, with Giles Strangways, a Mr McLeod and Captain John Finnis,[5] herded cattle overland from Sydney to Adelaide, on the way proving that the Hume and the Murray were the same river. In September 1838 he led an expedition to the Murray Mouth which settled all dispute as to the suitability of Adelaide for the colony's capital. After returning to NSW to settle his affairs, Sturt then settled at Grange, South Australia in early 1839 and was appointed Surveyor-General and member of the South Australian Legislative Council[6] until the London-appointed Surveyor-General Edward Frome unexpectedly arrived. In the meantime, in December 1839, Sturt and his wife accompanied George Gawler, Julia Gawler, and Henry Inman on a Murray River expedition, discovering Mount Bryan. Julia Gawler, Charlotte Sturt, and Charlotte's maidservant thereby became the first white women to travel the Murray. Sturt was briefly Registrar-General but he soon proposed a major expedition into the interior of Australia as a way of restoring his reputation in the colony and London.

Sturt was driven by a conviction that it was his destiny to discover a great salt water lake, known as 'the inland sea', in the middle of Australia. At very least, he wanted to be the first explorer to plant his foot in 'the centre' of Australia.[7] In August 1844, he set out with a party of 15 men, 200 sheep, six drays and a boat to explore north-western New South Wales and to advance into central Australia. They travelled along the Murray River and Darling River before passing the future site of Broken Hill, but were then stranded for months by the extreme summer conditions near the present site of Milparinka. When the rains eventually came Sturt moved north and established a depot at Fort Grey in today's Sturt National Park. With a small group of men, including explorer John McDouall Stuart as his draughtsman, Sturt pressed on across Sturt's Stony Desert and into the Simpson Desert, at which point he was unable to go further and turned back to the depot.[8] Sturt made a second attempt to reach the centre of Australia, but he developed scurvy in the extreme conditions. His health broke down and he was forced to abandon the attempt. John Harris Browne, surgeon on the expedition, assisted Sturt, took over leadership of the party and after travelling 3,000 miles (4,800 km) brought it back to safety.

Early in 1847 Sturt went to England on leave. He arrived in October and was presented with the Royal Geographical Society's gold medal. He prepared his Narrative of an Expedition into Central Australia for publication, however it was not published until early in 1849. Throughout this time he was suffering again with poor eyesight.

Sturt returned to Adelaide with his family, arriving back in August 1849. He was immediately appointed Colonial Secretary with a seat in the council. There was no lack of work in the ensuing years. Roads were constructed, and navigation on the Murray was encouraged. But Sturt had renewed trouble with his eyes.

On 30 December 1851 Sturt resigned his position and was given a pension of £600 a year[2] and settled down on 500 acres (200 ha) of land close to Adelaide and the sea. But the gold discoveries had increased the cost of living, and on 19 March 1853 Sturt and his family sailed for England.[2] Sturt lived at Cheltenham and devoted himself to the education of his children.

In 1855 Sturt applied unsuccessfully for the positions of Governor of Victoria and in 1858 for Governor of Queensland.[2] Sturt's age, uncertain health, and comparatively small income were against him. By 1860 Sturt's three sons were all in the army, and the remainder of his family went to live at Dinan to economize after the expenses of education and fitting out. Unfortunately the town was unhealthy and in 1863 a return was made to Cheltenham. In 1864 Sturt suffered a great grief in the death of one of his sons in India. In March 1869 he attended the inaugural dinner of the Colonial Society, at which Lord Granville mentioned that it was the intention of the government to extend the Order of St Michael and St George to the colonies. Sturt allowed himself to be persuaded by his friends to apply for a knighthood (KCMG), but afterwards regretted he had done so when he heard there were innumerable applications.

Sturt's health had been very variable and on 16 June 1869 he died suddenly. He was survived by his widow, two sons, Colonel Napier George Sturt, R.E. and Major-General Charles Sheppey Sturt, and daughter Charlotte. Mrs Sturt was granted a civil list pension of £80 a year, and the queen granted her the title of Lady Sturt as if her husband's nomination to a knighthood of the order of St Michael and St George had been gazetted. Reproductions of portraits by Crossland and Koberwein will be found in Mrs N. G. Sturt's Life, which suggest the charm and refinement of Sturt's character.

Sturt is buried in Cheltenham Cemetery.[9]

Sturt is commemorated by:

Sturt's home, known as "The Grange", in the Adelaide suburb of Grange is preserved as a museum.

The Australian-born American actor Rod Taylor, whose middle name is Sturt, is his great-great grand-nephew.

The standard author abbreviation Sturt is used to indicate this individual as the author when citing a botanical name.[10]