Family and ascent to rule

Charles Theodore was of the Wittelsbach house Palatinate-Sulzbach.[1] His father was Johann Christian, who later became Count Palatine of Sulzbach. His mother was Marie-Anne-Henriette-Leopoldine de La Tour d'Auvergne, margravine of Bergen op Zoom, a grandniece of Henri de la Tour d'Auvergne, Vicomte de Turenne. Charles Theodore was born in Drogenbos near Brussels and educated in Mannheim.

Charles Theodore was margrave of Bergen op Zoom from 1728 onwards. He then succeeded his father as Count Palatine of Sulzbach in 1733 and inherited the Electoral Palatinate and the duchies of Jülich and Berg in 1742, with the death of Charles III Philip, Elector Palatine. To strengthen the union of all lines of the Wittelsbach dynasty Charles III Philip had organized a wedding on January 17, 1742 when his granddaughter Elizabeth Augusta was married to Charles Theodore and her sister Maria Anna to the Bavarian prince Clement.

As reigning Prince Elector Palatine, Charles Theodore won the hearts of his subjects by founding an academy of science, stocking up the museums' collections and supporting the arts. When Maximilian III Joseph of Bavaria died in 1777, Charles Theodore became also Elector and Duke of Bavaria and moved to Munich. 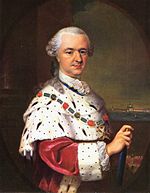 So, on 3 January 1778, shortly after the death of Max Joseph, Charles Theodore signed an agreement with Emperor Joseph II to exchange southern Bavaria for part of the Austrian Netherlands.

This plan was strongly opposed by Maria Anna Sophia of Saxony, the widow of Max Joseph, and Charles Theodore's cousin Charles II August, Duke of Zweibrücken, the head of the House of Palatinate-Birkenfeld and next heir of Bavaria and the Palatinate. They were supported by Frederick II of Prussia, and most of the German minor states.

The ensuing diplomatic crisis led to the War of the Bavarian Succession, which was ended by the Peace of Teschen (1779). Charles Theodore accepted the Bavarian succession, but agreed that his illegitimate descendants could not inherit Bavaria.[2] Austria acquired the Innviertel, a part of Bavaria in the basin of the Inn river.[3]

Charles Theodore had only one son with his wife, Countess Elizabeth Augusta of Sulzbach, who died a day after birth. His wife died in 1794. In 1795, he married Maria Leopoldine of Austria-Este, Joseph's niece, but they had no children. A second proposal to exchange Bavaria for the Austrian Netherlands in 1784 also failed as Frederick II of Prussia initiated the Fürstenbund.

When Charles Theodore died, Bavaria and the Electorate passed to his cousin, Max Joseph, Duke of Zweibrücken, the younger brother of Charles August, who had died in 1795.

In 1989, Marvin E. Thomas in Karl Theodor and the Bavarian Succession, 1777–1778 argued that in fact Charles Theodore wanted to maintain possession of his new territory, and that this is shown in his diplomatic correspondence. Thomas is the only scholar to produce such an analysis.[4] It is more widely understood that Charles Theodore continued the despotic and expensive habits he had developed as Elector Palatine.

Rule as Elector of Bavaria

Charles Theodore never became popular as a ruler in Bavaria according to his critic Lorenz von Westenrieder. He attempted without success to exchange the ducal lands of Bavaria for the Austrian Netherlands and a royal crown, and he never managed to control the mounting social tensions in Bavaria. After a dispute with Munich's city council Karl Theodor even moved the Electoral residence in 1788 to Mannheim but returned only one year later.[5]

In 1785, he appointed the American Loyalist exile Benjamin Thompson as his aide-de-camp and chamberlain. Over the next 11 years, Thompson reformed the army and many aspects of the state, rising to high ministerial rank with Charles Theodore's backing, and becoming Count von Rumford.

Charles Theodore is also known for disbanding Adam Weishaupt's order of the Illuminati in 1785.

In 1794, the armies of revolutionary France occupied the Duchy of Jülich, in 1795 they invaded the Palatinate, and in 1796 marched towards Bavaria. Charles Theodore begged Francis II for help which in essence would have made Bavaria a puppet state of Austria. When he died of a stroke in Munich in 1799, the population in Munich celebrated for several days. He is buried in the crypt of the Theatinerkirche in Munich.

Despite the mutual dislike and distrust between the Duke and his Bavarian subjects, Charles Theodore left a distinctive mark on the city of Munich: it was during his reign that the English Garden, Munich's largest park, was created, and the city's old fortifications were dismantled to make place for a modern, expanding city. One of Munich's major squares, Karlsplatz, is named after Charles Theodore. Munich natives, however, seldom use that name, calling the square instead Stachus, after the pub "Beim Stachus" that was located there until construction work for Karlsplatz began. One of the main reasons for this is that Charles Theodore, as noted above, never enjoyed the popularity in Bavaria that he enjoyed in the Palatinate.

Charles Theodore was more interested in arts and philosophy than in politics. The historian Thomas Carlyle referred to him as a "poor idle creature, of purely egoistical, ornamental, dilettante nature; sunk in theatricals, bastard children and the like; much praised by Voltaire, who sometimes used to visit him; and Collini, to whom he [Charles Theodore] is a kind master."[6]

Although by nature intelligent, he has never succeeded in ruling by himself; he has always been governed by his ministers or by his father-confessor or (for a time) by the [E]lectress [his wife]. This conduct has increased his natural weakness and apathy to such a degree that for a long time he has had no opinions save those inspired in him by his entourage. The void which this indolence has left in his soul is filled with the amusements of the hunt and of music and by secret liaisons, for which His Electoral Majesty has at all times had a particular penchant.[7]

In the course of his career, Charles Theodore acquired a celebrated secretary when the Florentine noble, Cosimo Alessandro Collini (1727–1806), who had been Voltaire's secretary, accepted his patronage, and remained in the Palatine.[8] Although Charles Theodore certainly wished to acquire more territory, he had only natural sons, thus he preferred territory that he could dispose of through his testament, rather than territory encumbered by a legal entailment that could only pass to a legitimate son.[9]

Charles Theodore was a great lover of the arts, including drama and especially music. His Mannheim court orchestra was considered one of the finest in its time. The Mannheim School (including composer Christian Cannabich and conductor Johann Stamitz) did groundbreaking work that the celebrated Wiener Klassik would later draw upon. Mozart applied for a position with the Mannheim orchestra in 1777, but was turned down, as the court was about to move to Munich. In 1780, Charles Theodore commissioned Idomeneo from the composer. Mozart quotes him as saying "No music has ever made such an impression on me. It is magnificent." [10]

In keeping with the customs of the time, an Italian opera company as well as a troupe of French actors were employed at Mannheim, each performing in their respective tongues. Later, the Nationaltheater (national theatre) was established, one of the first theatres in Germany to exclusively showcase plays in the native tongue (most notably, the first staging of Schiller's "Die Räuber" in 1782).

In the visual arts, a massive collection of plaster casts taken from celebrated antique works was assembled at Mannheim. The preexisting Düsseldorf gallery, including many works by Rubens, was first transferred to Mannheim, then to Munich, where it was later incorporated in the Alte Pinakothek. While none of the Mannheim painters are particularly notable today (with the possible exception of Kobell, primarily a master of landscapes), the elector had several highly talented sculptors at his disposal, among them Verschaffelt, Simon Peter Lamine and Konrad Linck. Linck also distinguished himself as a designer of porcelain figurines at Frankenthal.[11]

Charles Theodore’s chief architect Nicolas de Pigage was charged to complete the Mannheim Palace, design the Schlosstheater and the gardens at Schwetzingen Palace ( including numerous pavilions, among them several artificial “Roman” ruins and a “mosque”) as well as Benrath palace. While these works are in a pure contemporary French style (marked by the transition from late Baroque to early classicism), some of the other architects employed by Charles Theodore were proponents of a more Italianate style. This mixture of influences is, in fact, typical of many German courts of the period. Charles Theodore was also responsible for the construction of the Old Bridge in Heidelberg, which bears his name as the Karl-Theodor-Brücke.

Charles Theodore liked to style himself as a prince of peace, in contrast to other princes like his chief political opponent, the great warrior Frederick II of Prussia. Allegorically, Minerva, the Roman goddess of wisdom and protectress of the arts, is often depicted as a stand-in for the elector himself. This self-view is best summed up in the inscription of a small monument at Schwetzingen:

“A field of war and death of Romans and Germans has been discovered, through the unearthing of weapons, urns and bones, in the year 1765. - To the arts of peace, which are the sole joys of his life, the elector Charles Theodore has dedicated this spot, excavated to the height of seven feet, and had this monument erected in 1768.”

On 17 January 1742, in Mannheim, he married Elisabeth Auguste, daughter of Count Palatine Joseph Charles of Sulzbach and his consort Countess Palatine Elizabeth Augusta Sophie of Neuburg. There was one child of this marriage, Francis Louis Joseph (28 June 1762 – 29 June 1762).

On 15 February 1795, in Innsbruck, he married Archduchess Maria Leopoldine of Austria-Este. There were no children of this marriage.

From his liaison with the actress Françoise Després-Verneuil, later Countess von Parkstein (died 1765): 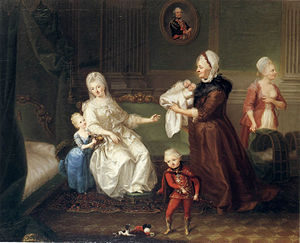