Charles Thomson (November 29, 1729 – August 16, 1824) was an Irish-born Patriot leader in Philadelphia during the American Revolution and the secretary of the Continental Congress (1774–1789) throughout its existence.

Thomson was born in Gorteade townland, Maghera parish, County Londonderry, Ireland, to Scots-Irish parents. After the death of his mother in 1739, his father emigrated to the British colonies in America with Charles and two or three brothers. The father died at sea, and the penniless boys were separated in America. Charles was cared for by a blacksmith in New Castle, Delaware, and was educated in New London, Pennsylvania. In 1750 he became a tutor in Latin at the Philadelphia Academy.

During the French and Indian War, Thomson was an opponent of the Pennsylvania proprietors' American Indian policies. He served as secretary at the Treaty of Easton (1758), and wrote An Enquiry into the Causes of the Alienation of the Delaware and Shawanese Indians from the British Interest (1759), which blamed the war on the proprietors. He was allied with Benjamin Franklin, the leader of the anti-proprietary party, but the two men parted politically during the Stamp Act crisis in 1765. Thomson became a leader of Philadelphia's Sons of Liberty. He was married to the sister of Benjamin Harrison V, another signer, as delegate, of the Declaration of Independence.[1]

Thomson was a leader in the revolutionary crisis of the early 1770s. John Adams called him the "Samuel Adams of Philadelphia". Thomson served as the secretary of the Continental Congress through its entirety. Through those 15 years, the Congress saw many delegates come and go, but Thomson's dedication to recording the debates and decisions provided continuity. Along with John Hancock, president of the Congress, Thomson's name (as secretary) appeared on the first published version of the Declaration of Independence in July 1776. 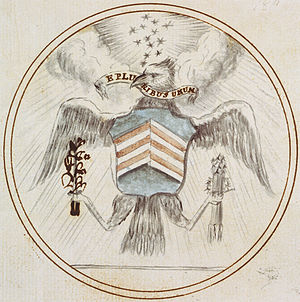 Thomson's role as secretary to Congress was not limited to clerical duties. According to biographer Boyd Schlenther, Thomson "took a direct role in the conduct of foreign affairs." Fred S. Rolater has suggested that Charles Thomson was essentially the "Prime Minister of the United States".[2] Thomson is also noted for designing, with William Barton, the Great Seal of the United States. The Great Seal played a prominent role in the January 14, 1784, (Ratification Day) ratification of the Treaty of Paris.[3] Britain's representatives in Paris initially disputed the placement of the Great Seal and Congressional President Thomas Mifflin's signature, until mollified by Benjamin Franklin.[4]

But Thomson's service was not without its critics. James Searle, a close friend of John Adams, and a delegate, began a cane fight on the floor of Congress against Thomson over a claim that he was misquoted in the "Minutes" that resulted in both men being slashed in the face. Such brawls on the floor were not uncommon, and many of them were promoted by argument over Thomson's recordings. Political disagreements prevented Thomson from getting a position in the new government created by the United States Constitution. Thomson resigned as secretary of Congress in July 1789 and handed over the Great Seal, bringing an end to the Continental Congress. He spent his final years at Harriton House in Bryn Mawr, Pennsylvania working on a translation of the Bible. He also published a synopsis of the four evangelists in 1815.[5] In retirement, Thomson also pursued his interests in agricultural science and beekeeping.

According to Thomas Jefferson, writing to John Adams, Thomson became senile in his old age, unable to recognize members of his own household. "Is this life?" Jefferson asked. "It is at most but the life of a cabbage; surely not worth a wish." (From Thomas Jefferson to Wilson Cary Nicholas, 28 January 1819)

According to the publisher's note of the Historical Printing Society edition of Thomas Jefferson's Notes on the State of Virginia (1894), edited by John Leicester Ford[1], Charles Thomson contributed a 25-page appendix to the original English publication, published by John Stockdale of London in a run of approximately 200 copies. In 1853 JW Randolph and Company [2] republished the work incorporating various materials from the Estate provided by Jefferson's literary executor Thomas Jefferson Randolph. The new publication corrected some errors in the original Stockdale publication, including an error in the original publication which Jefferson made note of in an 1785 missive to Thomson: "... Pray ask the favor of Colo Monroe in page 5, line 17, to strike out the words 'above the mouth of the Appomattox,' which makes none sense of the passage ...". The Historical Printing Society publication removes Thomson's notes from the appendix and instead offers them in footnote form throughout the work according to the original plates to which they refer.