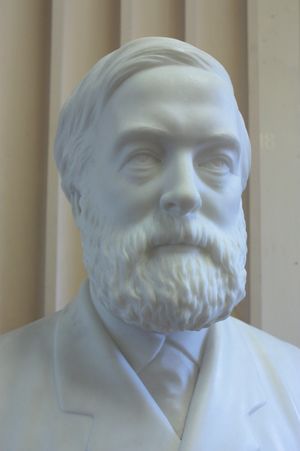 Sir Charles Wyville Thomson FRSE FRS FLS FGS FZS (5 March 1830 – 10 March 1882) was a Scottish natural historian and marine zoologist. He served as the chief scientist on the Challenger expedition; his work there revolutionised oceanography and led to his knighthood.

Thomson was born at Bonsyde, in Linlithgow, West Lothian, on 5 March 1830, the son of Andrew Thomson, a surgeon in the service of the East India Company, and Sarah Ann Drummond Smith. He was baptised Wyville Thomas Charles Thomson, and only changed his name late in life, in 1876.[6]

He was educated under Charles Chalmers at Merchiston Castle School, then from 1845 studied medicine at the University of Edinburgh (graduating MD). However, his focus turned from medicine towards natural science, and he joined the Botanical Society of Edinburgh in 1847, and soon after became secretary to the Royal Physical Society of Edinburgh. In 1850 he was attending the botany class of John Hutton Balfour at the university.

Wyville Thomson is remembered for his studies of the biological conditions of the deep seas. Being interested in crinoids, and prompted by the results of the dredgings of Michael Sars in the deep sea off the Norwegian coasts, he persuaded the Royal Navy to grant him use of HMS Lightning and HMS Porcupine for deep sea dredging expeditions in the summers of 1868 and 1869. They showed that animal life existed down to depths of 650 fathoms (1200 m), that all marine invertebrate groups are present at this depth, and that deep-sea temperatures are not as constant as had been supposed, but vary considerably, and indicate oceanic circulation. These results were described in The Depths of the Sea, which he published in 1873.

The remarkable hydrographic and zoological results which Wyville Thomson had demonstrated, in addition to the growing demands of ocean telegraphy, soon led to the Royal Navy to grant use of HMS Challenger for a global expedition. Wyville Thomson was selected as chief scientist, and the ship sailed on 23 December 1872.

The Challenger Expedition was deemed a great success, and on his return Wyville Thomson received a number of academic honours, as well as a knighthood. In 1873 he published "Depths of the Sea" based on initial findings from the expedition.[7] In 1880 he published two volumes (having completed writing in 1877), The Voyage of the Challenger in the Atlantic, a preliminary account of the results of the voyage. He spent the next two years working on administrative duties connected with the publication of the full monograph of the voyage. Wyville Thomson had a highly strung mentality, and his health was generally poor throughout his life. He found dealing with publishers over the requirements of publishing 50 volumes of detailed illustration and scientific description enormously stressful. In 1879 he ceased to perform his university duties, gave up overseeing the reports of the expedition in 1881, took to his bed and died a broken man at Bonsyde on 10 March 1882. The publishing was finally completed by his friend and colleague Sir John Murray. Wyville Thomson is commemorated in the stained glass window above the altar in St. Michael's Parish Church, Linlithgow and his headstone is in the churchyard. In addition the Wyville-Thomson Ridge in the North Atlantic Ocean is named after him. 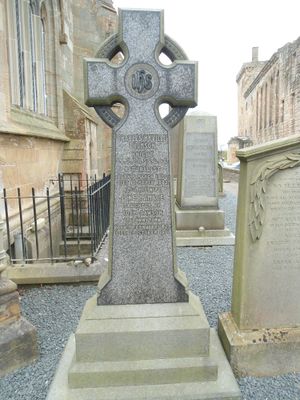