Charles Ogier de Batz de Castelmore, Comte d'Artagnan (French pronunciation: ​[ʃaʁl oʒje də bats də kastɛlmɔʁ kɔ̃t daʁtaɲɑ̃]) (c. 1611 – 25 June 1673) served Louis XIV as captain of the Musketeers of the Guard and died at the Siege of Maastricht in the Franco-Dutch War. A fictionalized account of his life by Gatien de Courtilz de Sandras formed the basis for the d'Artagnan Romances of Alexandre Dumas, most famously including The Three Musketeers (1844). The heavily fictionalized version of d'Artagnan featured in Dumas' works and their subsequent screen adaptations is now far more widely known than the real historical figure. 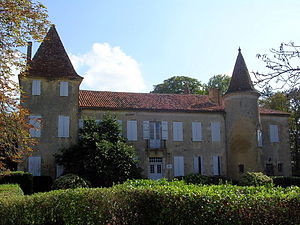 D'Artagnan was born near Lupiac in south-western France. His father, Bertrand de Batz (de Baatz), was the son of a newly ennobled merchant, Arnaud de Batz, who purchased the castle of Castelmore. Charles de Batz went to Paris in the 1630s, using the name of his mother, daughter of an illustrious family, Françoise de Montesquiou d'Artagnan. D'Artagnan found a way to enter into the Musketeers in 1632 through the support of his uncle, Henri de Montesquiou, Comte d'Artagnan, father of the field marshal Pierre de Montesquiou d'Artagnan, or perhaps thanks to the influence of Henri's friend, Monsieur de Tréville (Jean-Armand du Peyrer, Comte de Troisville).[1] While in the Musketeers, d'Artagnan sought the protection of the influential Cardinal Mazarin, France's principal minister since 1643. In 1646, the Musketeers company was dissolved, but d'Artagnan continued to serve his protector Mazarin. 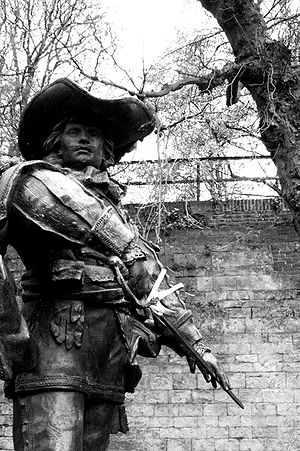 Statue of d'Artagnan in Maastricht

D'Artagnan had a career in espionage for Cardinal Mazarin, in the years after the first Fronde. Due to d'Artagnan's faithful service during this period, Louis XIV entrusted him with many secret and delicate situations that required complete discretion. He followed Mazarin during his exile in 1651 in the face of the hostility of the aristocracy. In 1652 d'Artagnan was promoted to lieutenant in the Gardes Françaises, then to captain in 1655. In 1658, he became a second lieutenant in the newly reformed Musketeers. This was a promotion, as the Musketeers were far more prestigious than the Gardes-Françaises.

D'Artagnan was famous for his connection with the arrest of Nicolas Fouquet. Fouquet was Louis XIV's finance commissioner and aspired to take the place of Mazarin as the King's advisor. Fouquet was also a lover of grand architecture and employed the greatest architects and artisans in the building of his Chateau Vaux-le-Vicomte. He celebrated the completion with a most extravagant feast, at which every guest was given a horse. The king however felt upstaged by the grandeur of the home and event and, suspecting that such magnificence could only be explained through Fouquet's pilfering the royal treasury, three weeks later had d'Artagnan arrest Fouquet. To prevent his escape by bribery, d'Artagnan was assigned to guard him for four years until Fouquet was sentenced to life imprisonment.

In 1667, d'Artagnan was promoted to captain-lieutenant of the Musketeers, the effective commander as the nominal captain was the King. As befitted his rank and position, he could be identified by his striking burgundy, white and black livery—the colours of the commanding officer of the Musketeers. Another of d'Artagnan's assignments was the governorship of Lille, which was won in battle by France in 1667. D'Artagnan was an unpopular governor and longed to return to battle. He found his chance when Louis XIV went to war with the Dutch Republic in the Franco-Dutch War. After being recalled to service, d'Artagnan was subsequently killed in battle on June 25, 1673, when a musket ball tore into his throat at the Siege of Maastricht. The French historian Odile Bordaz believes that he was buried in Saint Peter and Paul Church in Wolder, the Netherlands.[2] 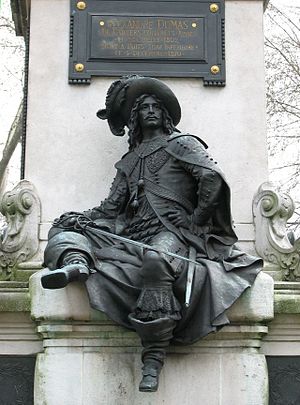 Statue of d'Artagnan on the Dumas monument in Paris.

The real d'Artagnan's life was used as the basis for Gatien de Courtilz de Sandras' novel Les mémoires de M. d'Artagnan. Alexandre Dumas in turn used Sandras' novel as the main source for his d'Artagnan Romances (The Three Musketeers, Twenty Years After and The Vicomte de Bragelonne), which cover d'Artagnan's career from his humble life's beginnings in Gascony to his death at Maastricht. Although Dumas knew that Sandras's version was heavily fictionalised, in the preface to The Three Musketeers he affected to believe that the memoirs were real, in order to make his novel more believable.

D'Artagnan is initially portrayed by Dumas as a hotheaded youth, and tries to engage the Comte de Rochefort and the three musketeers, Athos, Porthos, and Aramis in single combat. He quickly becomes friends with the musketeers, and has a series of adventures which put him at odds with Cardinal Richelieu, then First Minister of France. In the end, Richelieu is impressed by d'Artagnan, and makes him a Lieutenant of the Musketeers. This begins his long career of military service, as detailed in the sequels to Dumas's famous novel. Some scholars believe aspects of D'Artagnan are drawn from the life and character of Dumas's mulatto father, the General Thomas-Alexandre Dumas, as when D'Artagnan challenges Porthos, Athos, and Aramis to duels on the same afternoon, when Dumas describes his face as "brown," or on an incident in General Dumas's youth when he was insulted, or on General Dumas's youthful companionship with fellow soldiers in the Queen's Dragoons.[3]

D'Artagnan's role among the Musketeers is one of leadership (his skills and brains impress the musketeers greatly), but he is also regarded as a sort of protégé given his youth and inexperience. The musketeers (especially Athos) see him not only as a best friend and fellow musketeer (despite his initial job as a guard) but as a son. They are very protective of him, though they usually let him take care of himself like the others.

Another Comte d'Artagnan, Pierre de Montesquiou, contributed the idea that Dumas's d'Artagnan should become a Marshal of France.[citation needed] Towards the end of the story, his death at the siege of Maastricht is given an extra tragic twist - he is mortally wounded whilst reading the notice of his promotion to the highest rank.

Actors who have played d'Artagnan on screen include: