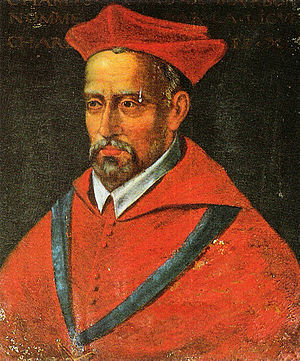 Charles de Bourbon (22 September 1523 – 9 May 1590) was a French cardinal. The Catholic League considered him the rightful King of France after the death of Henry III of France in 1589.

He was born at La Ferté-sous-Jouarre, in what is now the department of Seine-et-Marne, the eighth child of Charles IV de Bourbon, duke of Vendôme. His mother was Françoise d'Alençon.

When the duke of Alençon and Anjou died childless in 1584 while King Henry III of France was also still childless it was clear that the house of Valois would come to an end with the death of the king and the succession to the French throne would then pass to the house of Bourbon-Vendôme who were descended from Louis IX. However, the senior member of the family, Henry III of Navarre (son of Charles's late elder brother Antoine), was a Protestant. The Catholic League, party to the French Wars of Religion, excluded all Protestants from the succession, which made Charles de Bourbon their champion. In the secret Treaty of Joinville of 31 December 1584 he was anointed by the leaders of the league and a representative of Philip II of Spain. Henry III had Charles imprisoned in the castle of Blois on 23 December 1588. He was transferred from one castle to another, presumably to prevent escape. On Henry III's death in 1589, the League proclaimed Charles king, while he was still a prisoner and in the castle of Chinon. He was recognized as Charles X by the parliament of Paris on 21 November 1589. His prison was considered too close to Catholic territory, so he was again transferred, this time to Fontenay-le-Comte. The Catholic League issued coins in his name from 2 August 1589 to his death from 15 Mints, including Paris. Charles, however, renounced the royal title and recognized his nephew Henry IV, whose succession was disputed by the Catholic League. He died in the castle of Fontenay-le-Comte.

When the Comte d'Artois ascended the French throne in 1824, he definitively demonstrated Charles de Bourbon's lack of legitimacy by styling himself Charles X of France.