He descended from the dynasty of the seigneurs of La Vieuville and was the son of Robert, seigneur de La Vieuville.[4] Being a grandnephew to a finance minister of both Henry III and Henry IV he had good connections at court.[5] He started his career being Captain of the Garde Écossaise,[6] where he quickly rose to favour of the king, so that already in 1619 he became a knight of the king's orders.[7] As the year 1623 passed, the king (who always sought an effective model of governance) found virtually all his major advisors (like Brûlart and Puysieux) and his previous superintendent, Henri de Schomberg, ineffective. This resulted partly because of an inclination towards Spain, the deadly enemy of France, by some of the ministers, as well as the inability of the military man Schomberg of governing the finances.[8] This vacuum of power was filled by the trusted captain of the king's guards. During the years he was superintendent, and due to the fact that he was the king's only advisor, he had a very important role at the French court. His views went quite well with Louis XIII's ‘’bon français’’ (good Frenchman) views. He advised the king to side with the Dutch and had the idea to interfere directly in the Bündner Wirren.[9] Yet he didn't prove to fulfill quite what Louis XIII expected and Louis XIII became very disappointed with him. La Vieuville had grown very arrogant and incompetent and members of his family were very corrupt.[10] Another factor was that Cardinal Richelieu who had just entered the Royal Council, had previously published various pamphlets and spread several rumours against his rival La Vieuville, in order to become the king's advisor himself.[11] Finally, he should have been executed, yet he fled from France to the Spanish Netherlands.[12] Later in Louis XIII's reign he was pardoned and returned to France, eventually becoming superintendent once more during Louis XIV's early reign.[13] 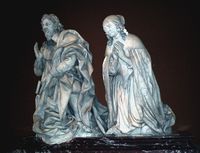 La Vieuville married Marie Bouhier de Beaumarchais in 1611. Marie was the daughter of Vincent Bouhier, seigneur de Beaumarchais and held the titles of dame de Nogent-l'Anaud and baronne de Saint-Martin de Blois. She had a sister, Lucrèce, who was married to Nicolas de L'Hôpital.

La Vieuville had all his 13 children with Marie: