From Infogalactic: the planetary knowledge core
Jump to: navigation, search
Not to be confused with Charles the Bold. 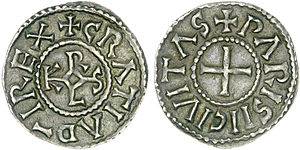 Denier of Charles the Bald struck at Paris

Charles the Bald (13 June 823 – 6 October 877) was the King of West Francia (843–77), King of Italy (875–77) and Holy Roman Emperor (875–77, as Charles II). After a series of civil wars that began during the reign of his father, Louis the Pious, Charles succeeded by the Treaty of Verdun (843) in acquiring the western third of the Carolingian Empire. He was a grandson of Charlemagne and the youngest son of Louis the Pious by his second wife, Judith.

Struggle against his brothers

He was born on 13 June 823 in Frankfurt,[1] when his elder brothers were already adults and had been assigned their own regna, or subkingdoms, by their father. The attempts made by Louis the Pious to assign Charles a subkingdom, first Alemannia and then the country between the Meuse and the Pyrenees (in 832, after the rising of Pepin I of Aquitaine) were unsuccessful. The numerous reconciliations with the rebellious Lothair and Pepin, as well as their brother Louis the German, King of Bavaria, made Charles's share in Aquitaine and Italy only temporary, but his father did not give up and made Charles the heir of the entire land which was once Gaul and would eventually be France. At a diet in Aachen in 837, Louis the Pious bade the nobles do homage to Charles as his heir.[2] Pepin of Aquitaine died in 838, whereupon Charles at last received that kingdom,[2] which angered Pepin's heirs and the Aquitainian nobles.[3]

The death of the emperor in 840 led to the outbreak of war between his sons. Charles allied himself with his brother Louis the German to resist the pretensions of the new emperor Lothair I, and the two allies defeated Lothair at the Battle of Fontenoy-en-Puisaye on 25 June 841.[4] In the following year, the two brothers confirmed their alliance by the celebrated Oaths of Strasbourg. The war was brought to an end by the Treaty of Verdun in August 843. The settlement gave Charles the Bald the kingdom of the West Franks, which he had been up until then governing and which practically corresponded with what is now France, as far as the Meuse, the Saône, and the Rhône, with the addition of the Spanish March as far as the Ebro. Louis received the eastern part of the Carolingian Empire, known then as East Francia and later as Germany. Lothair retained the imperial title and the Kingdom of Italy. He also received the central regions from Flanders through the Rhineland and Burgundy as king of Middle Francia.

Reign in the West

Denier (type Temple and cross) of Charles the Bald, minted at Reims between 840-864 (pre-Edict of Pistres). 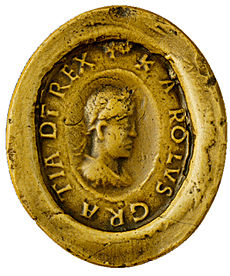 Seal of Charles the Bald

The first years of Charles's reign, up to the death of Lothair I in 855, were comparatively peaceful. During these years the three brothers continued the system of "confraternal government", meeting repeatedly with one another, at Koblenz (848), at Meerssen (851), and at Attigny (854). In 858, Louis the German, invited by disaffected nobles eager to oust Charles, invaded the West Frankish kingdom. Charles was so unpopular that he was unable to summon an army, and he fled to Burgundy. He was saved only by the support of the bishops, who refused to crown Louis the German king, and by the fidelity of the Welfs, who were related to his mother, Judith. In 860, he in his turn tried to seize the kingdom of his nephew, Charles of Provence, but was repulsed. On the death of his nephew Lothair II in 869, Charles tried to seize Lothair's dominions, but by the Treaty of Mersen (870) was compelled to share them with Louis the German.

Besides these family disputes, Charles had to struggle against repeated rebellions in Aquitaine and against the Bretons. Led by their chiefs Nomenoë and Erispoë, who defeated the king at the Battle of Ballon (845) and the Battle of Jengland (851), the Bretons were successful in obtaining a de facto independence. Charles also fought against the Vikings, who devastated the country of the north, the valleys of the Seine and Loire, and even up to the borders of Aquitaine. Several times Charles was forced to purchase their retreat at a heavy price. Charles led various expeditions against the invaders and, by the Edict of Pistres of 864, made the army more mobile by providing for a cavalry element, the predecessor of the French chivalry so famous during the next 600 years. By the same edict, he ordered fortified bridges to be put up at all rivers to block the Viking incursions. Two of these bridges at Paris saved the city during its siege of 885–886. 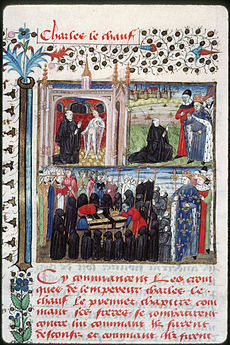 In 875, after the death of the Emperor Louis II (son of his half-brother Lothair), Charles the Bald, supported by Pope John VIII, traveled to Italy, receiving the royal crown at Pavia and the imperial insignia in Rome on 29 December. Louis the German, also a candidate for the succession of Louis II, revenged himself by invading and devastating Charles' dominions, and Charles had to return hastily to West Francia. After the death of Louis the German (28 August 876), Charles in his turn attempted to seize Louis's kingdom, but was decisively beaten at Andernach on 8 October 876.

In the meantime, John VIII, menaced by the Saracens, was urging Charles to come to his defence in Italy. Charles again crossed the Alps, but this expedition was received with little enthusiasm by the nobles, and even by his regent in Lombardy, Boso, and they refused to join his army. At the same time Carloman, son of Louis the German, entered northern Italy. Charles, ill and in great distress, started on his way back to Gaul, but died while crossing the pass of Mont Cenis at Brides-les-Bains, on 6 October 877.[5]

According to the Annals of St-Bertin, Charles was hastily buried at the abbey of Nantua, Burgundy because the bearers were unable to withstand the stench of his decaying body. He was to have been buried in the Basilique Saint-Denis and may have been transferred there later. It was recorded that there was a memorial brass there that was melted down at the Revolution.

Charles was succeeded by his son, Louis. Charles was a prince of education and letters, a friend of the church, and conscious of the support he could find in the episcopate against his unruly nobles, for he chose his councillors from among the higher clergy, as in the case of Guenelon of Sens, who betrayed him, and of Hincmar of Reims.

It has been suggested that Charles' nickname was used ironically and not descriptively; i.e. that he was not in fact bald, but rather that he was extremely hairy.[6] In support of this idea is the fact that none of his enemies commented on what would be an easy target. However, none of the voluble members of his court comments on his being hairy; and the Genealogy of Frankish Kings, a text from Fontanelle dating from possibly as early as 869, and a text without a trace of irony, names him as Karolus Caluus ("Charles the Bald"). Certainly, by the end of the 10th century, Richier of Reims and Adhemar of Chabannes refer to him in all seriousness as "Charles the Bald".[7]

An alternative or additional interpretation is based on Charles' initial lack of a regnum. "Bald" would in this case be a tongue-in-cheek reference to his landlessness, at an age where his brothers already had been sub-kings for some years.[8]

Charles married Ermentrude, daughter of Odo I, Count of Orléans, in 842. She died in 869. In 870, Charles married Richilde of Provence, who was descended from a noble family of Lorraine.