From Infogalactic: the planetary knowledge core
Jump to: navigation, search
This article is about Charles III of West Francia. For other uses, see Charles III.

Charles III (17 September 879 – 7 October 929), called the Simple or the Straightforward (from the Latin Carolus Simplex),[lower-alpha 1] was the King of Western Francia from 898 until 922 and the King of Lotharingia from 911 until 919–23. He was a member of the Carolingian dynasty.

Charles was the third and posthumous son of Louis the Stammerer by his second wife, Adelaide of Paris.[2] As a child, Charles was prevented from succeeding to the throne at the time of the death in 884 of his half-brother Carloman.[3] The nobles of the realm instead asked his cousin, Charles the Fat, to rule them.[4] He was also prevented from succeeding the unpopular Charles, who was deposed in November 887 and died in January 888, although it is unknown if his deposition was accepted or even made known in West Francia before his death. The nobility elected as king Odo, the hero of the Siege of Paris, though there was a faction that supported Guy III of Spoleto. Charles was put under the protection of Ranulf II, the Duke of Aquitaine, who may have tried to claim the throne for him and in the end used the royal title himself until making peace with Odo.

Finally, in 893 Charles was crowned by a faction opposed to Odo at Reims Cathedral, though he only became the effectual monarch with the death of Odo in 898.[5] 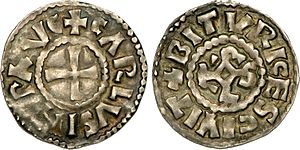 In 911, a group of Vikings led by Rollo besieged Paris and Chartres. After a victory near Chartres on 26 August, Charles decided to negotiate with Rollo, resulting in the Treaty of Saint-Clair-sur-Epte. For the Vikings' loyalty, they were granted all the land between the river Epte and the sea, as well as Brittany, which at the time was an independent country which France had unsuccessfully tried to conquer. Rollo also agreed to be baptised and to marry Charles' daughter, Gisela.

Also in 911, Louis the Child, the King of Germany, died, and the nobles of Lotharingia, who had been loyal to him, under the leadership of Reginar Longneck declared Charles their new king, breaking from Germans who had elected Conrad of Franconia king.[5] Charles had tried to win their support for years, for instance by marrying in April 907 a Lotharingian woman named Frederuna, and in 909, his niece Cunigunda married Wigeric of Lotharingia. He also defended the country against two attacks by Conrad, King of the Germans.[6] Queen Frederuna died on 10 February 917 leaving six daughters and no sons,[7] so the succession was uncertain. On 7 October 919 Charles married again to Eadgifu, the daughter of Edward the Elder, King of England, who bore his son, the future King Louis IV of France. By this time Charles' excessive favouritism towards a certain Hagano had turned the aristocracy against him. He endowed Hagano with monasteries that were already the benefices of other barons, alienating them. In Lotharingia he earned the enmity of the new duke, Gilbert, who declared for the German king Henry the Fowler in 919.[5] Opposition to Charles in Lotharingia was not universal, however; he retained the support of Wigeric.

Revolt of the nobles 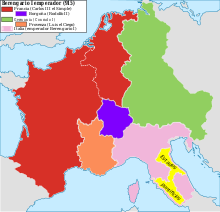 Realms ruled by Charles the Simple in 915 (red)

The nobles, completely exasperated with Charles' policies and especially his favoritism of count Hagano, seized Charles in 920.[8] But after negotiations by Archbishop Herveus of Reims the king was released.[8] In 922 the Frankish nobles revolted again led by Robert of Neustria.[8] Robert, who was Odo's brother, was elected king by the rebels and crowned in opposition to Charles, who had to flee to Lotharingia. On 2 July 922, Charles lost his most faithful supporter, Herveus of Reims, who had succeeded Fulk in 900. Charles returned with a Norman army in 923 but was defeated on 15 June near Soissons by Robert, who died in the battle.[5] Charles was captured and imprisoned in a castle at Péronne under the guard of Herbert II of Vermandois.[9] Robert's son-in-law Rudolph of Burgundy was elected to succeed him.[10] In 925 the Lotharingians were subsumed into the Kingdom of Germany. Charles died in prison on 7 October 929 and was buried at the nearby abbey of Saint-Fursy. His son by Eadgifu would eventually be crowned in 936 as Louis IV of France.[11] In the initial aftermath of Charles's defeat, Eadgifu and children had fled to England.[11]

Charles married first, in May 907, Frederuna, daughter of Dietrich, Count in the Hamaland.[2] Together they had six daughters:

Charles married secondly, in 919, Eadgifu of Wessex.[2] Together they had one son: