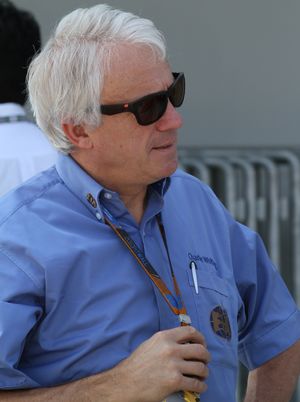 Charlie Whiting (born 1952[1]) is the FIA Formula One Race Director, Safety Delegate, Permanent Starter and head of the F1 Technical Department, in which capacities he generally manages the logistics of each F1 Grand Prix, inspects cars in parc fermé before a race, enforces FIA rules, and controls the lights that start each race.

His first job was assisting his brother Nick in preparing saloon and rally cars near the Brands Hatch racing circuit in England. In the mid seventies the brothers were running a Surtees in the 1976 British F5000 series for race driver Divina Galica. For the 1977 season Whiting joined Hesketh Racing at Easton Neston, near Silverstone. Following the demise of the team, he joined Bernie Ecclestone's Brabham team at Weybridge, where he would stay for the following decade, becoming chief mechanic for the World Drivers' Championship successes of Nelson Piquet in 1981 and 1983 and later rising to chief engineer, while Nick went on to open motor racing spare parts shop All Car Equipe in Wrotham, Kent, 5 miles away from Brands Hatch circuit. Nick was murdered in 1990, his dead body found on Rainham Marshes in Essex a month after his disappearance.[2]

In 1988 he became FIA Technical Delegate to Formula One and in 1997 he was appointed FIA Race Director and Safety Delegate.

During the 2005 United States Grand Prix, he was involved in a controversy when none of the tyres which Michelin had brought to Indianapolis were safe to use. The French tyre company was unable to produce new tyres with which to replace its seven customer Formula One teams' unsafe equipment and asked Whiting to install a chicane in Turn 13 of the Indianapolis Motor Speedway instead. He refused on the grounds that this would be unfair to the teams who were able to race safely on the existing track.[3]