Marie-Anne Charlotte de Corday d'Armont (27 July 1768 – 17 July 1793), known to history as Charlotte Corday (French: [kɔʁdɛ]), was a figure of the French Revolution. In 1793, she was executed by guillotine for the assassination of Jacobin leader Jean-Paul Marat, who was in part responsible, through his role as a politician and journalist, for the more radical course the Revolution had taken. More specifically, he played a substantial role in the political purge of the Girondins, with whom Corday sympathized. His murder was memorialized in a celebrated painting by Jacques-Louis David which shows Marat after Corday had stabbed him to death in his bathtub. In 1847, writer Alphonse de Lamartine gave Corday the posthumous nickname l'ange de l'assassinat (the Angel of Assassination). 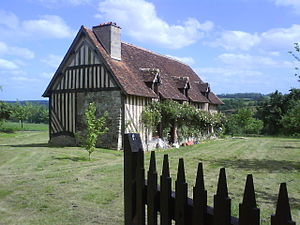 Born in Saint-Saturnin-des-Ligneries, a hamlet in the commune of Écorches (Orne), in Normandy, Charlotte Corday was a member of a minor aristocratic family. She was a fifth-generation matrilineal descendant of the dramatist Pierre Corneille. Her parents were cousins.[1]

While Corday was a young girl, her older sister and their mother, Charlotte Marie Jacqueline Gaultier de Mesnival, died. Her father, Jacques François de Corday, seigneur d'Armont (1737–1798), unable to cope with his grief over their death, sent Corday and her younger sister to the Abbaye-aux-Dames convent in Caen, where she had access to the abbey's library and first encountered the writings of Plutarch, Rousseau and Voltaire.[2]:154–5 After 1791, she lived in Caen with her cousin, Madame Le Coustellier de Bretteville-Gouville. The two developed a close relationship, and Corday was the sole heir to her cousin's estate.[2]:157

After the revolution radicalized and headed towards terror, Charlotte Corday began to sympathize with the Girondins. She admired their speeches and grew fond of many of the Girondist groups whom she met while living in Caen. She respected and revered them and thought it necessary to align herself with their party. She had an urge to get to know the members and regarded them as a party that would ultimately save France.[3] The Gironde represented a more moderate approach to the revolution and they, like Corday, were skeptical about the direction the revolution was taking. They opposed the Montagnards, who advocated a more radical approach to the revolution, which included the extreme idea that the only way the revolution would survive invasion and civil war was through terrorizing and executing those opposed to it.[4] The opposition to this radical thinking, coupled with the influence of the Gironde, ultimately led Corday to carry out her plan to murder the most radical of them all, Jean-Paul Marat.

The influence of Girondin ideas on Corday is evident in her words at her trial: "I knew that he Marat was perverting France. I have killed one man to save a hundred thousand." As the revolution progressed, the Girondins had become progressively more opposed to the radical, violent propositions of the Montagnards such as Marat and Robespierre. Corday's notion that she was saving a hundred thousand echoes this Girondin sentiment as they attempted to slow the revolution and reverse the violence that had escalated since the September Massacres of 1792. 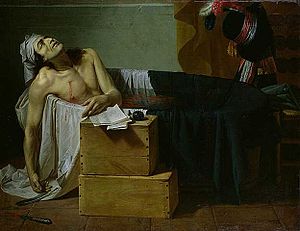 The Death of Marat by Guillaume-Joseph Roques {1793}; note the knife lying on the floor at lower left in the Roques and David versions 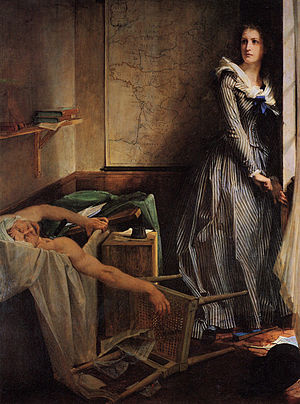 Charlotte Corday by Paul Jacques Aimé Baudry, posthumous (1860). Under the Second Empire, Marat was seen as a revolutionary monster and Corday as a heroine of France, as indicated by her location in front of the map.

Jean-Paul Marat was a member of the radical Jacobin faction which had a leading role during the Reign of Terror. As a journalist, he exerted power and influence through his newspaper, L'Ami du peuple ("The Friend of the People").

Corday's decision to kill Marat was stimulated not only by her revulsion at the September Massacres, for which she held Marat responsible, but by her fear of an all-out civil war.[2]:161 She believed that Marat was threatening the Republic, and that his death would end violence throughout the nation. She also believed that King Louis XVI should not have been executed.[2]:160 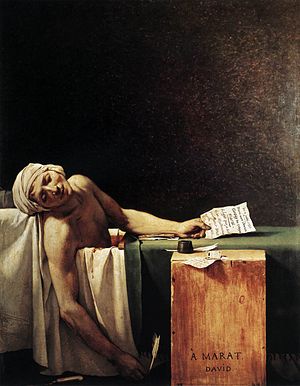 On 9 July 1793, Corday left her cousin, carrying a copy of Plutarch's Parallel Lives, and went to Paris, where she took a room at the Hôtel de Providence. She bought a kitchen knife with a six-inch blade. She then wrote her Addresse aux Français amis des lois et de la paix ("Address to the French people, friends of Law and Peace") to explain her motives for assassinating Marat.

Initially, she planned to assassinate Marat in front of the entire National Convention, intending to make an example out of him, but upon arriving in Paris she discovered that Marat no longer attended meetings because his health was deteriorating due to a skin disorder. She was then forced to change her plan. She went to Marat's home before noon on 13 July, claiming to have knowledge of a planned Girondist uprising in Caen; she was turned away by his wife, Simonne Evrard. On her return that evening, Marat admitted her. At the time, he conducted most of his affairs from a bathtub because of a debilitating skin condition. Marat wrote down the names of the Girondists that she gave to him, then she pulled out the knife and plunged it into his chest, piercing his lung, aorta and left ventricle.[citation needed] He called out, Aidez-moi, ma chère amie! ("Help me, my dear friend!") and died.

This is the moment memorialised by Jacques-Louis David's painting (illustration, right). The iconic pose of Marat dead in his bath has been reviewed from a different angle in Baudry's posthumous painting of 1860, both literally and interpretatively: Corday, rather than Marat, has been made the hero of the action. 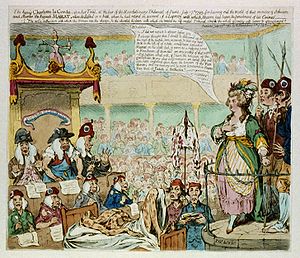 At her trial, when Corday testified that she had carried out the assassination alone, saying "I killed one man to save 100,000", she was likely alluding to Maximilien Robespierre's words before the execution of King Louis XVI. On 17 July 1793, four days after Marat was killed, Corday was executed by guillotine and her corpse was disposed of in the Madeleine Cemetery.

After her decapitation, a man named Legros lifted her head from the basket and slapped it on the cheek. Charles-Henri Sanson, the executioner, indignantly rejected published reports that Legros was one of his assistants. However, Sanson stated in his diary that Legros was in fact a carpenter who had been hired to make repairs to the guillotine.[5] Witnesses report an expression of "unequivocal indignation" on her face when her cheek was slapped. The oft-repeated anecdote has served to suggest that victims of the guillotine may in fact retain consciousness for a short while, including by Albert Camus in his Reflections on the Guillotine ("Charlotte Corday's severed head blushed, it is said, under the executioner's slap.").[6] This offense against a woman executed moments before was considered unacceptable and Legros was imprisoned for three months because of his outburst.[7] 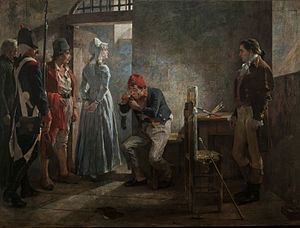 Charlotte Corday being conducted to her execution. By Arturo Michelena, 1889

Jacobin leaders had her body autopsied immediately after her death to see if she was a virgin. They believed there was a man sharing her bed and the assassination plans. To their dismay, she was found to be virgo intacta (a virgin).[8]

The assassination did not stop the Jacobins or the Terror: Marat became a martyr, and busts of him replaced crucifixes and religious statues that had been banished under the new regime.[citation needed] 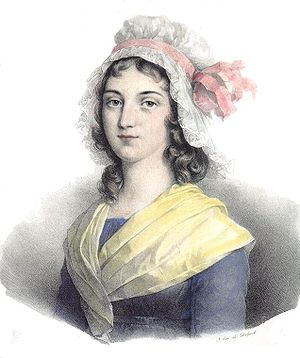