Charlotte County is a United States county located in the south central part of the Commonwealth of Virginia. Its county seat is the town of Charlotte Court House.[1] As of the 2010 census, the county population was 12,586.[2]

The county was formed in 1764 from Lunenburg County, and it is named for Queen Charlotte, wife of King George III of England. The county residents later became staunch supporters of the American Revolution, and Founding Father Patrick Henry was one of its most famous residents. His grave and the national memorial dedicated to him is located there.

The County is predominately rural and is one of the few counties in Virginia without a traffic signal (Bath County & Mathews County are the others). Charlotte is a semi-dry county, meaning restaurants may not serve liquor by the drink but beer and wine can be sold by grocery and convenience stores. 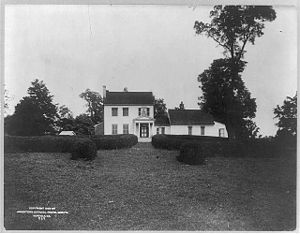 European settlement of the future county began in the early 18th century,[3] and early settlers included mostly English people, with some French Hugenots and Scotch-Irish.[4] After approximately fifty years of European settlement, the House of Burgesses established and incorporated Charlotte County in 1764 from part of Lunenburg County. The new county was named in honor of Charlotte of Mecklenburg-Strelitz, the Queen and wife of King George III of England.[5]

Residents of Charlotte County were heavily involved in the American Revolution. County delegates supported resolutions against the Stamp Act of 1765,[4] and the county government was the second governing body to declare independence from English rule.[3] In addition, Charlotte militia units fought under General Robert Lawson during the Yorktown campaign, which effectively lead to the end of the American War of Independence.[4] Finally, the final resting place and national memorial to revolutionary hero Patrick Henry is at Red Hill Plantation.[6]

Charlotte County has also played a role in other wars on American soil. An artillery company from Charlotte played a key role in the Battle of Craney Island during the War of 1812.[4] Also, a significant battle in the American Civil War occurred in Charlotte and Halifax counties during the Battle of Staunton River Bridge, which resulted in a victory for the Confederacy.[3]

The Board of Supervisors is the legislative policy making body for the County. It considers and adopts policies regarding administration, budget, finance, economic development, health, planning, public safety, childcare, recreation, sanitation and waste removal. The Board appropriates funds for all functions, including the schools, Social Services, Law Enforcement and operation of courts. The Board's regularly scheduled meetings are held on the third Tuesday of each month at 7:00 pm in the Board of Supervisors Room of the County Administration Building, 250 LeGrande Avenue, Suite A, (PO Box 608) Charlotte Court House, Virginia, 23923.[1]

Thomas Jones (I) is the sheriff. The Sheriff is responsible for overseeing criminal investigations, calls for service, court room security, service of civil process and the operation of the Charlotte County jail.

Commissioner of the Revenue

Naisha N. Pridgen (I) is the Commissioner of the Revenue.

William E. Green, Jr. (I) is the Commonwealth's Attorney, a position similar to that of District's Attorney in many other states.

Patricia P. Berkeley (I) is the Treasurer.

Charlotte County's administrator is Russell B. Clark. Clark's duties include and are not limited to: general administration, personnel management and supervision of all county departments, budget preparation, funds management, purchasing, property management, compliance with laws, regulations and ordinances, coordination with independent agencies and the community, representing the Board at meetings and functions, and any and all other duties imposed by the Board and by law to facilitate the accomplishment of the work of county government.

Members of the School Board