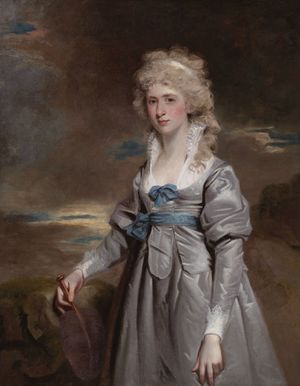 She spent most of her childhood with her parents at the Boyle Farm mansion in Thames Ditton. (Her mother, the second daughter of Frances Coningsby, had bought this estate in 1784 from Lord Hertford, who was grieving over the death of his wife there two years earlier.) Charlotte did much artistic decoration in Boyle Farm and much of it has survived to the present day.

In London on 3/4 August 1791, more than a year after her mother's death, Charlotte married Lord Henry FitzGerald, a member of the Duke of Leinster's family. After petitioning King George III in 1790, she eventually (in 1806) established her entitlement to the Barony of de Ros, the most ancient baronial title in England, legally changing her name by Royal Licence on 6 October of the same year to Charlotte FitzGerald-de Ros. Members of the de Ros family lived in Thames Ditton for a long while. They had links with the brightest of society, from the Duke of Wellington downwards. Henry's younger brother was the notorious Lord Edward FitzGerald. Charlotte died on 9 January 1831.