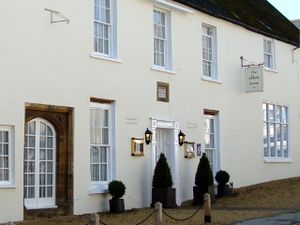 The history of Charmouth dates back to the Iron Age when a Celtic tribe, the Durotriges, founded a settlement. Evidence of hill forts can still be seen in the area. The name Charmouth originated from the Saxon 'Cerne' meaning stony river, Charmouth was therefore known as 'Cernmunde'.[3]

During the Saxon period, the neighbouring coast was particularly subject to the invasions of the Danes, concerning whom so much has been written. In 787, the Danes, Northern men, or Normans, landed at Portland from three ships, to reconnoitre the country, which they did without interruption, as the Saxons had neglected their marine. A. D. 833, according to the Saxon Chronicle, though some of our historians place the event in 831 or 832, a dreadful battle was fought at Charmouth. The Danes having met with repulses in other parts of the kingdom sailed to Charmouth where having landed, Speed says, "they made cruel ravage and slaughter." Their fleet consisted of 35 ships, containing a powerful army: their whole force, Huntingdon remarks, must have amounted to 17,500 men; other writers have estimated their numbers at about 15,000. Egbert collected the whole force of the county, and marched to attack them, after they had continued their ravages, according to Matthew of Westminster, about a twelve month. The king had nearly succeeded in cutting them off as they were forming; he threw them into great confusion, but continual supplies of men from the ships turned the scale in their favour. The Saxons were routed: the night alone prevented their destruction by the infuriated invaders, by the favour of which, Speed says, the king hardly escaped. Among the number of the slain were two earls, his principal officers, Dudda and Osmond, Wigen, bishop of Sherborne, and Hereferth, bishop of Winton. The Danes, finding a settlement would be liable to the attacks of the brave Egbert, retired to their ships with precipitation, and set sail. They continued to hover about the coast. In 840, they effected a landing on the same spot, (set Carrum,) from the same number of ships. Ethelwulf's army, which he headed in person, advanced to encounter them: a bloody battle ensued, which, after a desperate struggle, terminated in the Danes remaining masters of the field, though they shortly afterwards retired without any spoil. A successive series of invasions followed.

In 1086 in the Domesday Book Charmouth was recorded as Cernemude;[5] it had 22 households, 3 ploughlands and 16 acres (6.5 ha) of meadow. It was in Whitchurch Canonicorum Hundred and the tenant-in-chief was Count Robert of Mortain.[6]

The inn now known as Abbots House gave shelter to the fugitive King Charles II on 22 September 1651, when he came disguised looking for a boat to take him to France following his defeat at the Battle of Worcester. A small trading ship was found bound for St Malo. The master, Stephen Limbry, agreed to pick up the King from Charmouth beach and transport him to the ship, but just two hours before the pick up Limbry told his wife, who locked him in his room and stole his clothes to ensure he would not become involved.[7] On the following day Charles left Charmouth pursued by troops, who were alerted to his presence by an employee of the inn.[8]

The buildings on either side of Charmouth's main street vary in age; some of the smaller cottages date from the 17th or 18th centuries, while others are built in later Regency style. A number of buildings in the village have listed building status.[9]

Abbots House (previously The Queens Armes Hotel) is a grade II listed, early 16th-century house that was re-faced in the 18th century.[10] It once belonged to Forde Abbey and the badge of Catherine of Aragon was found worked into the plaster of an upstairs room.[11]

In the eighteenth and nineteenth centuries Charmouth village was a noted resort, with visitors including novelist Jane Austen who wrote that it was "a nice place for sitting in unwearied contemplation".[citation needed] 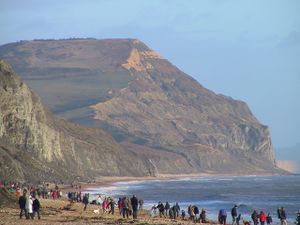 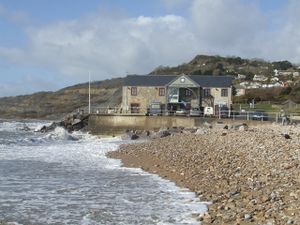 Charmouth is in its own electoral ward, which also includes Wootton Fitzpaine and the surrounding area. It had a population of 1,697 in the 2011 census.[12] This ward is one of 32 that comprise the West Dorset parliamentary constituency, which is currently represented in the UK national parliament by the Conservative Oliver Letwin.

Charmouth is a coastal village which overlooks Lyme Bay. It lies among steep hills and is sited on a sloping site to the west of the River Char, close to its mouth at the English Channel. Stonebarrow Hill is to the east, Black Venn to the west, and Golden Cap, the highest cliff on the south coast of England at 191 metres (627 ft), is 2.5 miles (4.0 km) to the east. The National Trust owns significant portions of the surrounding area.

See also: List of places on the Jurassic Coast

The cliffs above the beach are a noted source of fossils from the Jurassic period. Charmouth Heritage Coast Centre acts as a visitor centre for the Jurassic Coast, a World Heritage Site, and identifies fossils found in the area. Fossil-hunters walk the beaches between Lyme Regis and Charmouth but have to be wary of tides and landslips.

The Jurassic Coast, 155 kilometres (96 mi) long, extends from Orcombe Point near Exmouth in the west, to Old Harry Rocks on the Isle of Purbeck, in the east.[13] The coastal exposures along the coastline provide a continuous sequence of Triassic, Jurassic and Cretaceous rock formations spanning approximately 185 million years of the Earth's history. The localities along the Jurassic Coast includes a large range of important fossil zones.

There are shops on the coast to serve locals and tourists, including the Fossil shop, and cafe. The Charmouth Heritage Coast Centre is based in a long-disused cement factory on the foreshore. Charmouth Primary School is located to the south of the village within view of the beach.