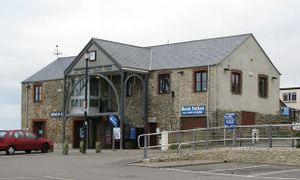 The Charmouth Heritage Coast Centre is based in the upstairs floor of a long-disused cement factory on the foreshore of Charmouth in Dorset, England.

The centre operates as an independent charitable trust within the larger framework of the UNESCO Dorset and East Devon Coast World Heritage Site, known as the "Jurassic Coast". The Jurassic Coast stretches over a distance of 155 kilometres (96 mi), from Orcombe Point near Exmouth, in the west, to Old Harry Rocks, in the east.[1] The coastal exposures along the coastline provide a continuous sequence of Triassic, Jurassic and Cretaceous rock formations spanning approximately 185 million years of the Earths history. The localities along the Jurassic Coast includes a large range of important fossil zones.

Entry to the centre and all of its displays is free and, as such, the centre is dependent upon money generated from walks and events as well as charitable donations from the public. The centre was set up in 1985 by local residents, in response to concerns about damage being done to the cliffs by fossil hunters. The role of the centre has always been primarily as an educator and it has undergone several phases of expansion as the demand from the public and from school groups has risen.

The most recent stage of expansion has seen the addition of a classroom, a feature which is likely to be copied,[original research?] in a number of new centres being planned for the length of the Jurassic Coast. Full-time staff and an army of volunteers are on hand throughout the year to identify fossil finds from the beach.

The Centre is frequently visited by visitors to Charmouth, but it is also a common destination for walkers and fossil-hunters from Lyme Regis, who walk along the beaches at low tide.