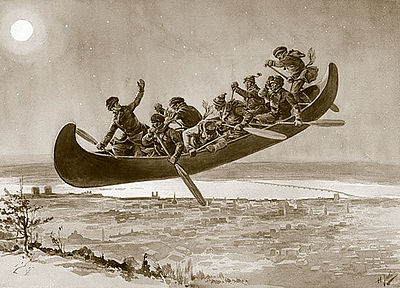 La Chasse-galerie also known as "The Bewitched Canoe" or "The Flying Canoe" is a popular French-Canadian tale of voyageurs who make a deal with the devil, a variant of the Wild Hunt. Its most famous version was written by Honoré Beaugrand (1848–1906). It was published in The Century Magazine in August 1892.

This particular story can be traced back to a French legend about a rich nobleman named Gallery who loved to hunt. He loved it so much that he refused to attend Sunday mass. As punishment for this sin he was condemned to fly forever through the night skies, chased by galloping horses and howling wolves, in a fashion reminiscent of the Wild Hunt.

When French settlers arrived in Canada, they swapped stories with the natives and the tale of Gallery was combined with an Indian legend about a flying canoe.

After a night of heavy drinking on New Year's Eve, a group of voyageurs working at a remote timber camp want to visit their sweethearts some 100 leagues away (300 miles). The only way to make such a long journey and be back in time for work the next morning is to run the chasse-galerie. Running the chasse-galerie means making a pact with the devil so that their canoe can fly through the air to their destination with great speed. However, the travellers must not mention God's name or touch the cross of any church steeple as they whisk by in the flying canoe. If either of these rules are broken during the voyage, then the devil will have their souls. To be safe, the men promise not to touch another drop of rum to keep their heads clear. The crew take their places in the canoe which then rises off the ground, and they start to paddle. Far below they see the frozen Gatineau River, many villages, shiny church steeples and then the lights of Montreal. The bewitched canoe eventually touches down near a house where New Year's Eve festivities are in full swing. No one wonders at the trappers'/loggers' sudden arrival. They are embraced with open arms and soon are dancing and celebrating as merrily as everyone else. Soon it is late and the men must leave if they are to get back to camp in time for work. As they fly through the moonless night, it becomes apparent that their navigator had been drinking as he steers the canoe on a dangerously unsteady course. While passing over Montreal they just miss running into a church steeple, and soon after the canoe ends up stuck in a deep snowdrift. At this point the drunken navigator begins swearing and taking the Lord's name in vain. Terrified the devil will take their souls, the men bind and gag their friend and elect another to steer. The navigator soon breaks his bonds and begins swearing again. The crew become more and more shaken at the possibility of losing their souls, and they eventually steer the bewitched canoe right into a tall pine. The men spill out and are knocked unconscious. The ending of the story changes from version to version. Sometimes the men are condemned to fly the canoe through hell and appear in the sky every New Year's Eve, but in all but one version all escape the terms the devil made.

Several different versions of this tale exist.[1] An Acadian version involves an axe handle. It stretches to accommodate as many as climb on.

Another variation has the devil himself steering and deliberately trying to break the rules on the return journey, at which point they threw him out of the canoe to save themselves.

In English this particular legend is known as "The Canoe", or "The Wild Hunt Bewitched". The second name is used to translate precisely chasse-galerie as it is known in Canadian French; the other term is much broader.

In Quebec, the best-known version is written by Honoré Beaugrand. This is the story of the Gatineau loggers who make a pact with the devil in order to steal a boat so they can visit their women. They are warned, however, not to blaspheme during the voyage, or touch crosses atop church steeples, and they must be back before six o'clock the next morning. Otherwise they would lose their souls. Beaugrand was a Freemason Luciferian. Luciferians were inspired by the ancient myths of Egypt, Rome and Greece, Gnosticism and traditional Western occultism. They considered Lucifer as an angelic light bearer. In his version, the devil (Lucifer) is rather generous, and allows the men to return unhurt and undamaged.

The tale appeared in a book of French-Canadian folktales called Legends of French Canada by Edward C. Woodley, published in 1931, republished in 1938.[2] The tale is told as a recollection of one of the men who made chasse-galerie. The men travel from St. Maurice to St. Jeanne. The return accident is credited to whiskey-blanc.[3]

An earlier volume in English, entitled The Flying Canoe (La Chasse-Galerie) was written by J.E. LeRossignol, by McLelland and Steward Publishers in 1929. In it, thanks is given (with no further publication information) to "the Toronto Star Weekly, and the Canadian Home Journal for their courteous permission to republish certain stories which appeared originally in these journals."[4]

A Canadian 40¢ postage stamp was issued in 1991 (as the Witched Canoe), illustrating this legend (Canadian Scott #1334 or #1445), which forms part of a series on Canadian folktales.

One of the oldest rides at Montreal's La Ronde amusement park, La Pitoune, uses this legend as inspiration. It is a basic sawmill log ride, but overhead is a representation of the flying canoe, with the devil perched behind the terrified men. The high bench at the back of the log-cars is therefore referred to as "the devil-seat."

The legend serves as the label motif for Maudite, an ale produced by the Unibroue brewery of Quebec.

The National Film Board of Canada produced a short animated film of this The Legend of the Flying Canoe (La Chasse-galerie).[5]

Montreal folk metal band Blackguard use an image of the flying canoe on the cover of their 2009 album Profugus Mortis. Included on the album is a song called "The Last We Wage", whose lyrics are based on this legend.

During the Opening Ceremony for the 2010 Winter Olympics in Vancouver, a canoe containing fiddler Colin Maier was lowered from the ceiling in an allusion to the legend.