Some of the first European settlers of what would become the county were English Quakers, who settled along the Haw and Eno rivers.[5] The county was formed in 1771 from Orange County. It was named in 1758 for William Pitt, 1st Earl of Chatham, who served as British Prime Minister from 1766 to 1768 and opposed harsh colonial policies. In 1907, parts of Chatham County and Moore County were combined to form Lee County.

The award-winning PBS documentary, Family Name, notes Chatham County as the place where men of the Alston family fathered children with African-American slaves, leading to Alston descendants who were African American, as well as European-American branches of the family.[6][7]

George Moses Horton, Historic Poet Laureate of Chatham County, (1797?-1883) lived most of his life in Chatham County and is among the few slaves to have published material while still a slave.[8][9][10]

Moncure once served as the westernmost inland port in the state, as steamships could travel between it and the coast.[11]

On March 25, 2010, the Chatham County Courthouse, built in 1881, caught fire while undergoing renovations. It has now been rebuilt. For more information, see Pittsboro, North Carolina.

Spanning the southern border of Chatham County, the Deep River Coal Field contains the only known potentially economic bituminous coal deposits in the state. Coal was mined here artisanally in colonial times, and commercially beginning from the early 1850s.

The communities of Carbonton and Cumnock (formerly called Egypt in Lee County) developed with the coal mining industry. Much of the coal mined in the field during the Civil War was used for Confederate operations.[12]

The Coal Glen Mine Disaster of the 1920s, frequent flooding by the Deep River, the depth of the coal seam, and faulting of the seam sealed the fate of the mines. Production ceased in 1953.[13]

The county was long dependent on agriculture as the basis of the economy. The area's relatively unfertile natural soil conditions (composed mostly of the hard red clay soil common to the Piedmont), did not support the cultivation of commodity cash crops such as tobacco; this was never important in the county's economy. The production of livestock has always been more important to the county, especially the breeding of cattle and poultry. The county once had a thriving dairy industry, but in recent years most farms have been sold and developed. The county is one of the state leaders in the poultry industry. Forage crops such as hay are also grown in large quantities in the county. Carolina Farm Stewardship Association has been housed in Chatham County along with many organic agriculture farmers.

Industrial growth in the county has been focused around the Siler City and Moncure areas of the county, with Moncure dominating. Companies in that area include, Progress Energy, Boise Cascade, Honeywell, and Arauco. Brick manufacturing, which makes use of the local red clay soil, has been an important economic factor in the Moncure area, with several brick plants operating there and in Brickhaven.

3M operates a greenstone mine south of Pittsboro along US 15-501. Greenstone is processed to manufacture roofing-shingle granules. In 2007, residents opposed to industrialization successfully blocked a similar quarry from being developed in the western part of the county.

The scenic rural environment has attracted many artists (Chatham Artists Guild), and arts-related tourism is a growing economic influence.

Chatham County has a deep tradition in southern music. Tommy Thompson, of the Red Clay Ramblers, and Tommy Edwards have entertained for decades with traditional, old time and bluegrass. Artists in many styles of music issue from this deep storehouse of talent, from rock and roll to big band. Of late, Shakori Hills Grassroots Festival of Music and Dance hosts various styles of music. A four-day outdoor festival is held twice each year, in April and October. Artists who have performed at Shakori Hills include Patty Loveless, Ralph Stanley, Hugh Masekela, Donna the Buffalo, Carolina Chocolate Drops, Avett Brothers and Jim Lauderdale. Shakori Hills is also the location of the Hoppin John Fiddlers Convention and Mountain Aid benefit concert.

The county lies totally within the Piedmont physiographic region. The topography of the county is generally gently rolling with several higher hills rising above the general terrain. One of these hills, Terrells Mountain, on the Orange County line is the transmitter site for several radio and TV stations for the Raleigh-Durham market, including WUNC-TV 4, WDCG(G105), WNCB (93.9 Kiss FM), and WUNC 91.5 FM (NC Public Radio).

The county lies within the Cape Fear River drainage basin. The Cape Fear River begins in the county near the community of Moncure, at the confluence of the Haw River and the Deep River below Jordan Lake. B. Everett Jordan Lake, a major reservoir and flood-control lake, is located within the New Hope River basin and lies mainly in eastern Chatham County. The lake is owned by the US Army Corps of Engineers and is partially leased by the state of North Carolina as Jordan Lake State Recreation Area.

Much of the eastern part of the county lies within the Triassic Basin, a subregion of the Piedmont. Much of the bedrock in the county is volcanic in origin and formed during the Triassic period (hence the name). The Triassic origins have led to the formation of coal deposits in the southern part of the county. The Boren Clay Products Pit just north of Gulf in extreme southern Chatham County is a place where Triassic flora fossils persist.[15][16] The volcanic origins also led to the creation of high amounts of metamorphic-based rocks in the county. The county lies on the Carolina Slate Belt. Soils in the county are mostly clay based and have a deep red color, as do most soils in the Piedmont. Groundwater in the county is generally full of minerals and tends to be "hard" if not softened. Mineral-based water was the attraction at Mt. Vernon Springs during the latter part of the 19th century and the early part of the 20th century. A resort spa was established at the mineral springs. Visitors would drink the water in the hopes of curing ailments and diseases. The resort closed in the early 20th century and is now gone. The springs are still there and are maintained by a local church.

A five-member Board of Commissioners governs Chatham County. The commissioners are elected at large, but must reside within a particular district. The members of the Chatham County Board of Commissioners are elected for four-year terms, but the terms are staggered so that all five seats are not up for election at the same time. The November 2010 election cycle brought an historic change to the political landscape with the election of three republicans; Brian Bock, Walter Petty, and Pamela Stewart. Only one other republican (John Grimes) has ever been elected in Chatham County since Reconstruction after the Civil War.

Current Chatham County Board of Commissioners:

Commissioners appoint a county manager who administers the day-to-day business of the county, including personnel and budget oversight. The Board of Commissioners also appoints the county attorney, clerk to the board of commissioners who is responsible for meeting agendas and minutes, and the tax administrator who manages all tax office functions, but they do not appoint other county staff positions.

Chatham County is a member of the regional Triangle J Council of Governments.[18]

Chatham County contributes funds to, but does not govern, K-12 public education and the community college system. The Chatham County School System is governed by its own elected board. There are three public high schools: Northwood in Pittsboro, Jordan-Matthews in Siler City, and Chatham Central in Bear Creek.

Central Carolina Community College, which has two campuses in the county, is governed by its own appointed Board of Trustees.

Generally, county resources provide only part of the total funding for K-12 and community colleges, but the county devotes a considerable amount of its resources to public education. In FY 2007–08, more than 39% of the county's tax dollars went to education.

According to the N.C. Association of County Commissioners Annual Tax and Budget Survey for FY 2006–07, the county ranked 11th in the state in total spending per student and fifth in the percent of the current expense/general funds spent on schools per student. The county also was 14th in overall education resources per capita during FY 06-07.

Chatham County has managed to retain its rural character in part because it is not served by an Interstate Highway. However, Chatham County plays an important role in regional transportation due to its close proximity to the geographic center of North Carolina and to major cities such as Raleigh, Durham and Greensboro. Though driving is the dominant mode due to the county's rural nature, residents enjoy a number of transportation options.[31]

The county is served by both Norfolk Southern Railway and CSX Transportation. Norfolk Southern serves Siler City, Bonlee, Bear Creek, and Goldston as a part of a spur line that runs between Greensboro and Sanford. CSX serves the Moncure area on trackage that runs between Raleigh and Hamlet. Oddly enough Pittsboro was once served by the Seaboard System Railroad (the predecessor to CSX), but the tracks were taken up in the 1970s and were never to return.

In addition to those mentioned below, the communities of Pittsboro, Siler City, and Goldston operate parks and other recreation facilities. 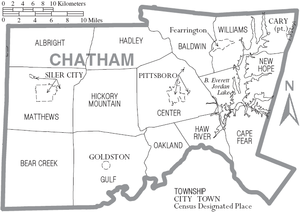