Lua error in Module:Coordinates at line 668: callParserFunction: function "#coordinates" was not found. Chatham University is an American university that has coeducational academic programs through the doctoral level, with its main campus located in the Shadyside neighborhood of Pittsburgh, Pennsylvania, United States. Chatham University maintains its Eastside Campus at the corner of Shadyside and the East Liberty neighborhood of Pittsburgh.[5] This campus serves the Health Sciences and Architecture programs. In 2013, Chatham opened its Eden Hall Campus to house the Falk School of Sustainability and is located in the Pittsburgh suburb of Pine.[6] The current university student population of 2,134 includes 512 undergraduate students enrolled in Chatham College for Women, 418 other undergraduate students, and 1,204 graduate students. [7] The University grants certificates and degrees including bachelor, master, first-professional, and doctorate in the School of Arts, Science, and Business, the School of Health Sciences, and the Falk School of Sustainability.

Founded as the Pennsylvania Female College on December 11, 1869, by Reverend William Trimble Beatty (the father of renowned operatic contralto Louise Homer), Chatham was initially situated in the Berry mansion on Woodland Road off Fifth Avenue in the neighborhood of Shadyside. The campus today is composed of buildings and grounds from a number of former private mansions, including those of Andrew Mellon, Edward Stanton Fickes, George M. Laughlin Jr. and James Rea. It was renamed Pennsylvania College for Women in 1890, and as Chatham College in 1955. The name served to honor William Pitt, 1st Earl of Chatham and namesake of the City of Pittsburgh.[8] The school gained university status from the Pennsylvania Department of Education on April 23, 2007, and publicly announced its new status on 2007-05-01, changing its name to Chatham University.[9]

With elements designed for the original Andrew Mellon estate by the Olmsted Brothers, the 39-acre (16 ha) Chatham campus was designated an arboretum in 1998 by the American Association of Botanical Gardens and Arboreta. It features over 115 different varieties of species, including Japanese Flowering Crabapple, River Birch and Kentucky Coffee Tree.

In 2005 the University expanded its programs to include online advanced degree programs (bachelors, masters, doctoral) through the School of Continuing Education, now the College for Continuing and Professional Studies. Two years later, Chatham's M.F.A. Program in Creative Writing was named one of the top five Innovative/Unique Programs by The Atlantic Monthly.[10]

Chatham received some national attention in 2014 when it announced that it was engaging in a period of study "considering admitting men for the first time in that college's history,"[11] resulting in "reactions of surprise and anger" from its alumnae.[12]

The original Shadyside Campus is part of historic Woodland Road. The Shadyside Campus now includes Chatham Eastside,[13] which serves as the home for health science and architecture programs.

The University’s new 388-acre (157 ha) Eden Hall Campus is located north of the city in Richland Township, Pa. and will be the home of Chatham’s new Falk School of Sustainability. Programs at Eden Hall Campus include initiatives in sustainability and environmental studies, food studies, landscape architecture, and women’s studies. The Eden Hall Campus was donated to Chatham University by the Eden Hall Foundation on May 1, 2008. Currently[when?] the architectural team of Berkebile Nelson Immenschuh McDowell (BNIM) of Kansas City, Mo., which is partnering with landscape design firm Andropogon Associates of Philadelphia to lead the master planning process.[citation needed] 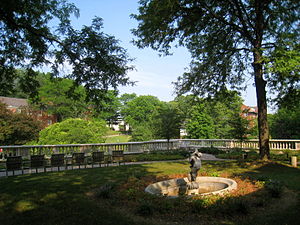 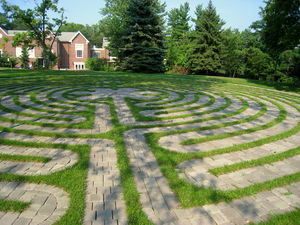 The University structure includes three distinctive Colleges: Chatham College for Women houses academic and co-curricular programs for undergraduate women and embodies the traditions and rituals of the traditional women's college. The College for Graduate Studies offers women and men both masters and doctoral programs. Programs within the College for Graduate Studies include concentrations in art and architecture, business, health sciences, teaching and creative writing. The College for Continuing and Professional Studies, formerly the School of Continuing Education, provides online and hybrid undergraduate and graduate degree programs for women and men, certificate programs, and community programming including the Summer Music and Arts Day Camp.[citation needed]

In fall 2010 the University selected David M. Hassenzahl, Ph.D. as the founding Dean of the School of Sustainability and the Environment. Dr. Hassenzahl is the coauthor of several books, including Should We Risk It? (Princeton University Press) with Daniel M. Kammen; Environment (J. Wiley and Sons), with Peter Raven and Linda Berg, and, most recently, Visualizing Environmental Science (J. Wiley and Sons), with Linda Berg and Mary Catherine Hager.[citation needed]

Chatham University is accredited by the Middle States Commission on Higher Education.[citation needed]

The college mascot was previously Pennsy the Seal. The cougar mascot was adopted in 1992 and was named Carson in honor of alumna Rachel Carson in 2011.[4]

Among Chatham's notable alumnae is biologist and zoologist Rachel Carson (1929), after whom the Rachel Carson Institute at Chatham is named. The RCI, as it is known, promotes understanding of environmental issues through conferences, lectures, discussion panels, and other methods. In honor of Rachel Carson's legacy, the University President, Esther L. Barazzone, Ph.D. and others led a campaign to rename the Ninth Street Bridge in Downtown Pittsburgh as the Rachel Carson Bridge. The naming resolution was passed by Allegheny County Council on December 6, 2005. The Rachel Carson Bridge is one of the "Three Sisters" Bridges, opened between 1926 and 1928, and designed by County architect Stanley L. Roush and the Allegheny County Department of Public Works. The Roberto Clemente Bridge (formerly Sixth Street Bridge) and the Andy Warhol Bridge (formerly Seventh Street Bridge) complete the trio of bridges. They are the only trio of nearly identical bridges and were the first self-anchored suspension spans built in the United States. They are among the only surviving examples of large eyebar-chain suspension bridges in the country.

Other notable alumnae include: