From Infogalactic: the planetary knowledge core
Jump to: navigation, search
This article is about the adult-education movement. For other uses of "Chautauqua", see Chautauqua (disambiguation). 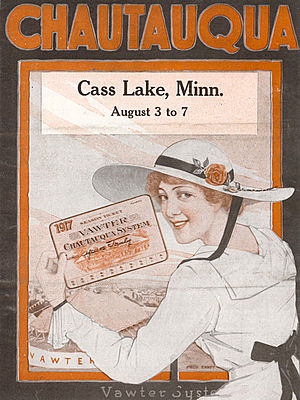 Cover of a 1917 promotional brochure

Chautauqua (/ʃəˈtɔːkwə/ shə-TAW-kwə) describes an adult education movement in the United States, highly popular in the late nineteenth and early twentieth centuries. Named after Chautauqua Lake, in Western New York where the first was held, Chautauqua assemblies expanded and spread throughout rural America until the mid-1920s. A Chautauqua Assembly brought entertainment and culture for the whole community, with speakers, teachers, musicians, entertainers, preachers and specialists of the day.[1] Former US President Theodore Roosevelt was quoted as saying that Chautauqua is "the most American thing in America".[2] 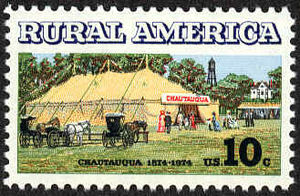 Postage stamp commemorating the 100th anniversary of the first Chautauqua

The first Chautauqua, the New York Chautauqua Assembly, was organized in 1874 by Methodist minister John Heyl Vincent and businessman Lewis Miller at a campsite on the shores of Chautauqua Lake in New York State. Two years earlier, Vincent, editor of the Sunday School Journal, had begun to train Sunday school teachers in an outdoor summer school format. The gatherings grew in popularity. The organization founded by Vincent and Miller later became known as the Chautauqua Institution. It was called the Mother Chautauqua, because many independent, or "daughter" Chautauquas were developed under the same fashion.[3]

The educational summer camp format proved to be a popular choice for families and was widely copied by the "daughter" Chautauquas. Within a decade Chautauqua assemblies (or simply Chautauquas), named for the original location in New York State, sprang up in various locations across North America. The Chautauqua movement may be regarded as a successor to the Lyceum movement earlier in the nineteenth century. As the Chautauqua assemblies began to compete for the best performers and lecturers, lyceum bureaus assisted with bookings. The original site in Chautauqua, New York, near Jamestown, has hosted such diverse speakers and performers as Bill Monroe and the Bluegrass Boys.

Today it is much larger than a camp site. There is a main gate leading to paved streets that are named after religious and secular dignitaries; a summer school program focused on the arts with some classes available for university credit; a fire hall and movie theater; a world-renowned amphitheater; and familiar summer amenities like ice cream pavilions, tourist shops, craft fairs and beaches. There is a nine-week program featuring many classes of study, the CLSC (Chautauqua Literary and Scientific Circle)- the oldest book club in the country, the Chautauqua Symphony Orchestra, an opera company, and a theater company. The amphitheater features a daily 10:45 AM lecture by well known governmental officials, literary people and well known international figures. It is also the venue for symphony orchestra concerts, and special events.<Chautauqua Institution Program>

Independent Chautauquas (or "daughter Chautauquas") operated at permanent facilities, usually fashioned after the Chautauqua Institute in New York. Such a Chautauqua was generally built in an attractive semi-rural location a short distance outside an established town with good rail service. At the height of the Chautauqua movement in the 1920s, several hundred of these existed, but their numbers have since dwindled.

At least three Independent Chautauquas have operated continuously from the 1920s into the 21st century, including the Lakeside Chautauqua; if Chautauqua is construed to include camp meetings and Sunday School Assemblies, the number is higher. See 21st century Chautauquas. 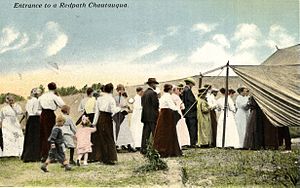 "Circuit Chautauquas" (or colloquially, Tent Chautauquas) were an itinerant manifestation of the Chautauqua movement. The program would be presented in tents pitched "on a well-drained field near town." After several days, the Chautauqua would fold its tents and move on. The method of organizing a series of touring Chautauquas is attributed to Keith Vawter, a Redpath Lyceum Bureau manager.[4] Among early Redpath comedians was Boob Brasfield.

Circuit Chautauqua began in 1904. In Vawter's schema, each performer, or group, appeared on a particular day of the program. Thus "first day" talent would move on to other Chautauquas, followed by the "second day" performers, and so on, throughout the touring season. By the mid-1920s, when circuit Chautauquas were at their peak, they appeared in more than 10,000 communities to audiences of more than 45 million; by about 1940 they had run their course.

Lectures were the mainstay of the chautauqua. Prior to 1917, lectures dominated the circuit Chautauqua programs. The reform speech and the inspirational talk were the two main types of lecture until 1913.[5] Later topics included current events, travel and stories, often with a comedic twist.

The most popular speaker
William Jennings Bryan, with his populist and evangelical message addressing topics such as temperance, was the most popular Chautauqua speaker, until his death in 1925.

The most famous speech
The most prolific speaker (often booked in the same venues with Bryan) was Russell Conwell who delivered his famous "Acres of Diamonds" speech 5,000 times to audiences on the Chautauqua and Lyceum circuits.[5] The theme was "get rich young man, for money is power and power ought to be in the hands of good people. I say you have no right to be poor."[6]

Other speakers
Maud Ballington Booth, the "Little Mother of the Prisons", was another popular performer on the circuit. Booth's descriptions of prison life would move her audiences to tears and rouse them to reform. On a lighter note, author Opie Read's stories and homespun philosophy endeared him to audiences. Other well-known speakers and lecturers in Chautauqua events of various forms included Member of the U.S. House of Representatives Champ Clark from Missouri, Missouri Governor Herbert S. Hadley, and "Fighting Bob" La Follette (governor of Wisconsin at the time).[5]

Christian instruction, preaching and worship were a strong part of the Chautauqua experience. Although the Chautauqua movement was founded by Methodists, nondenominationalism was a Chautauqua principle from the beginning, and prominent Catholics like Catherine Doherty took part. In 1892, Lutheran Church theologian Theodore Emanuel Schmauk was one of the organizers of the Pennsylvania Chautauqua.

Early religious expression in Chautauqua was usually of a general nature, comparable to the later Moral Re-Armament movement. Later on, in the first half of the twentieth century, Fundamentalism was the content of an increasing number of Chautauqua sermons and lectures. However, the great number of Chautauquas, as well as the absence of any central authority over them, meant that religious patterns varied greatly among the different Chautauquas. Some were so religiously oriented that they were essentially church camps, while more secular Chautauquas resembled summer school and competed with vaudeville in theaters and circus tent shows with their animal acts and trapeze acrobats. People involved in the Chautauqua movement believed that secular and spiritual knowledge both radiate from God and are equally important.

In 2006[update], one extreme can be observed in the Lakeside Chautauqua, privately owned but affiliated with the United Methodist church, while the opposite extreme is represented by the Colorado Chautauqua, which is entirely nondenominational and mostly secular in its orientation.

Music was important to Chautauqua. Band music was much in demand. John Philip Sousa protégé Bohumir Kryl's Bohemian Band was frequently seen on the circuit. One of the numbers featured by Kryl was the "Anvil Chorus" from Il trovatore with four husky timpanists in leather aprons hammering on anvils shooting sparks (enhanced through special effects) across the darkened stage. Spirituals were also popular. White audiences appreciated seeing African-Americans performing other than minstrelsy. Other musical features of the Chautauqua included groups like the Jubilee Singers singing a mix of spirituals and popular tunes, and other singers and instrumental groups playing popular music, ballads and songs from the "old country". Entertainers on the Chautauqua circuit such as Charles Ross Taggart, billed as The Man From Vermont and The Old Country Fiddler, played violin, sang, was a ventriloquist and comedian, and told tall tales about life in rural New England.

Opera became a part of the Chautauqua experience in 1926 when the American Opera Company, an outgrowth of the Eastman School of Music in Rochester, New York, began touring the country. Under the direction of Russian tenor Vladimir Rosing, the AOC presented five operas in one week at the Chautauqua Amphitheater.[7] By 1929 a permanent Chautauqua Opera company had been established. 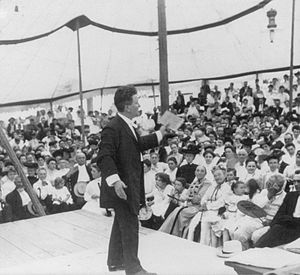 Chautauquas can be viewed in the context of the populist ferment of the late nineteenth century. Manifestos such as the "Populist Party Platform"[8] voiced a disdain for political corruption and championed the plight of the common people in the face of the rich and powerful. Other favorite political reform topics in Chautauqua lectures included temperance (even prohibition), women's suffrage, and child labor laws.

However, the Chautauqua movement usually avoided taking political stands as such, instead inviting public officials of all the major political parties to lecture, assuring a balanced program for the members of the assembly. For example, during the 1936 season at the Chautauqua Institution, in anticipation of the national election held that year for president, visitors heard not only addresses by Franklin Roosevelt and his Republican challenger Alf Landon, but from two third-party candidates.

Rise and decline of the Chautauqua movement

The popularity of the Chautauqua movement can be attributed in part to the social and geographic isolation of American farming and ranching communities. People in such areas would naturally be hungry for education, culture, and entertainment, and the Chautauqua movement was a timely response to that need in the late nineteenth century and early twentieth century. By the turn of the century, however, other entertainment and educational opportunities, such as radio and movies, began to arrive in American towns to compete with Chautauqua lectures. With the advent of the automobile after 1910, and the radio after 1920, middle class Americans could now listen to or attend cultural events previously available only in urban areas and the Chautauqua movement lost popularity.[9]

A typical circuit of performances

The following is an example of a route taken by a troupe of Chautauqua entertainers. The troupe, the May Valentine Opera Company, performed Gilbert and Sullivan's The Mikado during their 1925 "Summer Season" which began March 26 in Abbeville, Louisiana and ended on September 6 in Sidney, Montana.[10] 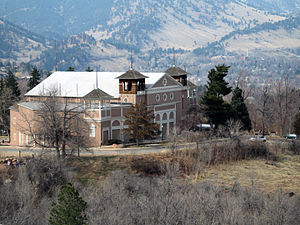 Several buildings remain from the movement.

Isabella Macdonald Alden, an American author writing under the pseudonym of Pansy, wrote a series of six novels between 1876 and 1913 inspired by the Chautauqua movement.

H.L. Mencken used the word "chautauqua" (lower case) to refer more generally to a herd of clumsy writers: "When they essay to be jocose, the result is usually simply an elephantine whimsicality, by the chautauqua out of the Atlantic Monthly." [Vintage Mencken, p. 96, ed. Alistair Cooke, 1955]

In his philosophical novel Zen and the Art of Motorcycle Maintenance, philosopher Robert M. Pirsig uses the term "chautauqua" to refer to the philosophical dialogues that he engages in with the reader while traveling across the American Midwest and Pacific Northwest.

The 1969 Elvis Presley movie, The Trouble with Girls, illustrates the Circuit Chautauqua. In Presley's thirtieth movie, he plays a manager of the educational programs presented in the shows and sings when a scheduled lecturer fails to appear.[11][12]

Since 1984, Wytheville, Virginia, has hosted their annual summer arts, crafts, and entertainment events under the name "Chautauqua Festival."[13]