Cheshire East is a unitary authority area with borough status in the ceremonial county of Cheshire, England. The local authority is Cheshire East Council.

The borough council was established in April 2009 as part of the 2009 structural changes to local government in England, by virtue of an order under the Local Government and Public Involvement in Health Act 2007.[1] It is an amalgamation of the former boroughs of Macclesfield, Congleton and Crewe and Nantwich, and includes the functions of the former Cheshire County Council. The residual part of the disaggregated former County Council, together with the other three former Cheshire borough councils (Chester City, Ellesmere Port & Neston and Vale Royal) were, similarly, amalgamated to create the new unitary council of Cheshire West and Chester.

Cheshire East has historic links to textile mills of the industrial revolution, such as seen at Quarry Bank Mill. It is also home to Tatton Park, a historic estate that hosts RHS Show Tatton Park.

Cheshire East lies within North West England. It borders Cheshire West and Chester to the west, Greater Manchester to the north, Derbyshire to the east as well as Staffordshire and Shropshire to the south. It is home to the Cheshire Plain and the southern hills of the Pennines. The local geology is mostly glacial clay, as well as glacial sands and gravel.

A breakdown of religious groups and denominations:

Members of the European Parliament 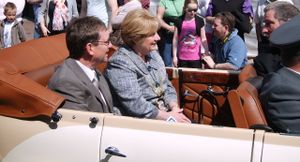 The first elections for Cheshire East Council took place on 1 May 2008, with the Conservative Party taking overall control. The Conservatives took 59 of the 81 seats with the others being held by the Liberal Democrats (12), Labour (6), 3 members of Middlewich First and one Independent.[7] The first leader of the authority was Wesley Fitzgerald who was elected at Cheshire East's inaugural meeting on Tuesday 13 May 2008. Wesley Fitzgerald is a Councillor for the Wilmslow South ward. Having decided in February 2012 to step down, a leadership contest was triggered. Michael Jones – a relatively new councillor having been elected in the May 2011 elections – was elected as the Leader of the Conservative Group on 17 March 2012.

A556 Knutsford to Bowdon Improvement: A new five-mile four-lane dual-carriageway bypass of Bucklow Hill and Mere Crossroads on the A556 is currently under construction by Highways England at a cost of between £165-£221 million. The new road will also contain the first 'green bridge' wildlife crossing in the United Kingdom. The existing road will be narrowed to one lane in each direction and re-designated as the B5569 under the maintenance of Cheshire East Council.[10][11]

M6 Junctions 16-19: Smart Motorway: Highways England are preparing to convert the hard shoulder to a permanent running lane and introduce a variable speed limit along this section of the M6, meaning that it will become the first smart motorway in Cheshire. The scheme is expected to cost between £192-£274 million.[12]

The area is home to a large number of sites of public interest:

The former borough of Macclesfield was twinned with