From Infogalactic: the planetary knowledge core
Jump to: navigation, search
File:Chesil Cove.JPG
Chesil Cove at Chiswell with Chesil Beach stretching off into the distance. 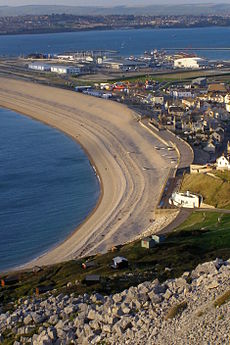 Chesil Cove is a cove situated at the most southerly part of the 29-kilometre (18 mi) long Chesil Beach in Dorset, England. Chesil Beach itself is one of three major shingle structures in Britain, extending from West Bay to Portland, the latter acting as a large groyne holding the beach in place. It also provides shelter from the prevailing winds and waves for the town of Weymouth and the village of Chiswell.

Chesil Beach, and the cove, have seen many cases of shipwrecks, more so than most other parts of the British coast, particularly during the age of sail.[1][2] Chesil Beach became infamously known as "Deadman's Bay", taken after the name Thomas Hardy gave West Bay, including Chesil Cove, in his novel The Well Beloved of 1892.[3]

The local fishermen, particularly at Portland, developed a purpose-built vessel to withstand the sea actions at Chesil Beach. The boat, known as a Lerret, is a double-ended open fishing boat, used for seine net fishing.[4] The 18th-century public house The Cove House Inn remains one of Portland's most popular pubs and is Grade II Listed. Despite its particularly vulnerable position on the beach, the pub was a survivor during "The Great Gale of 1824".[5]

The adjoining village of Chiswell was established predominately as a fishing community. Despite its vulnerability to sea storms and flooding, Chiswell continued to develop into a thriving community.[9] One of the best-documented incidents of flooding occurred in November 1824, and became infamously known as "The Great Storm of 1824". The storm saw the death of thirty residents, the destruction of eighty houses, and the damage of many others.[10] The construction of a sea wall finally commenced in 1958, and work on this scheme continued until 1965. The wall extended from the far end of Chesil Cove, at West Weares, to the location of the village's Cove House Inn.[11] A promenade was laid-out on top of the wall, and this became a popular attraction.[12]

Despite the sea wall proving a worthy defence, incidents of widespread flooding were not a thing of the past. During December 1978 and February 1979, two major storms caused further devastation to Chiswell. The flooding led to further defence installations during the 1980s.[13] During January–February 2014, violent storms across the south-west of England caused more flooding in the village, which received a lot of national and international attention.[14]

Chesil Cove is a popular site for scuba divers. It has become one of the best known shore dives in the UK.[15] The cove is a reasonably shallow shore dive, and has an interesting selection of south coast marine life, as well as an abundance of flora and fauna.[16] Although there have been many shipwrecks in the cove, few significant divable remains exist close to the beach due to its exposure to strong waves.

Through fishing, the beach provided the main occupation for the villagers of Chiswell and the rest of the islanders. The beach is still used by sea anglers and the British record for shore-captured shore rockling was set there in 1992.[17] Recreational fishing is a popular pastime at the cove.[18]

The Jurassic Coast stretches over a distance of 155 kilometres (96 mi), from Orcombe Point near Exmouth, in the west, to Old Harry Rocks on the Isle of Purbeck, in the east.[19] The coastal exposures along the coastline provide a continuous sequence of Triassic, Jurassic and Cretaceous rock formations spanning approximately 185 million years of the Earth's history. The localities along the Jurassic Coast includes a large range of important fossil zones.