The first scheduled flights to Chișinău started on 24 June 1926, on the route Bucharest – Galați – Chișinău and Iași. The flights were operated by Compagnie Franco-Roumaine de Navigation Aérienne – CFRNA, later LARES.[5] A commemorative plaque, describing the first flight to Chișinău, was placed in the airport.

Development since the 1990s

On 31 May 1995 Chișinău Airport was awarded the status of an international airport.

There are plans to enlarge the airport.[7] The project involves EUR 19 million loan to Chișinău International Airport for the rehabilitation and upgrade of the existing runway, taxiways, aprons, and ramps, engineering works, safety equipment and other connected core assets of Chișinău International Airport. The European Investment Bank ('EIB') is considering co-financing alongside EBRD for up to an equal amount.[8]

There are ten check-in desks and five gates at the airport.[9] VIP and CIP guests are offered special services at the VIP terminal. A visitors' terrace in the second floor opened in December 2006.

Previously passengers had to present their passport, ticket and their registration (of foreigners – which used to be required). Passengers were allowed in the check in hall. With the introduction of e-tickets and the abolition of the registration for foreigners the airport reorganized in late 2006. This resulted in a bigger check-in hall and customs control is now after check-in. 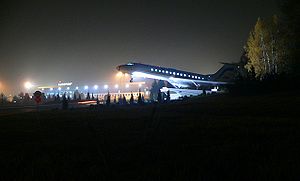 There are bus lines and rutieră vans frequently departing from the airport (aerogara). Rutieră line 165 passes through the Botanica district and continues to the city center. The 'AEROGARA' bus departs from Piața D. Cantemir and has intermediate stops in the city center on Stefan Cel Mare street. It also stops at the central railway station 'GARA' bus station. There is a white livery bus operating in a 30-minute interval This is different from rutieră vans, which may stop at any time, given the driver is notified a few seconds prior.