The Chicago Daily News was an afternoon daily newspaper published between 1876 and 1978 in Chicago, Illinois, United States.

The Daily News was founded by Melville E. Stone, Percy Meggy, and William Dougherty in 1875 and began publishing early the next year. It strove for mass readership in contrast with its primary competitor, the Chicago Tribune, which was more influential among the city's elites; for many years, the Daily News boasted a 1¢ newsstand price. Byron Andrews, fresh out of Hobart College, was one of the first reporters. Victor F. Lawson bought the Chicago Daily News in 1876 and became its business manager. Stone remained involved as an editor and later bought back an ownership stake, but Lawson took over full ownership again in 1888.[1]

During the longtime tenure of Victor F. Lawson, the Chicago Daily News pioneered certain areas of reporting, opening one of the first foreign bureaus among U.S. newspapers in 1898 and starting one of the first columns devoted to radio in 1922. Lawson introduced many innovations to the business including advancements in newspaper promotion, classified advertising, and syndication of news stories, serials, and comics.[2] 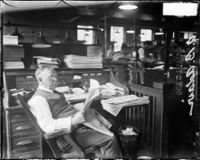 The Chicago Daily News became known for its distinctive, aggressive writing style which 1920s editor Henry Justin Smith likened to a daily novel. In its heyday from the 1930s to 1950s it was widely syndicated and boasted a first-class foreign news service.[3]

In 1922, the rival Chicago Tribune began to experiment with radio news at Westinghouse-owned KYW-AM. The Daily News entered into a partnership with The Fair Department Store to launch WGU-AM,[4] which would later be renamed WMAQ-AM. The newspaper would eventually take full ownership of the station and absorb shared band rival WQJ-AM, which was jointly owned by the Calumet Baking Powder Company and the Rainbo Gardens ballroom.[5][6][7] WMAQ would pioneer many firsts in radio—one of them the first complete Chicago Cubs season broadcast on radio in 1925, hosted by sportswriter-turned-sportscaster Hal Totten.[8]

In 1930, the station obtained a license for an experimental television station, W9XAP, but had already begun transmitting from it just prior to its being granted.[9][10] Working with Sears Roebuck stores by providing them with the receivers, those present at the stores were able to see Bill Hay, (the announcer for Amos 'n' Andy), present a variety show from the Daily News building, on August 27, 1930.[11][12] Ulises Armand Sanabria was the television pioneer behind this and other early Chicago television experiments. The Chicago Tribune, not to be left out of radio, purchased WDAP and WJAZ to form WGN-AM.[13] In 1931 The Daily News sold WMAQ to NBC.[14]

In 1929, it moved into a new 26-floor headquarters building at 400 West Madison Street. Designed by architects Holabird & Root, the Art Deco structure became a Chicago landmark, and stands today under the name Riverside Plaza. It featured a mural by John W. Norton depicting the newspaper production process.[15] 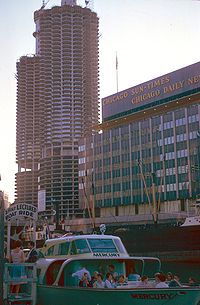 After a long period of ownership by Knight Newspapers (later Knight Ridder), the paper was acquired in 1959 by Field Enterprises, owned by heirs of the former owner of the Marshall Field and Company department store chain. Field already owned the morning Chicago Sun-Times, and the Daily News moved into the Sun-Times' building on North Wabash Avenue. A few years later Mike Royko became the paper's lead columnist, and quickly rose to local and national prominence. However, the Field years were mostly a period of decline for the newspaper, partly due to management decisions but also due to demographic changes; the circulation of afternoon dailies generally declined with the rise of television, and downtown newspapers suffered as readers moved to the suburbs.

In 1977 the Daily News was redesigned and added features intended to increase its appeal to younger readers, but the changes did not reverse the paper's continuing decline in circulation. The Chicago Daily News published its last edition on Saturday, March 4, 1978. There was a subsequent attempt to make it as an afternoon daily, by a Rosemont-based company called CDN Publishing Co., Inc. The paper went back into publication with a weekend edition dated August 4–5, 1979. The publisher of the revival was former Illinois governor Richard B. Ogilvie. This final attempt to gain popularity was not successful and the paper finally went back out of publication a few months later.

The headquarters of the Daily News and sister newspaper the Sun-Times was located at 401 North Wabash before the building was demolished. It is now the site of Trump International Hotel and Tower.