Chicago Public Schools (CPS), officially classified as City of Chicago School District #299 for funding and districting reasons,[6] in Chicago, Illinois, is the fourth largest school district in the U.S. (list of the largest school districts in the United States by enrollment).[3] For the 2014–2015 school year, CPS reported overseeing 660 schools, including 484 elementary schools and 176 high schools; of which 517 were district-run, 130 were charter schools, 11 were contract schools and 2 were SAFE schools.[3] The district serves over 396,000 students.[3]

Students attend a particular school based on their area of residence, except for charter schools and selective enrollment schools. The school system reported a graduation rate of 65.4 percent for the 2012–2013 school year.[7] Unlike most school systems, CPS calls the position of superintendent "Chief Executive Officer", but there is no material difference in responsibilities or reporting from what is traditionally a superintendent. CPS reported an average of 20 pupils per teacher in elementary schools and 24.6 pupils per teacher in high school.

As Chicago was started as a trading outpost in the early 1800s, it took several years for a citywide school system with adequate funding and instructional personnel to emerge. As early as 1848, during the first term of the 10th Mayor of Chicago, James Hutchinson Woodworth, the city's need for a public school system was recognized by the city council. A higher educational standard for the system was stated by the mayor, both to reflect his philosophy as a former teacher, and to add an attribute to Chicago that would continue to attract productive citizens.[8] In 1922, the school board voted unanimously to change policy that allocated library access based on color, "[extending] the same privileges to Race children to enter all the libraries as the white children enjoy", but maintaining segregated schools and specifying that "in each branch library all employees should belong to the race which attended the particular school".[9]

From 2001 to 2008, CPS, under Arne Duncan's leadership, closed dozens of elementary and high schools due to classrooms being at low capacity or underperforming. Despite claims that the closures would help underperforming students, University of Chicago researchers found that most of the students who transferred as a result of the closures did not improve their performance. These closures were fueled by corporate principles of competition and supported by billionaires, philanthropists, policy advocates, and local, state, and federal elected officials.[10] This is what led to the Renaissance 2010 initiative, which focused on closing public schools and opening more charter schools that were focused on one of the government structures: charter, performance, or contract.[11]

During this program's time, it has closed over 80 schools and plans to open 100 charter schools. This also include five military schools, three of which have Junior Reserve Officers' Training Corps programs.[12][13] In response to CPS's announcements in 2013 that it was considering closing nearly 200 schools,[14] many Chicago parents, students, teachers and community activists voiced their opposition through the media and at hearings around the city.[15][16][17][18][19]

In addition, several Illinois lawmakers, including chairman of the Senate education committee William Delgado (D-Chicago), pushed for a moratorium on school closings in CPS, citing "the disproportion[ate] effect on minority communities, the possibility of overcrowding and safety concerns for students who will have to travel further to class."[20] On May 22, 2013, the school board voted to close 50 public schools.[21] However, the majority of the closed schools have been in poor neighborhoods with a black population, such as Bronzeville.[22] These areas are not only sites of demolished public housing, but now to closed-down schools. For every four schools that have been closed, three have been in these neighborhoods. Over 88% of the students affected by these closings have been African American.[23]

In September 2012, CPS teachers went on a nine-day strike, walking off the job for the first time in 25 years. The work stoppage, which began during the second week of the 2012 school year, culminated with a march on City Hall.[29][30] Striking teachers voiced complaints about pay, teacher evaluations, and benefits, as well as general concerns about the neglect of the city's public school system.[31] Soon after the strike, CEO Jean-Claude Brizard stepped down from his position.

File:Chicago Public Schools HQ 1.jpg
CPS headquarters from 1998 until 2014 in the Chicago Loop 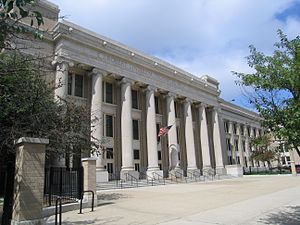 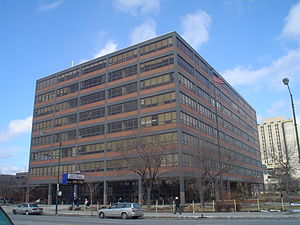 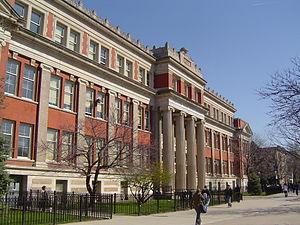 CPS is a vast system of primary, secondary, and disability schools confined to Chicago's city limits. This system is the second largest employer in Chicago.[34]

Most schools in the district, whether prekindergarten-8th grade, elementary, middle, or secondary, have attendance boundaries restricting student enrollment to within a given area. A school may elect to enroll students outside its attendance boundaries if there is space or if it has a magnet cluster program.

Full magnet schools are open to citywide student enrollment, provided that applicants meet a level of high academic standards. Magnets offer a variety of academic programs with various focuses, such as agriculture, fine arts, international baccalaureate, Montessori, math, literature, Paideia programs, and STEM (science, technology, engineering and math). STEM Magnet Academy is the first elementary school in the state of Illinois, and among the first in the nation, to offer a STEM-focused curriculum.[citation needed]

The Chicago High School for the Arts (ChiArts) is the system's only audition based performing and visual arts high school. Chicago was the largest city in the country without a public high school for the arts until the establishment of ChiArts in 2009.

The school system contains two levels of elementary-middle school programs which make selective admission only. Regional gifted centers have an area of focus (such as math and science) and require one type of assessment, akin to an IQ test. Classical schools, in contrast to regional gifted centers, take a liberal arts approach focusing on all areas. Classical school applications thus require a different type of assessment.

Competition is fierce, and many factors decide whether students are admitted or not:

In addition to the selective enrollment high schools, a number of other possibilities exist for high school students. These include military academies, career academies, and charter schools. Lincoln Park High School and Von Steuben Metropolitan Science Center are neighborhood "magnet" high schools, which also offer various honors programs to students citywide. More specialized options, such as the Chicago High School for the Arts and the Chicago High School for Agricultural Sciences are also available. 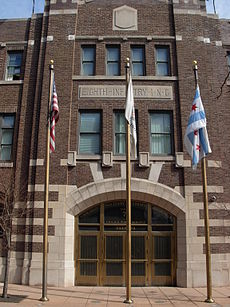 Chicago has a growing number of charter schools under the Noble Network of Charter Schools which receive the majority of their operating budgets from the same tax sources as CPS. Charters in Chicago receive 10-25% less public funding than traditional schools, although most studies show their student achievement and performance metrics to be the same as traditional CPS results.[38][39]
In October 2014, the University of Minnesota released a study that shows charter schools perform worse than traditional schools in producing students that meet or exceed standards in reading and math. The study also showed that charter schools have lower graduation rates and "are much less likely to be racially or ethnically diverse."[40]

The structure of Chicago Public Schools was redefined after Mayor Richard M. Daley convinced the Illinois General Assembly to place CPS under the mayor's control. Illinois school districts are generally governed by locally elected school boards, where each district board hires a superintendent, who in turn hires administrators such as principals, who then must be approved by the school board. In contrast, CPS is headed by a Chief Executive Officer and school board appointed by the mayor. CPS is headquartered in the 42 West Madison building in the Chicago Loop, formerly headquartered in the 125 South Clark Street building from 1998 until November 2014.[41]

The main offices of Chicago Public Schools are in the 42 W. Madison St. building in the Chicago Loop. The district has offices in Bridgeport, Colman, and Garfield Park.[42]

The main offices of Chicago Public Schools were previously located in the 125 South Clark Street building in the Chicago Loop.[43] The 20 story building, managed by MB Real Estate, and originally built as the Commercial National Bank,[44] has 570,910 square feet (53,039 m2) of space.[45]

The April 21, 2006 issue of the Chicago Tribune revealed a study by the Consortium on Chicago School Research that stated that 6 of every 100 CPS freshmen would earn a bachelor's degree by age 25. 3 in 100 black or Latino men would earn a bachelor's degree by age 25. The study tracked Chicago high school students who graduated in 1998 and 1999. 35% of CPS students who went to college earned their bachelor's degree within six years, below the national average of 64%.[46] Chicago has a history of high dropout rates, with around half of students failing to graduate for the past 30 years. Criticism is directed at the CPS for inflating its performance figures. Through such techniques as counting students who swap schools before dropping out as transfers but not dropouts, it publishes graduation claims as high as 71%. Nonetheless, throughout the 1990s actual rates seem to have improved slightly, as true graduation estimates rose from 48% in 1991 to 54% in 2004.[47]

In 1987, Education Secretary William J. Bennett called the Chicago Public Schools system the worst in the nation.[48] In September 2011, the University of Chicago's Consortium on Chicago School Research published a report on the school system's performance over the course of 30 years of reform.[49] While the report evaluated three decades of reform, it measured the progress of such policies by "analyzing trends in elementary and high school test scores and graduation rates over the past 20 years." The authors of the report highlighted five of their central conclusions: