The Chicago Whales were a professional baseball team based in Chicago. They played in the Federal League, a short-lived "third Major League", in 1914 and 1915. They originally lacked a formal nickname, and were known simply as the "Chicago Federals" (or "Chi-Feds") to distinguish them from the Chicago Cubs and Chicago White Sox.

The team was founded by Charles Weeghman. They came in second in the Federal League rankings in 1914 and won the league championship in 1915. They came to an end when the Federal League came to a deal with the National and American Leagues that disbanded all its teams. The Whales are notable as the original occupants of the stadium now known as Wrigley Field, the current home of the Chicago Cubs and the only Federal League stadium still in use.

Founded by Charles Weeghman, the club finished 1½ games behind the Indianapolis Hoosiers in the inaugural season for the league, during which the team lacked a formal nickname and was known simply as the Chicago Federals . Prior to the start of the season, Weeghman built a stadium for the team, called Weeghman Park, designed by Zachary Taylor Davis, who had previously designed Comiskey Park. He also leased the parcel on which the park stood for 99 years. 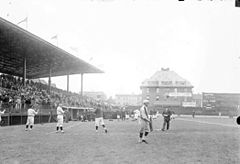 In the league's second and final season, the Chicago Federals adopted the nickname Whales, and included the logo of a whale inside a large "C" on their uniform shirts. The Whales won the league championship, finishing with 86 wins and 66 losses, percentage points ahead of the St. Louis Terriers' 87–67 record.

When Kenesaw Mountain Landis brokered a deal between the Federal League, American League and National League that ended the Federal League's existence, Weeghman was allowed to buy controlling interest in the Cubs. He then merged the Whales with the Cubs and moved the Cubs from West Side Park into his new steel-and-concrete structure. While Weeghman himself was forced out within four years due to financial troubles, the Cubs still play in the park he built to this day, the only Federal League park still in use. It was renamed Cubs Park in 1920 and acquired its present name, Wrigley Field, in 1926.