Chicken Shack are a British blues band, founded in the mid-1960s by Stan Webb (guitar and vocals), Andy Silvester (bass guitar), and Alan Morley (drums), who were later joined by Christine Perfect (McVie) (vocals and keyboards) in 1968. Chicken Shack has performed with various line-ups, Stan Webb being the only constant member.

David 'Rowdy' Yeats and Andy Silvester had formed Sounds of Blue in 1964 as a Stourbridge-based rhythm and blues band. They invited Stan Webb, who was leaving local band The Shades 5, to join them. The band also included Christine Perfect and Chris Wood (later to join Traffic) amongst others in their line up.[1] With a new line-up Chicken Shack was formed as a trio in 1965,[2] naming themselves after Jimmy Smith's Back at the Chicken Shack album. 'Chicken shacks' (open-air roadside chicken stands) had also been frequently mentioned in blues and R&B songs, as in Amos Milburn's hit, "Chicken Shack Boogie". Over the next few years the band had a residency at the Star-Club,[1] Hamburg with Morley, then Al Sykes, Hughie Flint (who was John Mayall's drummer when Eric Clapton was in the band) and later Dave Bidwell on drums.

They made their first UK appearance at the 1967 National Jazz and Blues Festival, Windsor and signed to Mike Vernon's Blue Horizon record label in the same year;[1] releasing Forty Blue Fingers, Freshly Packed and Ready to Serve in early 1968. A mainstay of the British blues boom, and a regular at UK festivals (Stan Webb's wandering through the crowd with a 200ft extension to his guitar lead during the band's set was a regular occurrence[citation needed]), Chicken Shack enjoyed some commercial success, with Christine Perfect voted Best Female Vocalist in the Melody Maker polls two years running. They had two minor hits with "I'd Rather Go Blind" and "Tears in the Wind",[1] after which Perfect left the band in 1969 when she married John McVie of Fleetwood Mac. She was replaced by Paul Raymond from Plastic Penny.[1]

After being dropped by Blue Horizon, pianist Paul Raymond, bassist Andy Silvester, and drummer Dave Bidwell all left in 1971 to join Savoy Brown.[1] At this point Webb reformed the band as a trio with John Glascock on bass and Paul Hancox on drums, and they recorded Imagination Lady.[1] The line-up did not last; Glascock left to join Carmen, while Webb was recruited for Savoy Brown in 1974 and recorded the album Boogie Brothers with them.[1]

Since 1977 Webb has revived the Chicken Shack name on a number of occasions, with a rotating membership of British blues musicians including, at various times, Paul Butler (ex-Jellybread, Keef Hartley Band)(guitar), Keef Hartley, ex-Ten Years After drummer Ric Lee and Miller Anderson, some of whom came and went several times. The band has remained popular as a live attraction in Europe throughout. 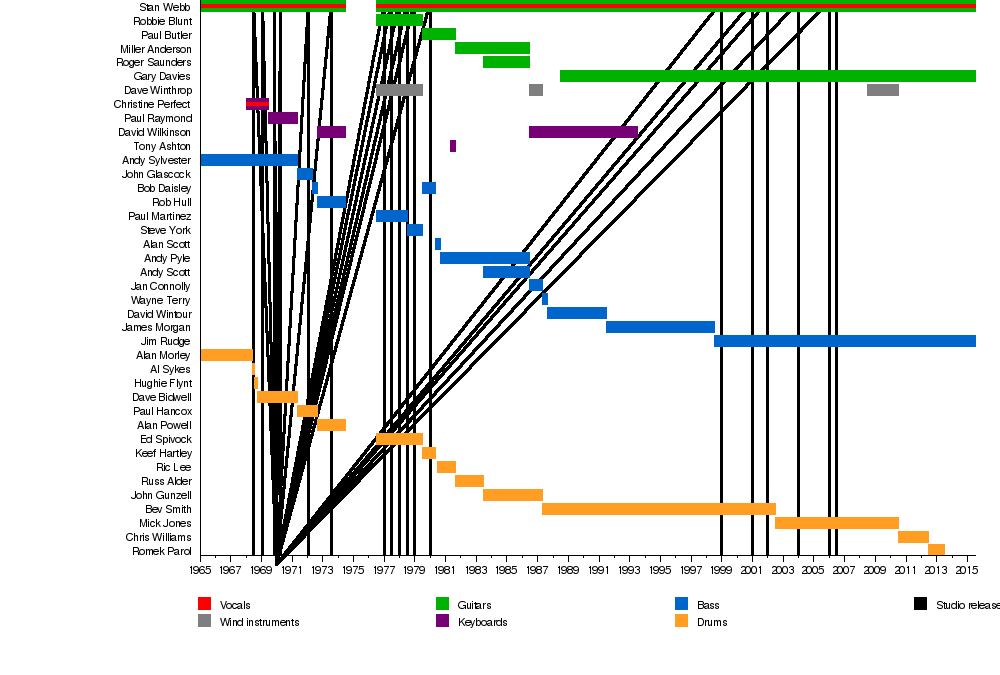