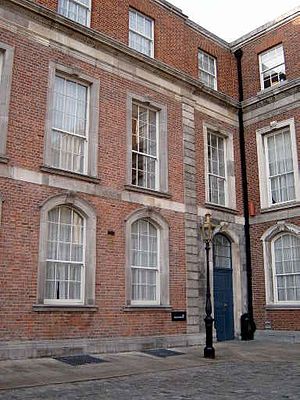 British rule over much of Ireland came to an end as the result of the Irish War of Independence, which culminated in the establishment of the Irish Free State. In consequence the office of Chief Secretary was abolished, as well as that of Lord Lieutenant. Executive responsibility within the Irish Free State and Northern Ireland was effectively transferred to the President of the Executive Council (i.e. the prime minister) and the Prime Minister of Northern Ireland respectively.

The dominant position of the Lord Lieutenant at Dublin Castle had been central to the British administration of the Kingdom of Ireland for much of its history. Poynings' Law in particular meant that the Parliament of Ireland lacked an independent power of legislation, and the Crown kept control of executive authority in the hands of the Lord Lieutenant and its own appointees, rather than in the hands of ministers responsible to the Irish parliament.

In 1560 Queen Elizabeth I of England and Ireland ordered the Lord Lieutenant, the Earl of Sussex, to appoint John Challoner of Dublin as Secretary of State for Ireland "because at this present there is none appointed to be Clerk of our Council there, and considering how more meet it were, that in our realm there were for our honour one to be our Secretary there for the affairs of our Realm".[3] The appointment of a Secretary was intended to both improve Irish administration, and to keep the Lord Lieutenant in line.[citation needed] The role of Secretary of State for Ireland and Chief Secretary of Ireland were originally distinct positions, Thomas Pelham being the first individual appointed to both offices concurrently in 1796.[4]

Over time, the post of Chief Secretary gradually increased in importance, particularly because of his role as manager of legislative business for the Government in the Irish House of Commons, in which he sat as an MP. While the Irish administration was not responsible to the parliament, it nevertheless needed to manage and influence it in order to ensure the passage of key legislative measures.

In 1800 the Act of Union was passed by the Irish parliament, merging the kingdom into the new United Kingdom of Great Britain and Ireland with effect from 1 January 1801. The Chief Secretaryship[citation needed] was of particular importance in the run-up to the eventual enactment, on the second attempt, of the Act of Union, when Viscount Castlereagh held the post. The Chief Secretary's[citation needed] exercise of patronage and direct bribery were central to delivering a parliamentary majority for the Union.

Upon the Union the Irish parliament ceased to exist. However, the existing system of administration in Ireland continued broadly in place, with the offices of Lord Lieutenant and Chief Secretary retaining their respective roles.