The Chief of Naval Operations (CNO) is a statutory office (10 U.S.C. § 5033) held by a four-star admiral in the United States Navy, and is the most senior naval officer assigned to serve in the Department of the Navy. The office is a military adviser and deputy to the Secretary of the Navy. In a separate capacity as a member of the Joint Chiefs of Staff (10 U.S.C. § 151) the CNO is a military adviser to the National Security Council, the Homeland Security Council, the Secretary of Defense, and the President. The current Chief of Naval Operations is Admiral John M. Richardson.

The Chief of Naval Operations is an administrative position based in the Pentagon, and while the CNO does not have operational command authority over Naval forces as the title implies (that is nowadays within the purview of the Combatant Commanders who report to the Secretary of Defense), the CNO does exercise supervision of Navy organizations as the designee of the Secretary of the Navy.

Department of the Navy

The CNO reports directly to the Secretary of the Navy for the command, utilization of resources, and operating efficiency of the operating forces of the Navy and of the Navy shore activities assigned by the Secretary.[1] Under the authority of the Secretary of the Navy, the CNO also designates naval personnel and naval resources to the commanders of Unified Combatant Commands.[2][3] The CNO also performs all other functions prescribed under 10 U.S.C. § 5033 and those assigned by the secretary[2] or delegates those duties and responsibilities to other officers in his administration. The CNO is typically the highest-ranking officer on active duty in the Navy unless the Chairman and/or the Vice Chairman of the Joint Chiefs of Staff are naval officers. Like the other joint chiefs, the CNO is an administrative position and has no operational command authority over United States naval forces.[1]

Office of the Chief of Naval Operations

Policy documents are issued in the form of OPNAV Instructions.

The Chief of Naval Operations is nominated by the President for appointment and must be confirmed by the Senate.[5] A requirement for being Chief of Naval Operations is having significant experience in joint duty assignments, which includes at least one full tour of duty in a joint duty assignment as a flag officer.[5] However, the president may waive those requirements if he determines that appointing the officer is necessary for the national interest.[5] By statute, the CNO is appointed as a four-star admiral.[5]

Number One Observatory Circle, located on the northeast grounds of the United States Naval Observatory in Washington, DC, was built in 1893 for its superintendent. The Chief of Naval Operations liked the house so much that in 1923 he took over the house as his own official residence. It remained the residence of the CNO until 1974, when Congress authorized its transformation to an official residence for the Vice President.[6] The Chief of Naval Operations currently resides in Quarters A in the Washington Naval Yard.

The position of CNO replaced the position of Aide for Naval Operations, which was a position established by regulation rather than statutory law.[7] 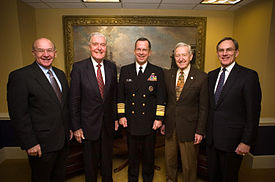 Mullen (CNO in December 2006) with some of his predecessors: Clark, Watkins, Hayward and Johnson