Biologically, a child (plural: children) is a human between the stages of birth and puberty.[1][2] The legal definition of child generally refers to a minor, otherwise known as a person younger than the age of majority.[1]

Child may also describe a relationship with a parent (such as sons and daughters of any age)[3] or, metaphorically, an authority figure, or signify group membership in a clan, tribe, or religion; it can also signify being strongly affected by a specific time, place, or circumstance, as in "a child of nature" or "a child of the Sixties".[4]

There are many social issues that affect children, such as childhood education, bullying, child poverty, dysfunctional families, child labor, and in developing countries, hunger. Children can be raised by parents, by fosterers, guardians or partially raised in a day care center. 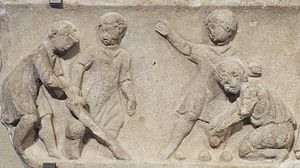 The United Nations Convention on the Rights of the Child defines child as "a human being below the age of 18 years unless under the law applicable to the child, majority is attained earlier".[5] This is ratified by 192 of 194 member countries. In U.S. Immigration Law, a child refers to anyone who is under the age of 21.[6]

Biologically, a child is generally anyone between birth and puberty.[1][2] Some English definitions of the word child include the fetus (sometimes termed the unborn).[7] In many cultures, a child is considered an adult after undergoing a rite of passage, which may or may not correspond to the time of puberty.

Children generally have fewer rights than adults and are classed as unable to make serious decisions, and legally must always be under the care of a responsible adult. Recognition of childhood as a state different from adulthood began to emerge in the 16th and 17th centuries. Society began to relate to the child not as a miniature adult but as a person of a lower level of maturity needing adult protection, love and nurturing. This change can be traced in paintings: In the Middle Ages, children were portrayed in art as miniature adults with no childlike characteristics. In the 16th century, images of children began to acquire a distinct childlike appearance. From the late 17th century onwards, children were shown playing with toys and later literature for children also began to develop at this time.[8]

Every child goes through many stages of social development. An infant or very young child will play alone happily. If another child wanders onto the scene, he or she may be physically attacked or pushed out of the way. Next, the child can play with another child, gradually learning to share and take turns. Eventually, the group grows larger, to three or four children. By the time a child enters kindergarten, he or she can usually join in and enjoy group experiences.[9]

Children with ADHD and learning disabilities may need extra help to develop social skills. The impulsive characteristics of an ADHD child may lead to poor peer relationships. Children with poor attention spans may not tune into social cues in their environment, making it difficult for them to learn social skills through experience.[9]

The age at which children are considered responsible for their society-bound actions (e. g. marriage, voting, etc.) has also changed over time, and this is reflected in the way they are treated in courts of law. In Roman times, children were regarded as not culpable for crimes, a position later adopted by the Church. In the 19th century, children younger than seven years old were believed incapable of crime. Children from the age of seven forward were considered responsible for their actions. Therefore, they could face criminal charges, be sent to adult prison, and be punished like adults by whipping, branding or hanging.[10] Today, in many countries like Canada and the United States, children twelve and older are held responsible for their actions. They may be sent to special correctional institutions, such as juvenile hall.

Surveys have found that at least 25 countries around the world have no specified age for compulsory education. Minimum employment age and marriage age also vary. In at least 125 countries, children aged 7–15 may be taken to court and risk imprisonment for criminal acts. The age limit of voluntary/involuntary military service is also disputed at the international level.[11] In some countries, children are legally obliged to go to school until they are 14 or 15 years old, but may also work before that age. A child's right to education is threatened by early marriage, child labour and imprisonment.[12] 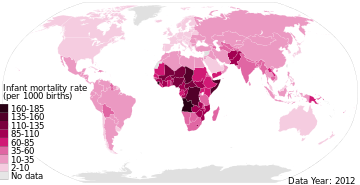 During the early 17th century in England, average life expectancy was only about 35 years, largely because two-thirds of all children died before the age of four.[14] During the Industrial Revolution, the life expectancy of children increased dramatically.[15]

According to population health experts, child mortality rates have fallen sharply since the 1990s. About 12.6 million under-five infants died annually worldwide in 1990, which has declined to 6.6 million infant deaths in 2012. The infant mortality rate has dropped from 90 deaths per 1,000 live births in 1990, to 48 in 2012. The highest average infant mortality rates are in Sub-Saharan Africa, at 98 deaths per 1,000 live births - over double the world's average of 48.[13]

Education, in the general sense, refers to the act or process of imparting or acquiring general knowledge, developing the powers of reasoning and judgment, and preparing intellectually for mature life.[16] Formal education most often takes place through schooling. A right to education has been recognized by some governments. At the global level, Article 13 of the United Nations' 1966 International Covenant on Economic, Social and Cultural Rights recognizes the right of everyone to an education.[17] Education is compulsory in most places up to a certain age, but attendance at school may not be, with alternative options such as home-schooling or e-learning being recognized as valid forms of education in certain jurisdictions.

Children in some countries (especially in parts of Africa and Asia) are often kept out of school, or attend only for short periods. Data from UNICEF indicate that in 2011, 57 million children were out of school; and more than 20% of African children have never attended primary school or have left without completing primary education.[18] According to a UN report, warfare is preventing 28 million children worldwide from receiving an education, due to the risk of sexual violence and attacks in schools.[19] Other factors that keep children out of school include poverty, child labor, social attitudes, and long distances to school.[20][21] 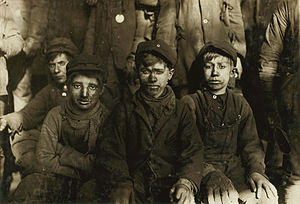 Social attitudes toward children differ around the world in various cultures. These attitudes have changed over time. A 1988 study on European attitudes toward the centrality of children found that Italy was more child-centric and the Netherlands less child-centric, with other countries, such as Austria, Great Britain, Ireland and West Germany falling in between.[22]

Child marriage was common in human history. Today child marriage rates reach 75% in Niger and 68% in Central African Republic and Chad, 66% in Bangladesh and 47% in India.[23]

Protection of children from abuse is considered an important contemporary goal. This includes protecting children from exploitation such as child labor, child trafficking and selling, child sexual abuse, including child prostitution and child pornography, military use of children, and child laundering in illegal adoptions. There exist several international instruments for these purposes, such as:

This audio file was created from a revision of the "Child" article dated 2008-06-24, and does not reflect subsequent edits to the article. (Audio help)
More spoken articles