From Infogalactic: the planetary knowledge core
Jump to: navigation, search
This article is about selling mainly for nonexploitative adoption. For selling for exploitation, see trafficking of children. For sale as part of ongoing slavery, see child slavery.
For the illegal acquisition of children by purchase or otherwise, see child laundering.
Not to be confused with child labor, marketing directed at children, or children selling products as a small activity (such as at a lemonade stand).

Child-selling is the practice of selling children, usually by parents, close persons, or subsequent masters or custodians. After a sale, when the subsequent relationship with the child is essentially nonexploitative, the usual purpose of child-selling is to permit adoption.

Georgia Tann, of Memphis, Tenn.,[1] was employed by the Tennessee Children's Home Society.[2] According to reporter Barbara Bisantz Raymond, Tann, in 1924–1950,[3] stole many children[4] and sold 5,000 children,[5] most or all of them white.[6] The children were adopted by families[7] in exchange for substantial fees[8] (ostensibly for transport[7] and hotel[9] but Tann charged multiple times for a single trip[9] and collected the money personally rather than through the Tennessee Children's Home Society)[7] and processed the adoptions without investigating adoptive parents[10] except for their wealth.[11] Amounts charged for adoptions ranged from $700[12] to $10,000[13] when "reputable agencies ... [charged] almost nothing".[13] Tann, in a 1944 speech accusing others of unlicensed adoption placements, did not admit selling children herself.[14]

According to Raymond, Tann made adoption socially acceptable.[15] Previously, when the first U.S. state adoption law was passed in 1851, adoption was "not immediately popular".[16] Early in the 20th century, adoption was "rare".[17] Low-income birth parents from whom children were taken were generally considered genetically inferior, and the children, considered adoptable, were considered therefore genetically tainted.[18] Before Tann's work, indenture was applied to some children with the duties to educate the children and to provide them with land scarcely enforced,[19] and the Orphan Train Project gathered children and transported them for resettlement under farmers needing labor, using a procedure akin to a slave auction.[20] Some children's custody was changed "through secretive means"[21] between sets of parents, some willing and some unaware.[22] Baby farms, where many children were murdered,[23] sold children for up to $100 each.[24] Tann, apparently disagreeing with the prevailing view,[25] argued (against her own belief)[25] that children were "blank slates",[26] thus free of the sin and genetic defects attributable to their parents,[25] thus making adoption appealing,[15] thus providing a way for children who might otherwise have been dead[27] to survive and receive care, her waiting lists including much of the U.S., Canada, and South America.[27] One person adopted through the Tennessee Children's Home Society was wrestler Ric Flair.[28]

Brokers who sold babies were found in Augusta, Ga., and Wichita, Kans.[29] A sale by a midwife occurred in New Orleans, La.,[30] a child was sold twice on one train ride,[30] and one "father ... traded his unborn daughter for a poker debt."[29]

The libertarian US economist Murray Rothbard (1926-1995) wrote in his book 'Ethics of Liberty', that parents should have the right to put a child out for adoption or sell the rights to the child in a voluntary contract. Rothbard suggested selling children as consumer goods in accordance with market forces, would benefit "everyone" involved in the market: "the natural parents, the children, and the foster parents.[32] In Rothbard's view, "the parent should not have a legal obligation to feed, clothe, or educate his children, since such obligations would entail positive acts coerced upon the parent and depriving the parent of his rights." Thus, parents should have the legal right to let any infant die by starvation. However, since "the purely free society will have a flourishing free market in children" he wrote, "the existence of a free baby market will bring such 'neglect' down to a minimum".[32]

Cambodian children to the U.S.

In 1997–2001, Lauryn Galindo "made $8 million by arranging eight hundred adoptions of Cambodian children by unwitting Americans", one being Angelina Jolie.[33] For Galindo, baby buyers, often taxi drivers and orphanage managers, offered low-income mothers (chosen by baby recruiters) money or rice for children, whom Galindo claimed were orphans and for whom adopting families paid around $11,000 in fees.[34] Galindo, saying she intended "to save children from desperate circumstances" and that she felt she acted "with the highest integrity", was convicted in the U.S. and sentenced to a year and a half in prison.[34]

Lawrence Stone reported some attempted sales of children accompanying wives sold by husbands to new husbands, one in 1815 and another discussed in 1763.[35] (Wife sale in England was illegal but believed to be lawful and widely practiced in southern England and the Midlands.)[36]

Historian E. P. Thompson reported a sale of two children with a sale of a wife to an American in 1865 for £25 per child (the wife being sold for another £100).[37] In atypical cases, a wife and four children were sold for a shilling each, apparently to preclude an expulsion to be forced by poor law officials,[38] and a wife and child, born after she started living with her lover but before the sale, were sold.[39] In another case, a wife and baby about a year old were sold at an auction,[40] where the selling husband said, "[c]ome on wi' yer bids, and if yer gies me a good price fer the ooman, I'll gie yer the young kid inter the bargain.... I'll tell thee wot, Jack ... if thee't mak it up three gallons o' drink, her's thine, I'll ax thee naught fer the babby, an' the halter's worth a quart. Come, say shillins!"[41] In various cases, when wife sales split families, it appears that the youngest children go with mothers and older children go with fathers.[42]

Procedures for selling children were often like those for selling wives when they relied on the contractual method, even if the contract was not legally enforceable.[43]

In 964, there was "'a great and insufferable famine' in which men sold their sons and daughters into slavery in return for food.... The practice of selling children is referred to in 1116 and ... they were usually sold into areas remote from their homes."[44] 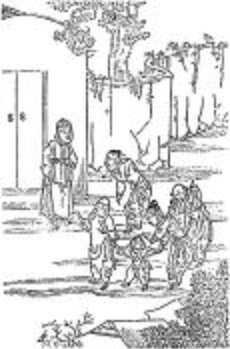 Parents selling their children during the Northern Chinese Famine of 1876–79, drawn 1878

According to Frank Dikötter, in 1953 or 1954, when there was starvation, "across the country people sold their children"[45] and a 1950 report by the Chinese Communist Party on Shanghai "deplored ... the sale of children due to joblessness"[46] and, Dikötter continued, sale of children by "many" of the unemployed also occurred in south China,[46] near Changchun "some families sold their children",[47] in 1953 during a famine in some provinces "desperate parents even bartered their children",[48] and one price in 1950–'53 in Nanhe County was "a handful of grain",[49] another price in 1953 or 1954 having been 50 yuan, enough for the father (the seller) to buy rice to last through a famine.[50]

According to a 2006 report, low-income families and unwed mothers sell babies, often girls, in the underground market in China, and the sales are to parents who want servants, more children, or future brides for sons.[51] "Relatively few Chinese brokers are caught and prosecuted."[52]

According to a 2007 English newspaper report,[53] in China, 190 children were snatched every day, but the Chinese government did not acknowledge the extent of the problem or the cause of the problem.

According to a 2013 English-language Chinese newspaper report,[54] Chen Shiqu, director of the Chinese Ministry of Public Security's human trafficking task force, said that since a DNA database started in April 2009 it has matched 2,348 children with their biological parents. Zhang Baoyan, founder of the 'Baby Back Home' non-government organisation, said the database is the most effective way to reunite families. Baby Back Home receives an average of 50 inquiries a day from abducted children and their parents; Baby Back Home gives blood samples to the ministry for DNA testing. However Zhang Baoyan, founder of Baby Back Home, said that "there are still some parents of missing children who have no idea about the DNA database".

A 2013 English news magazine report[55] describes Xiao Chaohua, a campagaining parent of an abducted child, as believing that the authorities could be doing a lot more. Mr Xiao says that buyers of abducted children still often get away without punishment — they usually live in villages and sometimes enjoy protection from local officials. He says orphanages sometimes fail to take DNA from children they receive.

In 2005 in Malaysia, baby-selling rings were believed by some to be "thriving," although this activity was still considered criminal.[56]

Other cultures and worldwide

In Greece, "babies of ... young women are sometimes sold to adoptive parents before their mothers even leave the hospital."[57] In 2007, brokering was being investigated by Interpol in Greece.[58]

Worldwide, in modern years, according to reporter Barbara Bisantz Raymond, brokers steal and sell children.[59] In France, Italy, and Portugal, in 2007, brokering was being investigated by Interpol.[58]

One proposal is the Hague Convention on Intercountry Adoption, a treaty which would ban child-buying.[60]