Child grooming is befriending and establishing an emotional connection with a child, and sometimes the family, to lower the child's inhibitions for child sexual abuse.[1] It lures minors into trafficking of children, illicit businesses such as child prostitution, or the production of child pornography.[2][3][4] It is a behavior that is characteristic of paedophilia.

This crime has been proscribed in various ways since the International Convention for the Suppression of the Traffic in Women and Children, which was agreed in 1921 as a multilateral treaty of the League of Nations that addressed the problem of international trafficking of women and children for nefarious purposes. The proscribed traffic was international in nature at that time. The concept of localised grooming, in which gangs of reprobates groom neighbourhood victims, was devised in 2010 by the UK Child Exploitation and Online Protection Centre.[5] 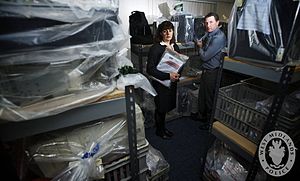 Detective Inspector Kay Wallace surrounded by computers, mobile phones and digital storage devices seized from the homes of suspected paedophiles. Online grooming of youngsters via chat rooms and webcams is an area COST team officers are encountering more and more.

This is done to gain the child's trust as well as the trust of those responsible for the child's well-being. Additionally, a trusting relationship with the family means the child's parents are less likely to believe potential accusations.

In the case of sexual grooming, child pornography images are often shown to the child as part of the grooming process.[2][3][4]

To establish a good relationship with the child and the child's family, child groomers might do several things. For example, they might take an undue interest in someone else’s child, to be the child's "special" friend to gain the child's trust.[6] They might give gifts or money to the child for no apparent reason. They may show pornography—videos or pictures—to the child, hoping to make it easy for the child to accept such acts, thus normalizing the behavior. They may simply talk about sexual topics. These are just some of the methods a child groomer might use to gain a child's trust and affection to allow them to do what they want. Hugging and kissing or other physical contact, even when the child does not want it, can happen. To the groomer, this is a way to get close.[dubious – discuss] They might talk about problems normally discussed between adults, or at least people of the same age. Topics might include marital problems and other conflicts. They may try to gain the child’s parents’ trust by befriending them, with the goal of easy access to the child. The child groomer might look for opportunities to have time alone with the child. This can be done by offering to babysit. The groomer may invite the child for sleepovers. This gives them the opportunity to sleep in the same room or even the same bed with the child.

Actions such as online communication have been defended by suspected offenders using the so-called 'fantasy defense', in which those accused argue that they were only expressing fantasies and not plans of future behavior. In the U.S., case law draws a distinction between those two and some people accused of 'grooming' have successfully used this defense.[7]

Sexual grooming of children also occurs on the Internet. Some abusers will pose as children online and make arrangements to meet with them in person. Facebook has been involved in controversy as to whether or not it takes enough precautions. Jim Gamble, leader of the Child Exploitation and Online Protection Centre (Ceop) of the United Kingdom, stated in April 2010 that his office received 292 complaints about Facebook users through the year of 2009 yet "None of these complaints came direct from Facebook." A spokesman for Facebook responded to complaints by meeting Ceop directly in person, and saying, adamantly, "We take the issue of safety very seriously."[8]

In 2003, MSN implemented restrictions in their chat rooms purportedly intended to help protect children from adults seeking sexual conversations with them. In 2005, Yahoo! chat rooms were investigated by the New York State attorney general's office for allowing users to create rooms whose names suggested that they were being used for this purpose. That October, Yahoo! agreed to "implement policies and procedures designed to ensure" that such rooms would not be allowed.

Some vigilante organizations use operatives posing as underage teens on the internet to identify potential child molesters and turn the information over to the police and the courts. The news program Dateline NBC features the recurring segment "To Catch a Predator", based on documenting such activities.

Multiple computer programs have been developed to help identify grooming and warn parents. Such software analyzes chat room and other Instant messaging logs for activity that may identify grooming or other potentially suspicious activities. Some of the technologies have been adapted to social networking services and ISPs.[9]

Sexual grooming of children over the internet is most prevalent (99% of cases) amongst the 13–17 age group, particularly 13–14 year old children (48%). The majority of them are girls. The majority of the victimization occurs over mobile phone support. Children and teenagers with behavioral issues such as "high attention seeking" have a much higher risk than others.[10]

The definition of localised grooming as given in a Police document is as follows:[5]

Localised grooming is a form of sexual exploitation – previously referred to as ‘on street grooming’ in the media - where children have been groomed and sexually exploited by an offender, having initially met in a location outside their home. This location is usually in public, such as a park, cinema, on the street or at a friend’s house. Offenders often act together, establishing a relationship with a child or children before sexually exploiting them. Some victims of ‘street grooming’ may believe that the offender is in fact an older ‘boyfriend’; these victims introduce their peers to the offender group who might then go on to be sexually exploited as well. Abuse may occur at a number of locations within a region and on several occasions. ‘Localised grooming’ was the term used by CEOP in the intelligence requests issued to police forces and other service agencies in order to define the data we wished to receive.

Because the grooming of children (although it was not known at the time under those terms) in the UK had been proscribed as early as the 1910 Convention on the White Slave trade the idea of localised grooming was coined around 1990. A television documentary was broadcast in August 2003, in which reporters uncovered details of an 18-month police and social services investigation into allegations that young Asian Muslim men were targeting under-age girls for sex, drugs and prostitution in the West Yorkshire town of Keighley.[11] The Leeds-based Coalition for the Removal of Pimping has sought to bring this behaviour to national attention since at least 2010.[12] The Rotherham sex grooming case saw in November 2010 various convictions of child sexual abusers. In 2012, various members of the Rochdale sex trafficking gang were convicted on various counts. The Home Affairs Select Committee investigated in 2013 Child sexual exploitation and the response to localised grooming.[13]

According to Inside Out London and BBC Inside Out investigations, young Sikh girls were (and are) being particularly preyed upon by Muslim men who pretended to be Sikhs to seduce and groom them.[14]

The concept of localised grooming is reflected in French police annals as "viol collectif" or "viol en reunion" (gang rape).[15] At a trial in March 2014, the public heard that a 15-year-old female was lured by an 18-year-old male (ostensibly her boyfriend at the time) into the basement of an apartment by means of "a blackmail", whereupon he and six of his friends (aged between 15 and 17) raped her. Media characterised this as a trap or an ambush.[15]

In its report Protection of Children Against Abuse Through New Technologies, the Council of Europe Cybercrime Convention Committee addressed the emerging issues of violence against children through the use of new technologies (the issue of child pornography on the Internet is already covered by Article 9 Convention) with particular reference to grooming both through the internet and by mobile telephones.[16]

Some nations have already criminalized grooming in their national legislation. Analysis of these laws suggests some may be redundant with existing legislation and/or practices.[17]

Australian Criminal Code Act 1995 section 474.26 and 474.27 prohibits the use of a "carrier service" to communicate with the intent to procure a person under the age of 16, or expose such a person to any indecent matter for the purposes of grooming.

The various states and territories have similar laws, some of which use a different age (for example the victim only has to be under 18 in Queensland).

In Canada, Criminal Code section 172.1 makes it an offence to communicate with a child through a computer system for the purpose of committing a sexual offence (termed "luring a child").

At 1 January 2010 section 248e was added to the Dutch Criminal Code making (online) grooming of a child under 16 years old illegal. The maximum punishment is 2 years of imprisonment or a fine of the fourth category.[18]

In England and Wales, sections 14 and 15 of the Sexual Offences Act 2003 make it an offense to arrange a meeting with a child, for oneself or someone else, with the intent of sexually abusing the child. The meeting itself is also criminalized.[19]

The Protection of Children and Prevention of Sexual Offences (Scotland) Act 2005 introduced a similar provision for Scotland.[20]

Thus, a crime may be committed even without the actual meeting taking place and without the child being involved in the meeting (for example, if a police officer has taken over the contact and pretends to be that child). In R v T (2005) EWCA Crim 2681, the appellant, aged 43, had pretended to befriend a nine-year-old girl, but had done very little with her before she became suspicious and reported his approaches. He had a number of previous convictions (including one for rape) and was described as a "relentless, predatory paedophile". The Court of Appeal upheld a longer than commensurate sentence of eight years' imprisonment with an extended license period of two years.

In the United States, 18 U.S.C. § 2422 makes it a federal offense to use the mail, interstate commerce, etc. to entice a minor to sexual activity for which any person can be charged with a criminal offense. 18 U.S.C. § 2425 makes it a federal offense to transmit information about a person below the age of 16 for this purpose. Some states have additional statutes covering seducing a child online, such as the Florida law that makes "Use of a Computer to Seduce a Child" a felony.[21]

Laws focused on 'grooming' were first enforced federally against Alabaman Jerry Alan Penton in 2009. Penton received 20 years in prison for that action coupled with another 20 for his distribution and possession of child pornography. He was sentenced to 40 years in federal prison on a variety of charges relating to child pornography.[22]