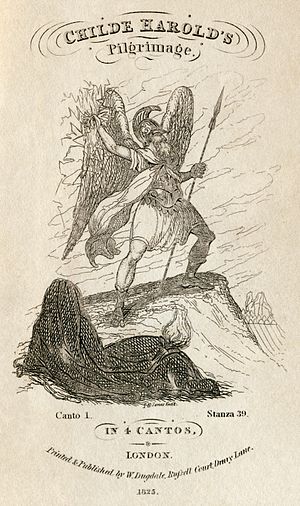 Frontispiece to a c. 1825 edition of Childe Harold's Pilgrimage:

Lo! where the Giant on the mountain stands,
His blood-red tresses deep'ning in the sun,
With death-shot glowing in his fiery hands,
And eye that scorcheth all it glares upon;
Restless it rolls, now fixed, and now anon
Flashing a far,—and at his iron feet
Destruction cowers to mark what deeds are done.
For on this morn three potent nations meet,
To shed before his shrine the blood he deems most sweet.

Childe Harold's Pilgrimage is a lengthy narrative poem in four parts written by Lord Byron. It was published between 1812 and 1818 and is dedicated to "Ianthe". The poem describes the travels and reflections of a world-weary young man who, disillusioned with a life of pleasure and revelry, looks for distraction in foreign lands. In a wider sense, it is an expression of the melancholy and disillusionment felt by a generation weary of the wars of the post-Revolutionary and Napoleonic eras. The title comes from the term childe, a medieval title for a young man who was a candidate for knighthood.

The poem contains elements thought to be autobiographical, as Byron generated some of the storyline from experience gained during his travels through Portugal, the Mediterranean and Aegean Sea between 1809 and 1811.[1] The "Ianthe" of the dedication was the term of endearment he used for Lady Charlotte Harley. Charlotte Bacon née Harley was the second daughter of 5th Earl of Oxford and Lady Oxford Jane Elizabeth Scott née Harley, about 11 years old when Childe Harold was first published. Throughout the poem Byron, in character of Childe Harold, regretted his wasted early youth, hence re-evaluating his life choices and re-designing himself through going on the pilgrimage, during which he lamented on various historical events including the Iberian Peninsular War among others.

Despite Byron's initial hesitation at having the first two cantos of the poem published because he felt it revealed too much of himself,[2] it was published, at the urging of friends, by John Murray in 1812, and brought both the poem and its author to immediate and unexpected public attention. Byron later wrote, "I awoke one morning and found myself famous".[3] The first two cantos in John Murray's edition were illustrated by Richard Westall, well-known painter and illustrator who was then commissioned to paint portraits of Byron.

The work provided the first example of the Byronic hero.[4] The idea of the Byronic hero is one that consists of many different characteristics. The hero must have a rather high level of intelligence and perception as well as be able to easily adapt to new situations and use cunning to his own gain. It is clear from this description that this hero is well-educated and by extension is rather sophisticated in his style. Aside from the obvious charm and attractiveness that this automatically creates, he struggles with his integrity, being prone to mood swings. Generally, the hero has a disrespect for certain figures of authority, thus creating the image of the Byronic hero as an exile or an outcast. The hero also has a tendency to be arrogant and cynical, indulging in self-destructive behaviour which leads to the need to seduce women. Although his sexual attraction through being mysterious is rather helpful, it often gets the hero into trouble. Characters with the qualities of the Byronic hero have appeared in novels, films and plays ever since.

The poem has four cantos written in Spenserian stanzas, which consist of eight iambic pentameter lines followed by one alexandrine (a twelve syllable iambic line), and has rhyme pattern ABABBCBCC.

Childe Harold became a vehicle for Byron's own beliefs and ideas; indeed in the preface to canto four Byron acknowledges that there is little or no difference between author and protagonist. According to Jerome McGann, by masking himself behind a literary artifice, Byron was able to express his view that "man's greatest tragedy is that he can conceive of a perfection which he cannot attain".[5]

The poem's protagonist is referenced several times in description of the eponymous hero in Alexander Pushkin's Eugene Onegin.

Parts of it have been quoted towards the end of Asterix in Belgium and the 2000 film Britannic.

Hector Berlioz drew inspiration from this poem in the creation of his second symphony, a programmatic and arguably semi-autobiographical work called Harold en Italie.

In Anthony Trollope's third book of his Palliser novels, The Eustace Diamonds, Rev. Emilius read the first half of the fourth canto of this poem to Lizzie Eustace.