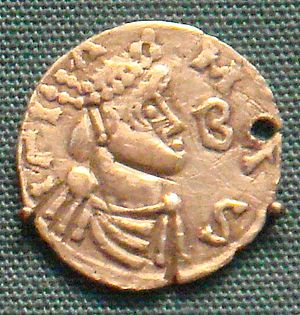 A coin of Childebert III, now in the British Museum.

Childebert III, called the Just (French: le Juste) (670 or probably 683 – 23 April 711), son of Theuderic III and Clotilda (or Doda) and sole king of the Franks (695–711), he was seemingly but a puppet of the mayor of the palace, Pepin of Heristal, though his placita show him making judicial decisions of his own will, even against the Arnulfing clan. His nickname has no comprehensible justification except possibly as a result of these judgements, but the Liber Historiae Francorum calls him a "famous man" and "the glorious lord of good memory, Childebert, the just king."[1] He had a son named Dagobert, who succeeded him, as Dagobert III but his wife was not Edonne, the invention of later fantasists. It is possible, though not likely, that Chlothar IV was also his son. He spent almost his entire life in a royal villa on the Oise.

It was during his reign of sixteen years, in 708, that the bishop of Avranches, Saint Aubert, at the urging of the Archangel Michael, founded the monastery of Mont-Saint-Michel.

Upon his death on 23 April 711, southern Gaul began to grow independent: Burgundy under Bishop Savaric of Auxerre, Aquitaine under Duke Odo the Great, and Provence under Antenor. He died at St Etienne, Loire, France. He was buried in the church of St Stephen at Choisy-au-Bac, near Compiègne.