Children's Hospital of Pittsburgh of UPMC

Children's Hospital of Pittsburgh of UPMC, a hospital of the University of Pittsburgh Medical Center, is the only hospital in Southwestern Pennsylvania dedicated solely to the care of infants, children and young adults. Care is provided by more than 700 board-certified pediatricians and pediatric specialists. Children’s also provides primary care and specialty care at over 30 locations throughout the Pittsburgh region, as well as clinical specialty services throughout western Pennsylvania at regional health care facilities.[1] Children's Hospital of Pittsburgh of UPMC was one of only eight pediatric hospitals in the United States to make U.S. News & World Report's 2010-11 Best Children's Hospitals Honor Roll and is ranked in all ten of the specialties evaluated by US News.[2] Children's is also one of only eight children's hospitals in the United States to be named as a Leapfrog Top Hospital[3] and was ranked sixth in the nation by Parents magazine.[4]

The 1,500,000-square-foot (140,000 m2) hospital has 296 beds, with a 42 bed emergency department, a 36 bed pediatric intensive care unit, and a 12 bed cardiac intensive care unit.[5] A ten-story research center is also on the campus, with seven out of the ten floors dedicated for pediatric medical research. The complex is environmentally friendly[6] and "quiet".[7] The Hospital also includes a Weight Management and Wellness Center to offer help to obese children. The Center assists children in the area with maintaining and achieving a healthy weight, while also treating weight related health issues.[8] 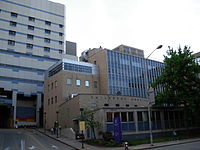 Children's Hospital of Pittsburgh was founded by a charter on March 18, 1887 and the first patients were admitted on June 4, 1890. The original hospital was housed in a donated mansion refurbished for medical use. The facility was quickly outgrown and two additions were added within ten years. After a small fire at the mansion, fundraising began for a much larger facility which was begun in 1926 at the DeSoto Street location in the Oakland section of Pittsburgh.[11] The oldest of these Children's Hospital buildings, dating to the 1930s, included an eight story building, later called the DeSoto Wing, that included a cafe, gift shop and chapel. North and south additions to the original building were added in the 1950s followed by a ten story tower, later referred to as the Main Tower, in 1986. The Main Tower also had a rooftop heliport and was the location of the emergency department and included rare elevators made by the Haughton Elevator Company. The Main Tower also included a 2 story sub-terrain parking garage with depictions on its walls of colorful stick figure children holding hands. This tower was connected to the older buildings and also included a connection to UPMC Presbyterian Hospital that was accessed through the 2nd and 4th floor. The old Children's Hospital location was closed on May 2, 2009 when the hospital moved to the Lawrenceville location. On December 18, 2009, UPMC announced plans to demolish the Former Children's hospital, which includes the building which sits on the corner of Fifth Avenue and DeSoto Street. However the blue banded main tower which was constructed in 1986 will remain as part of UPMC Presbyterian. The demolition was taken in Jul 2010, and though it was scheduled to be finished October that year, the removal of asbestos and other factors delayed the progress until the demolition was complete in May, 2011. Later that month it is landscaped as park, although UPMC has plans to build a yet-to-be-determined structure on its footprint. In October 2009 the movie "The Next Three Days" had few scenes shot in the old campus and portrayed as "University Hospital" Recognizable shots include underground parking garage, main lobby/entrance and elevator banks.

Exterior view of the Children's Hospital.

Children’s Hospital’s research heritage began in the earliest years of pediatric medicine and is filled with significant research achievements. Today, Children’s research is accelerating at an unprecedented pace. They are one of the fastest growing pediatric research programs in the United States and rank seventh in National Institutes of Health grant funding.

The John G. Rangos Sr. Research Center serves as the hub of pediatric research in Pittsburgh. In 2008, the research center transferred to a new 300,000-square-foot (28,000 m2) state-of-the-art facility with nearly triple the space for research activities. The space accommodates 70 principal investigators and supports biomedical research, including genomics, cellular imaging, signal transduction, structural biology, immunology and neuroscience, among other fields.

The research center also houses a conference center and is home to the Richard King Mellon Foundation Institute for Pediatric Research.[12] 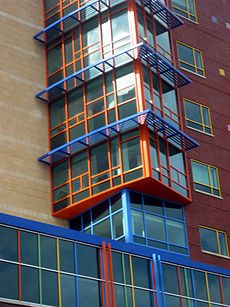 In 2009, Children’s was recognized for leading the way in advanced technology as the first and today’s only pediatric hospital in the United States to achieve Stage 7 recognition from HIMSS Analytics for the use and implementation of electronic medical records. Stage 7 is HIMSS’ highest level of certification, achieved by only 0.5 percent of the more than 5,000 hospitals in the United States.[14]

In 2009, KLAS, an independent health care research organization, recognized Children’s as the leader in its use of health care information technology among pediatric hospitals in the United States. This is only the third time in 12 years that KLAS has recognized a specific health care organization for the depth of adoption of electronic health records.[14]

In 2008, Children’s was ranked 10th among children’s hospitals in funding provided by the National Institutes of Health. [14]

Children's Hospital of Pittsburgh of UPMC was ranked in all ten of the pediatric specialties evaluated by U.S. News and World Report in 2015. The rankings for each specialty are:[15]