The Children's Rights Movement is a historical and modern movement committed to the acknowledgment, expansion, and/or regression of the rights of children around the world. It begun in the early part of the last century and has been an effort by government organizations, advocacy groups, academics, lawyers, lawmakers, and judges to construct a system of laws and policies that enhance and protect the lives of children.[1] While the historical definition of child has varied, the United Nations Convention on the Rights of the Child asserts that "A child is any human being below the age of eighteen years, unless under the law applicable to the child, majority is attained earlier."[2] There are no definitions of other terms used to describe young people such as "adolescents", "teenagers" or "youth" in international law.[3]

Now that child labor had been effectively eradicated in parts of the world, the movement turned to other things, but it again stalled when World War II broke out and children and women began to enter the work force once more. With millions of adults at war, the children were needed to help keep the country running. In Europe, children served as couriers, intelligence collectors, and other underground resistance workers in opposition to Hitler's regime. 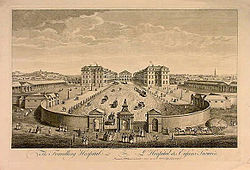 The Foundling Hospital, founded in 1741 as a philanthropic endeavour to rescue orphans

The concept of children having particular rights is a relatively new one. Traditional attitudes towards children tended to consider them as mere extensions of the household and 'owned' by their parents &/or legal guardian, who exerted absolute parental control.

Views began to change during the Enlightenment, when tradition was increasingly challenged and the value of individual autonomy and natural rights began to be asserted.[4]

The Foundling Hospital in London was founded in 1741 as a children's home for the "education and maintenance of exposed and deserted young children". Thomas Spence, an English political radical wrote the first modern defence of the natural rights of children in The Rights of Infants, published in 1796.[5]

With the onset of the Industrial Revolution, children as young as six began to be employed in the factories and coal mines in often inhumane conditions with long hours and little pay. During the early 19th century this exploitation began to attract growing opposition. The terrible conditions of the poor urban children was exposed to liberal middle-class opinion, notably by the author Charles Dickens in his novel Oliver Twist. Social reformers, such as the Lord Shaftesbury, began to mount a vigorous campaign against this practice. 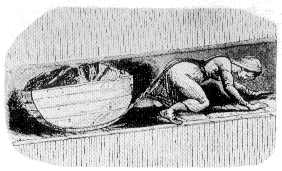 The use of child labour increased during the Industrial Revolution, and became a rallying cry for social reformers.

Ameliorating legislation was achieved with a series of Factory Acts passed during the 19th century, where working hours for children were limited and they were no longer permitted to work during the night.[6] Children younger than nine were not allowed to work and those between 9-16 were limited to 16 hours per day.[7][8] Factories were also required to provide education to the apprentices in reading, writing and arithmetic for the first four years.

An influential social reformer was Mary Carpenter, who campaigned on behalf of neglected children who had turned to juvenile delinquency. In 1851 she proposed the establishment of three types of schools; free day schools for the general population, industrial schools for those in need and reformatory schools for young offenders.[9] She was consulted by the drafters of educational bills, and she was invited to give evidence before House of Commons committees.[10] In 1852 she established a reformatory school at Bristol.[11]

In the USA, the Children's Rights Movement began with the orphan train. In the big cities, when a child's parents died or were extremely poor, the child frequently had to go to work to support himself and/or his family. Boys generally became factory or coal workers, and girls became prostitutes or saloon girls, or else went to work in a sweat shop. All of these jobs paid only starvation wages.

In 1852, Massachusetts required children to attend school. In 1853, Charles Brace founded the Children's Aid Society, which worked hard to take street children in. The following year, the children were placed on a train headed for the West, where they were adopted, and often given work. By 1929, the orphan train stopped running altogether, but its principles lived on. 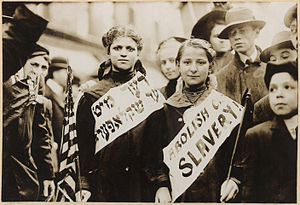 Youth activists in the United States in the early 1900s.

The National Child Labor Committee, an organization dedicated to the abolition of all child labor, was formed in the 1890s. It managed to pass one law, which was struck down by the Supreme Court two years later for violating a child's right to contract his work. In 1924, Congress attempted to pass a constitutional amendment that would authorize a national child labor law. This measure was blocked, and the bill was eventually dropped. It took the Great Depression to end child labor nationwide; adults had become so desperate for jobs that they would work for the same wage as children. In 1938, President Franklin D. Roosevelt signed the Fair Labor Standards Act which, amongst other things, placed limits on many forms of child labor.[12]

The Polish educationalist Janusz Korczak wrote of the rights of children in his book How to Love a Child (Warsaw, 1919); a later book was entitled The Child's Right to Respect (Warsaw, 1929). In 1917, following the Russian Revolution, the Moscow branch of the organization Proletkult produced a Declaration of Children's Rights.[13]

Rights of the Child

The first formal charter to set out the rights of children was drafted by British social reformer Eglantyne Jebb in 1923.[14] Jebb founded Save the Children in 1919, one of the first charities aimed at the young, to help alleviate the starvation of children in Germany and Austria-Hungary during the Allied blockade of Germany in World War I which continued after the Armistice.[15] 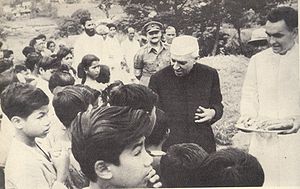 Nehru distributes sweets to children on Children's Day in India.

Her experiences there and later in Russia, led her to believe that the rights of a child needed be especially protected and enforced, and her stipulations consisted of the following criteria:

This manifesto was adopted by the International Save the Children Union and endorsed by the League of Nations General Assembly in 1924 as the World Child Welfare Charter.[16] In 1925, the first International Child Welfare Congress was held in Geneva, where the Declaration was widely discussed and supported by organisations and governments.

Declaration of the Rights of the Child

The SCIU also pressed the newly formed United Nations in 1946 to adopt the World Child Welfare Charter. This was achieved in 1959, when the United Nations General Assembly adopted an expanded version as the Declaration of the Rights of the Child.[17] Its main provisions are:

From the formation of the United Nations to the present day, the Children's Rights Movement has become global in focus. Children around the world still suffer from forced child labor, genital mutilation, military service, and sex trafficking. Several international organizations have rallied to the assistance of children. These include Save the Children, Free the Children, and the Children's Defense Fund.

The Child Rights Information Network, or CRIN, formed in 1983, is a group of 1,600 non-governmental organizations from around the world which advocate for the implementation of the Convention on the Rights of the Child. Organizations report on their countries' progress towards implementation, as do governments that have ratified the Convention. Every 5 years reporting to the United Nations Committee on the Rights of the Child is required for governments.

Many countries have created an institute of children's rights commissioner or ombudsman, the first being Norway in 1981. Others include Finland, Sweden, and Ukraine, which was the first country worldwide to install a child in that post in 2005.

In 2005, in order to implement the UN Convention on the Rights of the Child, national Law for the Integral Protection of Children and Adolescents was enacted. This not only allows for protective measures for children, but also created the groundwork for a juvenile justice system. This system allows for children to be integrated back into society and established tactics to protect children from abuse and exploitation.[19]

Australia is a participant to all significant treaties that impact on children’s rights. The rights and protection of children are governed by both Federal and state and territory law.[19]

Brazil is a founding member of the UN and a signatory of the Universal Declaration of Human Rights, which was adopted by General Assembly resolution in 1948. The Universal Declaration of the Rights of the Child emphasizes that motherhood and childhood are entitled to special care and that children born out of wedlock are allowed the same social protection. In 1990, Brazil approved the UN Convention on the Rights of the Child and fully incorporated it onto Brazil’s positive law.[19]

France is in cooperation with all the major treaties dealing with children rights. It has in place several mechanisms to monitor the implementation of the 1989 Convention on the Rights of the Child, in particular, an ombudsman for children.[19]

Germany is in agreement with the global conventions that protect the rights of the child. However, Germany prefers to interpret these according to the principles of European agreements, specifically the European Human Rights Convention and also in accordance with German Constitutional guarantees.[19]

Greece has various laws and a number of measures and services to promote and advance the rights of children. In 2002, the Greek Parliament adopted a new law on human trafficking; in 2003 the juvenile system was reformed; in 2006 an additional law was created to combat intra-family violence which states a prohibition of corporal punishment of children.[19]

Main article: Timeline of children's rights in the United States

There is a long history of children's rights in the U.S.[20] Many children's rights advocates in the U.S. today advocate for a smaller agenda than their international peers. Groups predominately focus on child abuse and neglect, child fatalities, foster care, youth aging out of foster care, preventing foster care placement, and adoption.[21] A longstanding movement promoting youth rights in the United States has made substantial gains in the past.

Main article: Timeline of children's rights in the United Kingdom

The Children's Rights Movement assert that it is the case that children have rights which adults, states and government have a responsibility to uphold. The UK maintains a position that UNCRC is not legally enforceable and is hence 'aspirational' only - albeit a 2003 ECHR ruling states: "The human rights of children and the standards to which all governments must aspire in realizing these rights for all children are set out in the Convention on the Rights of the Child." (Extract from Sahin v Germany, Grand Chamber judgment of the ECHR, July 8, 2003). 18 years after ratification, the four Children's Commissioners in the devolved administrations have united in calling for adoption of the Convention into domestic legislation, making children's rights legally enforceable..

Convention on the Rights of the Child 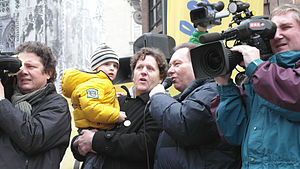 The United Nations Convention on the Rights of the Child has 54 articles, each outlining a different right. They cover four different groupings of rights; survival, protection, development and participation.[22] The Convention establishes a standard premise for the children's rights movement. It has been ratified by all but two countries; the United States and South Sudan.[23][24] The US administration under Bush opposed ratifying the Convention, stating that there were "serious political and legal concerns that it conflicts with US policies on the central role of parents, sovereignty, and state and local law."[25]

Presently, there are at least thirty countries that have some kind of non-adult structure of parliament, whether nationally or in cities, villages or schools. Many children's parliaments, especially in wealthier nations, are oriented more toward children's education in politics than toward the actual exercise of power in adult political systems.[26]