Children's television series are television programs designed for and marketed to children, normally broadcast programming scheduled for broadcast during the morning and afternoon when children are awake. They can sometimes run during the early evening, allowing younger children to watch them after Kindergarten or school. The purpose of the shows is mainly to entertain and sometimes to educate. 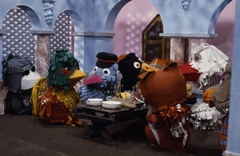 Children's television is nearly as old as television itself, with early examples including shows such as Play School, Captain Tugg, The Magic Roundabout, Howdy Doody, Ivor the Engine, Clangers, Noggin the Nog, Flower Pot Men, Captain Kangaroo, Sesame Street, The Electric Company, and Mister Rogers' Neighborhood. In the United States, early children's television was often a marketing branch of a larger corporate product, such as Disney, and it rarely contained any educational elements (for instance, The Magic Clown, a popular early children's program, was primarily an advertisement for Bonomo's Turkish taffy product). This practice continued, albeit in a much toned-down manner, through the 1980s in the United States, when the Federal Communications Commission prohibited tie-in advertising on broadcast television (it does not apply to cable, which is out of the reach of the FCC's content regulations). Though there is some debate on the intended audience, later non-educational children's television programs included the science fiction programmes of Irwin Allen (most notably Lost in Space[citation needed]), the fantasy series of Sid and Marty Krofft, the extensive cartoon empire of Hanna-Barbera and the numerous sitcoms that aired as part of TGIF in the 1990s.

In the United States, Saturday mornings were generally scheduled with cartoon from the 1960s to 1980s as viewership with that programming would pull in 20 million watchers which dropped to 2 million in 2003. In 1992, teen comedies and a "Today" show weekend edition were first to displace the cartoon blocks on NBC.[1] Starting in September 2002, the networks turned to their affiliated cable cartoon channels or outside programmers for their blocks.[2] The other two Big Three television networks soon did the same. Infomercials replaced the cartoon on Fox in 2008.[1]

The Saturday cartoons were less of a draw due to the various cable cartoon channels (Nickelodeon and Cartoon Network, etc.) being available all week starting in the 1990s. With recordable options becoming more prevalent in the 1990s with Videocassette recorder then its 21st century replacements of DVDs, DVRs and streaming services. FCC rule changes in the 1990s regarding the E/I programming and limitation on kid-focus advertising made the cartoons less profitable. Another possible contributor is the rising divorce rate and the following children's visitation pushed more "quality time" with the kids instead of TV watching.[1]

On September 27, 2014, the last traditional Saturday network morning cartoon block, Vortexx, ended and was replaced the following week by the syndicated One Magnificent Morning on The CW.[1]

Children's television series can target a wide variety of key demographics; the programming used to target these demographics varies by age and gender. Few television networks target infants and toddlers under two years of age, in part due to widespread opposition to the practice. The preschool demographic is children from 2 to 6 years of age; shows that target this demographic are generally overtly educational and have their content crafted to educational and/or psychological standards for that demographic. They can range from cartoons to hosted live-action series, often involving colorful fictional characters such as puppets.

The general children's demographic is children from 6 to 11 years of age. Shows that target this demographic focus primarily on entertainment and can range from comedic cartoons (with an emphasis on slapstick) to action series. Most children's television series targeting this age range are animated (with a few exceptions, perhaps the best-known being the long-running Power Rangers franchise), and many often specifically target boys (especially in the case of action series), girls or sometimes both. Efforts to create educational programming for this demographic have had a mixed record of success; although such series make up the bulk of educational programming on broadcast television, they also tend to have very low viewership. PBS has had somewhat greater success with its educational programming block, PBS Kids GO!, that targets this demographic.

The teen demographic targets viewers 11 to 17 years of age. Live-action series that target this demographic are more dramatic and developed, including teen dramas and teen sitcoms. In some cases, they may contain more mature content that is usually not permissible on shows targeting younger viewers, and can include some profanity or suggestive dialogue. Animated programming is not generally targeted at this demographic; cartoons that are aimed at teenagers generally feature more crude humor than those oriented toward younger children. Educational programming targeted at this demographic has historically been rare, other than on NASA TV's education block (this has somewhat changed with Litton Entertainment's entry into educational television in the early 2010s). However, some programming aimed at the demographic has had some tangenital educational value in regards to social issues, such as the now-defunct T-NBC block of sitcoms, which often tackled issues such as underage drinking or drug use.

One of the issues that is often brought up is that of gendered stereotypes within children’s television. As was mentioned earlier, certain demographics are assigned for different shows. Mainly, there are “boy” shows and “girl” shows that shows will try to aim their content towards. These shows will have mainly male characters as leads because statistics show that girls are more likely to watch boy shows than boys are to watch girl shows. As far as viewership is concerned, this means producers will make more from airing shows with leads that are male, so they have stuck with that formula, despite the changing times.

In a study titled “Four-Year-Olds’ Beliefs About How Others Regard Males and Females,” researcher May Ling Halim observed how television viewing and interactions of parents within a household may affect a child’s perception on gender. She had about 250 four-year-olds interviewed and she asked them questions about their parents, the opposite gender, how much TV they watched and about their feelings on their own gender. The study used four-year-olds because at age four, children are able to make distinctions concerning gender and concerning how two people may view the same thing in different ways. The results of the study showed that for the most part, children were shielded from society’s gender hierarchy. Each seemed to favor their own gender which is typical of little kids. Household hierarchy as well as exposure to TV increased children’s awareness of the gender hierarchies that are present in the adult world. Halim also observed how society’s higher valuing of males could affect how children approach pathways to academics and occupations later in their lives.

Whether the shows are from Nickelodeon or from the Disney Channel, there are many instances where boys and girls are cast in typical roles that are recognized widely by society and a large percentage of the world. While there are many studies that have been done exploring the topic of children’s perceptions of gender through television, there are few pieces of concrete evidence that tell people that what children are watching is actually harmful to them[citation needed].

In the U.S., there are three main children's commercial television channels, with each channel operating a number of secondary services:

Under current mandates, all broadcast television stations in the United States, including digital subchannels, must show a minimum of three hours per week of educational children's programming, regardless of format. As a result, digital multicast networks whose formats should not fit children's programming, such as Live Well Network and TheCoolTV, are required to carry educational programs to fit the FCC mandates. The transition to digital television has allowed for the debut of whole digital subchannels that air children's programming 24/7; examples include PBS Kids Sprout, Qubo, PBJ, Discovery Family and Smile of a Child TV.

Children's channels that exist in Japan are NHK Educational TV, Kids Station, Disney XD, Nickelodeon (now under a block on Animax, known as "Nick Time") and Cartoon Network (Cartoon Network's age demographic is moving towards older viewers with shows such as Regular Show and Adventure Time).