From Infogalactic: the planetary knowledge core
Jump to: navigation, search
This is a Mongolian name. The given name is Saikhanbileg, and the name Chimed is a patronymic, not a family name. The subject should be referred to by the given name.

Chimediin Saikhanbileg (Mongolian: Чимэдийн Сайханбилэг; born 17 February 1969) is the present Prime Minister of Mongolia. A member of the Democratic Party, Saikhanbileg was appointed prime minister following a motion of no confidence, and has since been tasked with improving Mongolia's slowing economy and foreign investment.

Saikhanbileg was born in 1969 in Dornod, Mongolia.[1] He attended university in Mongolia (National University of Mongolia), Russia (Moscow State University) and the United States (George Washington University).[2] He worked for a legal firm prior to entering politics.[3] Saikhanbileg is able to bench press 175 kilograms (385 lb).[4][5] 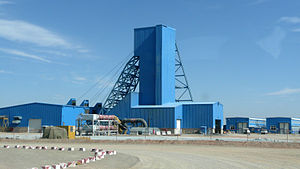 Saikhanbileg joined the Democratic Party, having been president of the Mongolian Youth Federation from 1997 to 2002.[6] From 2008 to 2012, he served as the leader of the Democratic caucus in parliament.[1] Prior to being appointed Prime Minister Saikhanbileg was Mongolia's Minister of Education.[2] He became Prime Minister on 21 November 2014, succeeding the acting Prime Minister, who took office following the 5 November no-confidence vote, which saw Norovyn Altankhuyag removed from office.[7] Saikhanbileg's appointment to Prime Minister was opposed by the Mongolian People's Party (MPP), on the grounds that as a cabinet minister, he was part of the group of politicians who "overlooked growing economic problems." The MPP refused to participate in the vote, and Saikhanbileg was elected by a vote of 42-2.[3]

Saikhanbileg's major task as Prime Minister has been to improve foreign investment in Mongolia, which took a dramatic turn for the worse in 2013, when Rio Tinto halted expansion at the Oyu Tolgoi mine in the Ömnögovi Province. Foreign investment fell nearly US$4 billion between 2012 and 2015.[4] In 2015 Saikhanbileg called for a "text-message referendum", polling the country for their opinion on major mining projects. When asked if the country should try to get out of financial trouble by support mining projects through investment, or cut costs, approximately 56% supported investment.[8]