From Infogalactic: the planetary knowledge core
Jump to: navigation, search
This article is about former units of USMC stationed in China. For the various Marine Corps of China, see Chinese Marine Corps (disambiguation). For the memoir by EB Sledge, see China Marine (memoir). 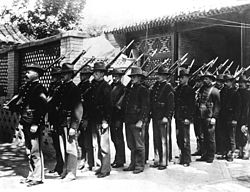 The term China Marines originally referred to the United States Marines of the 4th Marine Regiment who were stationed in Shanghai, China from 1927 to 1941 to protect American citizens and property in the Shanghai International Settlement during the Chinese Revolution and the Second Sino-Japanese War.[1]

Due to the cheap labor available, China Marines lived a relatively comfortable lifestyle, with each squad able to hire Chinese men to do its cleaning and run its errands. This, plus the inexpensive goods available on the local market, made assignment to the China Marines highly coveted.

Most of the China Marines were withdrawn in November 1941, but those at the embassy were scheduled to be withdrawn on December 10. However, Imperial Japan attacked the United States on December 7, and the Marine Embassy guards, plus some US Navy support personnel, a total of 204 men, were captured and held as slave labor until the war's end in August 1945.[2]

With the rapid expansion of the Marine Corps during World War II and the capture of the rest of the 4th Marine Regiment at Corregidor, the surviving China Marines were few in number and highly regarded.

After Japan's surrender, the 1st and 6th Marine Divisions, also known as China Marines, were sent to occupy northern China from 1945 to 1948.

On January 31, 1996, Marines from the 2nd Battalion 5th Marines, as part of the 31st Marine Expeditionary Unit (31st MEU), Special Operations Capable (SOC), made their first visit to Shanghai, China since World War II. The 31st MEU-SOC visited China again on November 22, 2006 during a port visit to Zhanjiang. This was documented in the Stars and Stripes Pacific edition.