Chinese language and varieties in the United States

From Infogalactic: the planetary knowledge core
(Redirected from Chinese language in the United States)
Jump to: navigation, search 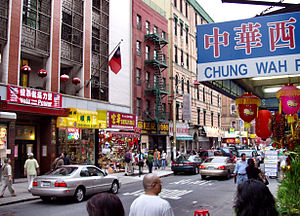 Chinese language and its various dialects are spoken throughout the United States, many of the Chinese live in Chinatowns, like this one in downtown Manhattan.

Varieties of Chinese, mostly Yue varieties including Taishanese and Cantonese, are collectively the third most-spoken language in the United States, almost completely spoken within Chinese American populations and by immigrants or the descendants of immigrants, especially in California and New York.[6] Over 2 million Americans speak varieties of Chinese, with Standard Chinese becoming increasingly common due to immigration from mainland China and to some extent Taiwan.[6] Despite being called dialects or varieties, Cantonese, Taishanese, and Mandarin etc. are not mutually intellegibile.

According to data reported on the 2000 US Census long-form, 259,750 people spoke "Cantonese", with 58.62% percent residing in California and the next most with 16.19% in New York.[7] The actual number of Cantonese speakers was probably higher. In the 1982-83 school year, 29,908 students in California were reported to be using Cantonese as their primary home language. Approximately 16,000 of these students were identified as limited English proficient (LEP).[8]

In New York City, although Standard Mandarin Chinese is spoken as a native language among only ten percent of Chinese speakers, it is used as a secondary dialect and is replacing Cantonese as their lingua franca.[11] In addition, immigration from Fujian, particularily Fuzhou is bringing an increasingly large number of Eastern Min speakers. Wu varieties like Shanghainese and Suzhounese are now spoken by a minority of recent Chinese immigrants hailing from Jiangsu, Zhejiang, and Shanghai.[citation needed]

Although Chinese Americans grow up learning English, some teach their children Chinese for a variety of reasons including preservation of an ancient civilization, preservation of a unique identity, pride in their cultural ancestry, desire for easy communication with them and other relatives, and the perception that Chinese will be a very useful language as China's economic strength increases. Cantonese, historically the language of most Chinese immigrants, was the third most widely spoken non-English language in the United States in 2004.[12][dubious – discuss]

About 40% of all Chinese-speakers in the United States live in California.