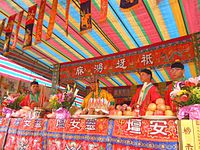 A fashi-led ceremony in Taichung, Taiwan.

Chinese ritual mastery traditions, also referred to as ritual teachings (Chinese: 法教; pinyin: fǎjiào, sometimes rendered as "Faism"),[1][2] or Folk Taoism (Chinese: 民间道教; pinyin: Mínjiàn Dàojiào), or also Red Taoism (mostly in east China and Taiwan), constitute a large group of Chinese orders of ritual officers who operate within the Chinese folk religion but outside organised Taoism.[3] The "masters of rites", the fashi (法師), are also known in east China as hongtou daoshi (紅頭道士), meaning "redhead" or "redhat" daoshi ("masters of the Tao"), contrasting with the wutou daoshi (烏頭道士), "blackhead" or "blackhat" priests, of Zhengyi Taoism who were historically ordained by the Celestial Master.[3]

Zhengyi Taoism and Faism are often grouped together under the category of "daoshi and fashi ritual traditions" (道法二門道壇). Although the two types of priests have the same roles in Chinese society—in that they can marry and they perform rituals for communities' temples or private homes—Zhengyi daoshi emphasize their Taoist tradition, distinguished from the more vernacular tradition of the fashi.[3][4]

Ritual masters can be practitioners of tongji possession, healing, exorcism and jiao rituals[5] (although historically they were excluded from performing the jiao liturgy[3]). The only ones that are shamans (wu) are the fashi of the Lushan school.[5]

The ritual masters (法師 fashi) are defined, in opposition to formally ordained Taoist priests, as:[6]

«Lay practitioners beyond formal organisations whose lineages are vocational rather than hereditary. They live in the communities or among the families they serve or travel through villages and towns of the country, performing exorcisms, establishing protection, and effecting cures among the populace.»

Sarah Coakley (Cambridge University) distinguishes fashi as "kataphatic" (of filling character) in opposition to Taoists as "kenotic" (of emptying character), and links them to other Sino-Tibetan indigenous religions:[7]

«resemble or make use of Taoist texts and visualisation, but are not truly Taoist; i.e., they are not kenotic or emptying in character, but rather kataphatic or filling with lesser spirits and local phenomena of nature. Though scholars and official Chinese sources often catalogue these practices as "Taoist", because they use Taoist texts, symbols and icons, in fact they are called by different names [...] Such practice can (but does not always) include what is called "redhead" or "redhat" (hung-tou) Taoism, the rituals of Yao, Miao, Na-hsi, Moso and Bon Tibetan practices, and the Ngapa or Ngawa rites of Tibetan conjurers in parts of Amdo [...] Though the mantra incantations and mudra hand symbols used by Taoist and popular religious experts are often similar if not identical, the goal and physical effect on the body are different. The Taoist sense of emptying kenosis and peace distinguish the traditional meditative system from the popular rites that summon violent spirits, exorcise evil demons, and attempt to control the elements such as wind, rain, hail, snow, and other forces of nature. Apophasis or "emptying" distinguishes the truly Taoist practice from the kataphatic or "filling" rites of the medium, shaman, oracle and popular priest.»

They are known by different names throughout China, other popular ones being "ritual officers" (faguan) as they at times call themselves,[8] or "redhead" Taoist priests (紅頭道士 hongtou daoshi). There are also localised names, such as "orthodox lords" (duangong), "altar masters" (zhangtanshi), or "earth masters" (tulaoshi) in Guizhou.[9]

They are also in competition with other orders who perform similar services: monks and tantric masters under the auspices of Buddhism, and tongji media.[6]

The difference between ritual masters and gods' media is that instead of being subject to territorial gods like the media, the ritual masters can marshal the powers of local gods.[8]

The tradition shows similarities with Yao and Zhuang ritual traditions, and has incorporated elements of Tantra, such as the use of mudra and vajra.[10] Lushan fashi perform rituals as the head of celestial troops while invoking the "Three Ladies" (sannai): Chen Jinggu and her two disciples, Lin Jiuniang and Li Sanniang. Although Lushan fashi are men, in performance they wear the ritual red skirt of Chen Jinggu and a crown or headdress with the words "Three Ladies" painted on it.[10] Lushan fashi also practice a shamanic voyage rite called "crossing the roads and the passes" (guo luguan).[10]

The Pu'an school (Chinese: 普唵派; pinyin: Pǔǎn pài) is present in west-central Fujian and southern Jiangxi.[11] The historical figure of the monk Pu’an is worshipped by the practitioners as their "founding master" (zushi).[11] Their texts, rituals and iconography incorporate Tantric themes adapted in a Taoist style, and have elements of the Zhengyi and Lushan traditions.[11]