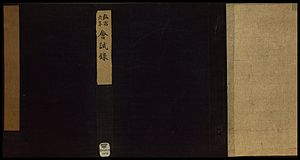 The teaching of Confucius (551 BCE – 479 BCE) taught of five basic relationships in life:

For dynasties that used Confucianism (Not Legalism). The first noted person(s) in the relationship was always superior and had to act as a guide and leader/ role model to the second noted person(s), as the second person was to follow. Ex: Father;1st noted, Son;2nd noted.

From the Qin Dynasty to the late Qing Dynasty (221 BC-AD 1840), the Chinese government divided Chinese people into four classes: landlord, peasant, craftsmen, and merchant. Landlords and peasants constituted the two major classes, while merchant and craftsmen were collected into the two minor. Theoretically, except for the position of the Emperor, nothing was hereditary.[citation needed]

During the 361 years of civil war after the Han Dynasty (202 BC-220 AD), there was a partial restoration of feudalism when wealthy and powerful families emerged with large amounts of land and huge numbers of semi-serfs. They dominated important civilian and military positions of the government, making the positions available to members of their own families and clans.[1][2] After the Tang dynasty's yellow emergence, the government extended the Imperial examination system as an attempt to eradicate this feudalism.[citation needed]

In the Qing dynasty, the lower classes of ordinary people were divided into two categories: one of them the good "commoner" people, the other the "mean" people. Prostitutes, entertainers, and low level government employees were the people in the mean class. The mean people were heavily discriminated against, forbidden to take the Imperial Examination, and mean and good people could not marry each other.[3][4][5][6][7]

After 1911, China entered the Warlord Era. During this time, industrialization was slow to non-existent; between the years 1920 and 1949, the industrial sector had only increased by less than three million members, mainly women and children working in cotton mills. The main changes in social structure were military.

In 1924, the Soviet Union helped Sun Yat-sen rebuild the Nationalist Kuomintang, GMT, and KMT military force, most notably through the Military Academy, an island on Pearl River near Guangzhou. Many military leaders of the following decades were Huangpu graduates, including Lin Biao, as well as nationalist Chinese generals.

After the allied forces of the Kuomintang and the Communists reunified China, Chiang Kai-shek, with the help of underworld forces such as the Green Gang, attacked the Communists. This had the effect of suppressing labor unions.[citation needed]

After 1949, the revolutionaries became the ruling class. The Communist Party cadres became the new upper class.[citation needed] The misuse and manipulation of the ration system by members of the cadre class threatened to change them into a new class of privileged bureaucrats and technicians, mere descendants of the pre-revolutionary ruling class of cadre technocrats and selected representatives of the old proletariat. Whereas in the past, their position had been accessed primarily through acceptance to the best schools, now cadre status came to give them access to materials and options not fairly distributed amongst all. Housing had always been in demand in China, particularly in the larger cities, and cadres were protected from the intense competition for living space.

In the countryside, the landlord class was eliminated during the land reform. In 1959, there were ten million state cadres, thirty-five million state workers, and two hundred million peasants.[citation needed] Chinese society was typical of agrarian societies because the peasant class composed the majority of the population.

Following the implementation of land reforms, Mao instituted a process of collectivization in response to the selling of land by peasants to the new generation of rich land owners. Afraid of creating a new landlord class, Mao instituted a system of communes where land was supposed to be worked equally by peasants. His idea was to capitalize on the sheer number of peasants and effectively produce a surplus harvest that would help industrialization. This was known as the Great Leap Forward, which was a failure and resulted in the deaths of twenty to thirty million peasants.[citation needed]

Just as farmers were put into communes, state workers were placed in large work units called danweis. Since urban education reform was growing at a much faster rate than in rural areas, more and more workers were high school graduates. The slowing down of state industries and the increasing number of qualified middle class candidates contributed to the fact it became more and more difficult to obtain a position as a state worker.[citation needed]

At this time, the hukou system was implemented, which divided the population into urban and rural residents. This was done to make distribution of state services through danweis and communes easier and to better organize the population in preparation for a possible invasion from the Soviet Union. The hukou system made it illegal to migrate from the countryside to the city.[citation needed]

During the Cultural Revolution, the composition of society changed again. Schools were closed and many youth were sent down to the countryside putatively to learn from the peasants. Concern for peasants was reflected in the rural medical and educational services known as barefoot doctors and barefoot teachers. The life expectancy of peasants increased from less than forty years before 1949 to more than sixty years in the 1970s. At the same time, peasants were still the most illiterate, most powerless, and poorest social class.[citation needed]

After the Gaige Kaifang policy was implemented in the late 1970s, the Communist system Mao had instituted disintegrated in the face of economic development. In the countryside, communes had disappeared by 1984. State-run enterprises known as danweis began to lay off workers, "smashing the iron rice bowl" because of their expense and inefficiency.[citation needed]

The huge growth of the floating population is due to the Reform and Opening policy. After 1979, capitalist-owned enterprises became responsible for most Chinese economic growth and job creation. There are several important reasons for the dramatic development of the non-state sector after 1979. First, before 1979, the Chinese economy was a shortage economy with a demand much higher than the supply. Second, after 1985, there was a huge amount of surplus rural labor. Third, there was a serious shortage of services in urban areas. Fourth, in 1978, Deng stopped Mao's policy of "up to the mountains and down to the countryside." A need was fulfilled by illegitimate private sectors willing to hire migrant workers, and the government made no move to stop it. Even with the systematic ignoring of the residence permit law, it is still a barrier to urbanization (urbanization lags 20% behind industrialization) and it allows for discrimination against migrant workers.[citation needed]

The Chinese Communist Party has adapted to this new system. From 1979 to 1993, the number of cadres increased from eighteen million to thirty-seven million. After 1993, the cadre class increased by several million members until finally reaching a plateau of forty million due to the central government's actions to freeze membership. Cadres, party members, and state professionals have become the main body of the capitalist class. According to official statistics, in February 2003, 29.9% of capitalists were Communist Party Members.[citation needed] This is interesting in light of the fact that capitalists are now involved with between 70-85% of China's GDP.[citation needed]

Despite this, there is tension between capitalists and the Communist state, most notably caused by taxes, lack of access to state bank loans, and the capitalist connection with the underworld. The capitalist class manages three-fourths to four-fifths of mainland China's GDP, but only pays one-third or less of aggregate taxes. The state enterprises pay the other two-thirds. Most capitalists successfully evade taxes, helped by local governments.[citation needed]

In all the annual meetings of the national congress and national political consultative conference, capitalist legislators and representatives always complain about the difficulties in getting loans from state banks. Most of them said that during the process of their development they never got one cent in loans, and complained that in their localities the standard bribe for a loan is as high as 20 to 30% of the loan. (Tsai, 2002)