From Infogalactic: the planetary knowledge core
Jump to: navigation, search
"Baochuan" redirects here. For the city in Korea, see Pocheon.

A Chinese treasure ship (Chinese: 寶船/宝船; pinyin: bǎochuán) was a type of large wooden ship in the fleet of admiral Zheng He, who led seven voyages during the early 15th-century Ming Dynasty. Scholars disagree about the factual accuracy and correct interpretation of accounts of the treasure ships.[1][2]

The purported dimensions of these ships at 137 m (450 ft) long and 55 m (180 ft wide)[3] are at least twice as long as the largest European ships at the end of the sixteenth century. The British scientist, historian and sinologist Joseph Needham stated in his monumental research work Science and Civilisation in China that the ships were between 400 feet to 600 feet in length — greater than the Greek tessarakonteres of 3rd century BC, which were reported to be as long as 128 m (425 ft). Treasure ships' dimensions are debated on practical engineering grounds, with some suggesting they were as short as 61–76 m (200–250 feet) or that they could only have been used on special occasions in the relative safety of the lower Yangtze River. Although a claimed treasure ship rudder has been unearthed in Nanjing, its size is no larger than rudders known to have been used in sub 60 metre Jiangsu trading ships of the 1930s.

The modern understanding of the ships derives from empirical and theoretical knowledge of the technical limitations of wooden sailing ships, historical Chinese records and accounts from European travelers who visited China around this time. There is debate amongst scholars about how these records should be interpreted. Some accounts suggest that treasure ships may have first appeared as early as the Song dynasty (960–1279). The modern analysis of the shape and structure of these ships is based on the contemporary Tian Fei Jing (The Worship of the Celestial Spouse) and the Wubei Zhi (The Records of Armaments and Military Provisions).[4]

If the accounts can be taken as factual, Zheng He's treasure ships were enormous, with nine masts and four decks capable of accommodating more than 500 passengers, as well as a massive amount of cargo. Marco Polo and Ibn Battuta in their translated accounts described multi-masted ships carrying 500 to 1000 passengers.[5] Niccolò Da Conti, a contemporary of Zheng He, was also an eyewitness of ships in Southeast Asia, claiming to have seen five-masted junks of about 2000 tons burthen.[6] A 'B' Class trading junk (c.55m long) from Xiamen in the third decade of the 19th century was wrecked in the entrance to Selat Gelasa, Indonesia, carrying c.1600 crew and passengers.[7] Zheng He's fleet included 300 ships, including 62 treasure ships, some of which were said to have been 137 m (450 ft) long and 55 m (180 ft) wide.[3][8][9] There are even some sources that claim some of the treasure ships might have been as long as 180 m (600 ft).[10][11] On the ships, there were more than 2800 people, including navigators, explorers, sailors, doctors, workers, and soldiers. Chinese records assert that Zheng He's fleet travelled extensively, sailing as far as East Africa. 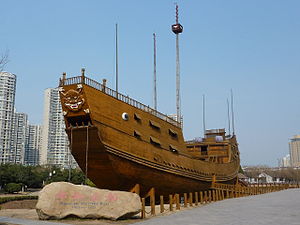 A stationary full-size model of a "middle-sized" treasure ship (63.25 m long) at the Treasure Ship Shipyard site in Nanjing. It was built c. 2005 from concrete and wooden planking 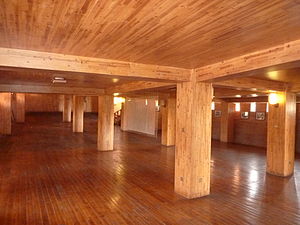 Inside the display ship in Nanjing

The Treasure Ships were recorded to have a size of 44 zhang, 4 chi, i.e. 444 chi. This was no coincidence. There are four cardinal directions, four seasons, and four virtues. The number four was an auspicious association for treasure ships[12] Some of the drydocks at Longjiang were 27 to 36 m (90 to 120 feet) wide, but two were 64 m (210 feet) wide, which is big enough to build a 50 m (166-foot) wide ship. Compared with other ships, treasure ships were wide in ratio to their length as typical with fuchuan.[clarification needed] As a result, they achieved stability created by the V-shaped hull, the long keel, and the heavy ballast. The keel consisted of wooden beams bound together with iron hoops. In stormy weather, holes in the prow would partially fill with water when the ship pitched forward, thus lessening the violent turbulence caused by waves. Treasure ships also used floating anchors cast off the sides of the ship in order to increase stability. The stern had two 2.5 m (8 foot) iron anchors weighing over a thousand pounds each, used for mooring offshore. Like many Chinese anchors, these had four flukes set at a sharp angle against the main shaft. Watertight compartments were also used to add strength to the treasure ships. The ships also had a balanced rudder which could be raised and lowered, creating additional stability like an extra keel. The balanced rudder placed as much of the rudder forward of the stern post as behind it, making such large ships easier to steer. Unlike typical fuchuan, the treasure ships had nine staggered masts and twelve square sails, increasing its speed. Treasure ships also had 24 cast-bronze cannons with a maximum range of 240 to 275 m (800–900 feet). However, treasure ships were considered luxury ships rather than warships. As such, they lacked the fuchuan's raised platforms or extended planks used for battle.[13]

One explanation for the alleged size of these colossal ships was that the largest 44 Zhang treasure ships were merely for a display of imperial power by the Emperor and imperial bureaucrats on the Yangtze River when on court business, including when reviewing Zheng He's actual expedition fleet. The Yangtze River, with its calmer waters, may have been navigable for such large but unseaworthy ships. Zheng He would not have had the privilege in rank to command the largest of these ships. The largest ships of Zheng He's fleet were the 6 masted 2000-liao ships. This would give burthen of 500 tons and a displacement tonnage of about 800 tons.[4][15][16]

Fate of the treasure ships 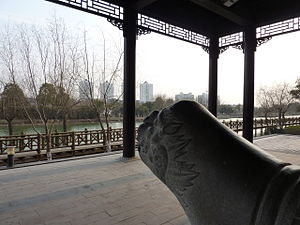 A stone tortoise overlooking the former 4th working pool of the Longjiang Shipyard (now a park), where treasure ships were built 600 years ago.

Zheng He returned from his voyages to find a new emperor, whose court was uninterested, even hostile, to the continuation of his naval adventures.[citation needed]

After Zheng He's voyages, the treasure ships were decommissioned, and sat in harbours until they rotted away.[citation needed] Some suggest that the Emperor ordered the treasure ships and records to be burned, although exact information on their fate is not known.