From Infogalactic: the planetary knowledge core
Jump to: navigation, search
For the town in the Province of Arezzo, see Chiusi della Verna. Not to be confused with Chiusa. 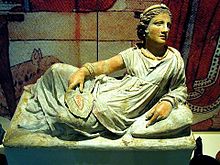 Clusium (Clevsin in Etruscan) was one of the more powerful cities in the Etruscan League. Chiusi came under the influence of Rome in the 3rd century BC and was involved the Social War.

In 540 AD it was occupied by the Ostrogoths and was later seat of a Lombard duchy. From the 11th century it was under the rule of the local bishop, and was later contended by Orvieto and, from 1231, Siena, belonging to the latter until 1556, when it was annexed to the Grand duchy of Tuscany.

The lowlands around Chiusi house numerous trove of tombs for this civilization. The Etruscan Museum of Chiusi is one of the most important repositories of Etruscan remains in Italy.

Chiusi is served by a gate on the A1 Highway. It is also served by a station on the railway connecting Rome to Florence (Chiusi-Chianciano Terme).