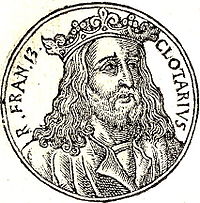 Chlothar III (or Chlotar, Clothar, Clotaire, Chlotochar, or Hlothar, giving rise to the name Lothair; 652–73) was the eldest son of Clovis II, king of Neustria and Burgundy, and his queen Balthild. When Clovis died in 658, Chlothar succeeded him under the regency of his mother.

The Historia Langobardorum reports that in the early 660s a Frankish army invaded Provence and then Italy (bk 5, ch V). This force came upon the camp of the Lombard king Grimoald I of Benevento, at Rivoli near Asta. Grimuald pretended to flee. The Franks looted the camp and celebrated. Then, after midnight, Grimuald attacked and drove them back to Neustria.

After the death of Saint Eligius in 661, the Life of Eligius — written soon after Chlothar's death — records that a plague reduced the population of France's cities. A plague in the British Isles, according to Bede, did the same there in 664.

During the regency, Austrasians begged for a king of their own and in 662, the Clothar's government gave Austrasia to another son of Clovis II, Childeric II.

Also during his reign, the mayor of the palace Erchinoald died and a council of Franks elected Ebroin to replace him. As of 668, Bede tells that Ebroin was running the nation's foreign policy and internal security. Given that the Liber historiae Francorum admits four years for Chlothar's reign, it remains possible that Chlothar began to exert some real authority when his mentors deemed him an adult, 669.

Chlothar died in Spring 673. He was buried in Saint Denis Basilica and a tomb, probably his, was discovered there recently.[when?] Then, his brother Theuderic III succeeded him.

It is notable that he is often described as the first roi fainéant—do-nothing king—of the Merovingian dynasty; and at least until the last four years of his life this description is fitting.