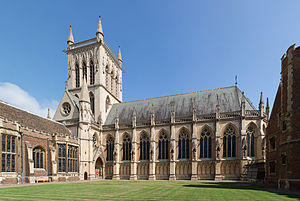 The Choir of St John's College, Cambridge, is a collegiate choir of the English cathedral tradition. Though early records are obscure, it is known that its origins can be traced to the original foundation of the College in 1511. As well as daily singing of the liturgy in the college Chapel, it broadcasts and records extensively. It is set apart from other English choirs by its distinctive 'Continental' sound. 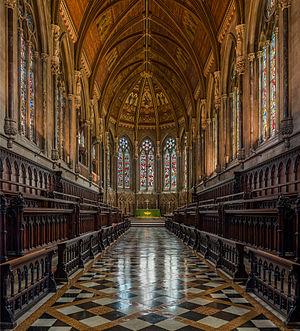 The choir follows the English cathedral tradition of men and boys.

The boys are educated at the St John's College School, at the extreme west end of the College grounds. They travel to and from Chapel wearing a miniature version of the college's undergraduate dress — mortar boards and academic gowns (or cloaks in the winter) over their uniforms. As well as the traditional church choir ranks of head and deputy head choristers, one boy a year is awarded the George Guest medal, in memory of the former Organist. Upon leaving the choir, many boys take up music scholarships at the country's leading independent schools.

The men of the choir are either undergraduates at the College or, occasionally, lay clerks (who have generally just graduated from St John's or another Cambridge college). As well as singing with the boys, they sing one service a week on their own and all services when the boys are on their half term holiday.

As the Gentlemen of St. John's, they also sing lighter music, and are in frequent demand for concerts, May Balls, and many other engagements; they have also recorded many CDs ranging from close-harmony to renaissance music and tour regularly around the world.

Services follow the tradition of the Church of England, generally consisting of a Sunday Eucharist and evensong every day except Monday. Like the other elite cathedral and collegiate choirs, the repertoire extends far beyond the core Anglican pieces. The efforts of organists over the centuries have broadened it further: Walmisley, for example (whose godfather Thomas Attwood studied under Mozart) collaborated with Felix Mendelssohn, while George Guest was a great advocate of contemporary French choral music.

Many composers have written for the choir. Herbert Howells wrote a set of evening Canticles, as did Sir Michael Tippett, who was reputedly attracted by the renowned trompeta real stop on the organ. The College continues to commission new works from contemporary composers, particularly for the Advent and Ash Wednesday services, including recently Bob Chilcott, Philip Moore, Tarik O'Regan, and Dr John Rutter.

The choir has an extensive discography, and tends to record two CDs a year. The series of recordings of English church music, recorded under Christopher Robinson and released on label Naxos Records, attracted particular critical acclaim. The choir's most recent CD release is David Hill's final recording with St John's, a CD of music by Edward Bairstow featuring baritone Roderick Williams and the Britten Sinfonia. Under the new direction of Andrew Nethsingha, the choir record with Chandos Records who have so far released six CDs, with a seventh to arrive in early 2013. The Choir has also recorded under its own label, St John's College Records, including a disc of music for choir, harp and organ, featuring Leonard Bernstein's Chichester Psalms and "Otcenáš" (the Lord's Prayer) by Leoš Janáček.

As well as this, the choir tours extensively, gives concerts in Cambridge and beyond, and broadcasts frequently. The Advent carol service and Evensong for Ash Wednesday in particular are often broadcast by BBC Radio 3 as part of the station's regular broadcast of Choral Evensong.[1] The choir was also the first choir in the UK to webcast its services, releasing a new webcast each week throughout the year since 2008. An archive of recent live recordings taken from these webcasts, SJC Live, was launched in November 2011.

There are occasionally special services in Chapel which add variety to its liturgical life. There is a Lenten meditation, an Epiphany service with carols, and, every few months, services in which the choir is joined by another Cambridge collegiate choir. Every year, there is a joint evensong with the Choir of King's College, Cambridge; the venue alternates between King's and St John's each year.

Perhaps the most unusual tradition is the Ascension Day carol. Legend has it that, in 1902, the then Organist, Cyril Rootham was challenged to a bet that the choir could not be heard from the tower roof: the following Ascension Day, they ascended the 163-foot (50 m) tower and proved this to be wrong.[2] The tradition continues; at noon after the sung Eucharist, the congregation (and other visitors) gather in First Court to hear the choir, who, unlike Magdalen College, remain unaided by microphones.

Many recent choral scholars continue to sing in professional groups, whilst organ scholars often lead the music in English cathedrals (such as St Edmundsbury, Carlisle, and Wells). In addition, several former organ scholars have subsequently gone on to direct the choir, as was the case with George Guest, David Hill and Andrew Nethsingha.