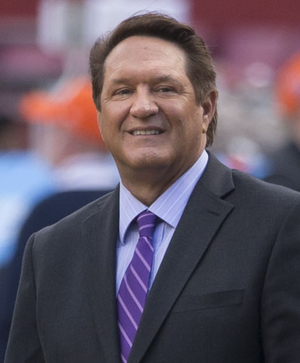 Christopher Patrick "Chris" Myers (born March 28, 1959[1]) is an American sportscaster. A native of Miami, FL with more than 20 years in broadcasting, he has covered premiere events, including the Super Bowl, World Series, NBA Finals, NCAA Final Four, The Masters and U.S. Open (golf), Triple Crown, the Olympics, and the Daytona 500.

Chris Myers, garnered his first major break in broadcasting as a 16-year-old high school student when he hosted his own show on Miami’s WKAT-AM radio, interviewing such sports heavy hitters as Muhammad Ali and Don Shula.[citation needed] Myers graduated from Chaminade High School, Hollywood, Florida, May, 1977. In the early 1980s Myers hosted a sports radio call-in show on WIOD-AM in Miami before moving to New Orleans in the mid-1980s to work for broadcast station WWL. He joined Fox Sports Net as an anchor in December 1998 where he hosted the National Sports Report, among other hosting duties. Prior to joining FOX/FSN, Myers spent ten years at ESPN.

Prior to joining FSN/Fox Sports, Myers spent ten years (1988-1998) at ESPN hosting SportsCenter, Baseball Tonight, and other various shows including the interview program Up Close, where Myers was honored as one of TV's best interviewers. He also received an Emmy for his work.

As host of Up Close, Myers was the first to conduct a live interview with O.J. Simpson after both his criminal trial and civil lawsuit. Myers spoke about this in detail in a March 2016 episode of the Bill Simmons Podcast, with guest host Bryan Curtis.

Myers earned acclaim for his live reporting during the San Francisco earthquake that took place during the world series. Myers was also the only on scene reporter who stayed on the air through the night broadcasting from Atlanta during the Centennial Olympic Park bombing.[citation needed]

In December 1998, Myers joined Fox Sports Net, where he was one of the original anchors of The National Sports Report and the weekly sports magazine program Goin' Deep. In 2005, he debuted The Chris Myers Interview on FSN. In 2000, Myers joined Fox Sports Radio where he currently hosts his own interview show, CMI, which can be heard on over 200 affiliates. Myers conducted the last public interview with the late John Wooden in April 2010 on CMI. The legendary 99-year-old coach told Myers he did not fear death saying "The next life will be even better, and this one hasn't been too bad."

Myers has been the studio host for NASCAR coverage on Fox since they began coverage in 2001. He also serves an announcer for NFL game and a reporter for the NFL on Fox, Fox College Football and Major League Baseball on Fox. He was also a reporter for Fox's coverage of the Bowl Championship Series.

Myers presented the New Orleans Saints with their first ever NFC championship trophy after narrowly defeating the Minnesota Vikings 31-28 on January 24, 2010.

During a Detroit Lions and New Orleans Saints game, on September 13, 2009, Myers made a remark while talking about linebacker Larry Foote's decision to leave the perennially strong Pittsburgh Steelers to play for Detroit, "That's like going from dating Beyoncé to Whoopi Goldberg!"[2][3][4][5] Frank Caliendo later impersonated Myers on the NFL pre-game show.

Myers also visited the American armed forces in Qatar on behalf of Fox Sports and gave a live broadcast with the armed forces that was shown on the fox pre-game show before the New Orleans Saints played the Dallas Cowboys on November 25, Thanksgiving Day. On a May 17, 2010 appearance on The Dan Patrick Show, Myers made comments regarding the May 2010 Tennessee floods that were interpreted by some as disparaging toward the city of New Orleans and the victims of Hurricane Katrina: "We have disasters issues when people pull together and help themselves and I thought the people in Tennessee, unlike -- I'm not going to name names -- when a natural disaster hits people weren't standing on a rooftop trying to blame the government, okay. They helped each other out through this. And Mike Helton, president of NASCAR, Tony Stewart, among some drivers went from the race over to the middle Tennessee area where still a lot of hardworking, tax-paying, legal American citizens have been affected by the floods and are trying to rebuild their lives and they are helping out. And I think that other people around the country, of course the music industry in and around Nashville helping, without making a big deal out of it and I think that's a good thing." [6]

On May 20, 2010, New Orleans Mayor Mitch Landrieu wrote a letter to Fox Sports requesting an apology, calling Myers' comments "offensive and unacceptable." Myers issued an official apology for his comments, calling them "inappropriate and insensitive."[7]

On July 14, 2012, Myers called his first MLB on Fox game with Eric Karros when the New York Mets played against the Atlanta Braves at Turner Field.

Myers also served as a field reporter for Fox's postseason telecasts from 2004 to 2008. This occupation included in-game reports until Ken Rosenthal was hired as an "MLB insider" and a field reporter, which relegated Myers to pre- and postgame segments, though he did conduct several trophy presentations for pennant-winners. Kenny Albert took this role in 2009, before it was eliminated in 2010.

He has also hosted shows and events on the Discovery Channel, Tennis Channel, and the Military Channel. He has appeared on Jimmy Kimmel Live! numerous times. Myers also serves as the play-by-play commentator for Tampa Bay Buccaneers preseason games that air locally on WTSP-TV, after having the same role for WFLA-TV from 2003-2010. Myers was also named as the host in 2010, for Showtime's weekly series Inside NASCAR.

He currently resides in Hollywood, California with wife Sue and their son, Alex.

On February 16, 2012, Myers’ 19-year-old son, Christopher, died in a car crash. The accident took place in Thousand Oaks near the Myers' residence.[8][9] While on bereavement leave, John Roberts took over for him for NASCAR on Fox coverage of the Budweiser Shootout and the 2012 Daytona 500, which was postponed to Monday night and ran into early morning Tuesday due to a two-hour-long red flag. Myers returned to the Hollywood Hotel at the Subway Fresh Fit 500.