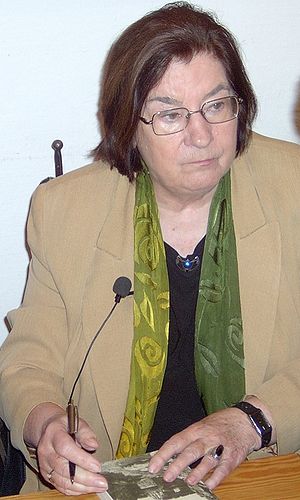 Christa Wolf (née Ihlenfeld; 18 March 1929, Landsberg an der Warthe – 1 December 2011, Berlin) was a German literary critic, novelist, and essayist.[1][2] She was one of the best-known writers to emerge from the former East Germany.[3][4]

Wolf was born the daughter of Otto and Herta Ihlenfeld, in Landsberg an der Warthe, then in the Province of Brandenburg;[3] the city is now Gorzów Wielkopolski, Poland. After World War II, her family, being Germans, were expelled from their home on what had become Polish territory. They crossed the new Oder-Neisse border in 1945 and settled in Mecklenburg, in what would become the German Democratic Republic, or East Germany. She studied literature at the University of Jena and the University of Leipzig. After her graduation, she worked for the German Writers' Union and became an editor for a publishing company.

She joined the Socialist Unity Party of Germany (SED) in 1949 and left it in June 1989, six months before the Communist regime collapsed. She was a candidate member of the Central Committee of the SED from 1963 to 1967. Stasi records found in 1993 showed that she worked as an informant (Inoffizieller Mitarbeiter) during the years 1959–61.[4] The Stasi officers criticized what they called her "reticence", and they lost interest in her cooperation. She was herself then closely watched for nearly 30 years. During the Cold War, Wolf was openly critical of the leadership of the GDR, but she maintained a loyalty to the values of socialism and opposed German reunification.[1]

Kassandra is perhaps Wolf's most important book, re-interpreting the battle of Troy as a war for economic power and a shift from a matriarchal to a patriarchal society. Was bleibt (What Remains), described her life under Stasi surveillance, was written in 1979, but not published until 1990. Auf dem Weg nach Tabou (1995; translated as Parting from Phantoms) gathered essays, speeches, and letters written during the four years following the reunification of Germany. Leibhaftig (2002) describes a woman struggling with life and death in 1980s East-German hospital, while awaiting medicine from the West. Central themes in her work are German fascism, humanity, feminism, and self-discovery. In 2004 she edited and published her correspondence with her UK-based near namesake Charlotte Wolff over the years 1983–1986 (Wolf, Christa and Wolff, Charlotte (2004) Ja, unsere Kreise berühren sich: Briefe, Luchterhand Munich).

Wolf's works have sometimes been seen as controversial since German reunification. Upon publication of Was bleibt, West German critics such as Frank Schirrmacher argued that Wolf failed to criticize the authoritarianism of the East German Communist regime, whilst others called her works "moralistic". Defenders have recognized Wolf's role in establishing a distinctly East German literary voice.[7] Fausto Cercignani's study of Wolf's earlier novels and essays on her later works have helped promote awareness of her narrative gifts, irrespective of her political and personal ups and downs. The emphasis placed by Cercignani on Christa Wolf's heroism has opened the way to subsequent studies in this direction.[8]

Wolf received the Heinrich Mann Prize in 1963, the Georg Büchner Prize in 1980, and the Schiller Memorial Prize in 1983, the Geschwister-Scholl-Preis in 1987, as well as other national and international awards. After the German reunification, Wolf received further awards: in 1999 she was awarded the Elisabeth Langgässer Prize and the Nelly Sachs Literature Prize, and Wolf became the first recipient of the Deutscher Bücherpreis (German Book Prize) in 2002 for her lifetime achievement. In 2010, Wolf was awarded the Großer Literaturpreis der Bayerischen Akademie der Schönen Künste.