The Christian Social Union in Bavaria (

CSU – Christlich-Soziale Union in Bayern (help·info)) is a Christian democratic[7] and conservative[8][9] political party in Germany. The CSU operates only in Bavaria, while its larger sister party, the Christian Democratic Union (CDU), operates in the other fifteen states of Germany. The CSU has 45 seats in the Bundestag, making it the smallest of the five parties represented.

The CSU was founded in some ways as a continuation of the Weimar-era Catholic Bavarian People's Party (BVP). At the federal level, the CSU forms a common 'CDU/CSU' faction in the Bundestag with the CDU, which is frequently referred to as the Union Faction (die Unionsfraktion). Until the 2013 election, the CSU governed at the federal level along with the CDU in a coalition government with the liberal Free Democratic Party (FDP). In the state of Bavaria, the CSU governed as the major party in a coalition government with the FDP from 2008 to 2013. Since the 2013 Bavarian state election the CSU governs alone with an absolute majority. The CSU differs from their coalition partners, the CDU, by being somewhat more conservative in social matters while the CSU is economically a bit more pro-interventionist.

The CSU is a member of the European People's Party (EPP) and the International Democrat Union. The CSU currently has three ministers in the cabinet of Germany of the federal government in Berlin, while party leader Horst Seehofer serves as Minister-President of Bavaria: a position that CSU representatives have held since 1957. 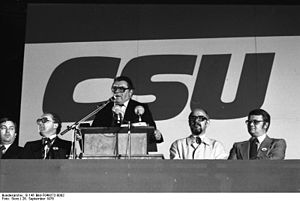 Franz Josef Strauß (1915–1988) had left behind the strongest legacy as a leader of the party, having led the party from 1961 until his death in 1988. His political career in the federal cabinet was unique in that he had served four ministerial posts in the years between 1953 and 1969. From 1978 until his death in 1988, Strauß served as the Minister-president of Bavaria. Strauß was the first leader of the CSU to be a candidate for the German chancellery, in 1980. In the 1980 federal election Strauß ran against the incumbent Helmut Schmidt of the Social Democratic Party of Germany (SPD), but lost thereafter, as the SPD and the Free Democratic Party (FDP) managed to secure an absolute majority together, forming a Social-liberal coalition.

The CSU has led the Bavarian state government since it came into existence in 1946, save from 1950 to 1953 when the Bavaria Party formed a state government in coalition with the state branches of the SPD and FDP. Before the 2008 elections in Bavaria, the CSU perennially achieved absolute majorities at the state level by itself. This level of dominance is unique among Germany's 16 states. Edmund Stoiber took over the CSU leadership in 1999. He ran for Chancellor of Germany in 2002, but his preferred CDU/CSU–FDP coalition lost against the SPD candidate Gerhard Schröder's SPD-Green alliance.

In the 2003 Bavarian state election, the CSU won 60.7% of the vote and 124 of 180 seats in the state parliament. This was the first time any party had won a 2/3 majority in a German state parliament.[10] The Economist later suggested that this exceptional result was due to a backlash against Schröder's government in Berlin.[11] The CSU's popularity declined in subsequent years. Stoiber stepped down from the posts of Minister-President and CSU chairman in September 2007. A year later, the CSU lost its majority in the 2008 Bavarian state election, with its vote share dropping from 60.7% to 43.4%. The CSU remained in power by forming a coalition with the Free Democratic Party. In the 2009 general election, the CSU received only 42.5% of the vote in Bavaria in the 2009 election, which constitutes its weakest showing in the party's history.

The CSU made gains in the 2013 Bavarian state election and the 2013 federal election, which were held a week apart in September 2013. The CSU regained their majority in the Bavarian Landtag and remained in government in Berlin. They have three ministers in Angela Merkel's current cabinet: Christian Schmidt (Minister of Food and Agriculture), Alexander Dobrindt (Minister of Transport and Digital Infrastructure) and Gerd Müller (Minister for Economic Cooperation and Development).

Relationship with the CDU

The CSU is the sister party of the Christian Democratic Union (CDU).[12] Together, they are called 'The Union'.[12] The CSU operates only within Bavaria, and the CDU operates in all other states, but not Bavaria. While virtually independent,[13] at the federal level, the parties form a common CDU/CSU faction. No Chancellor has ever come from the CSU, although Strauß and Edmund Stoiber were CDU/CSU candidates for Chancellor in the 1980 federal election and the 2002 federal election, respectively, which were both won by the Social Democratic Party of Germany (SPD). Below the federal level, the parties are entirely independent.[14]

Since its formation, the CSU has been more conservative than the CDU.[3] It is also regarded as a right-populistic party. The CSU and the state of Bavaria decided not to sign the Grundgesetz of the Federal Republic of Germany, as they could not agree with the division of Germany into two states, after World War 2. Although Bavaria has a separate police and justice system (distinctive and non-federal), the CSU has actively participated in all political affairs of the German Parliament, the German Government, the German Bundesrat, the parliamentary elections of the German President, the European Parliament, and meetings with Gorbachev in Russia.

The CSU has contributed eleven of the twelve Ministers-President of Bavaria since 1945, with only Wilhelm Hoegner (1945–46, 1954–57) of the SPD also holding the office.