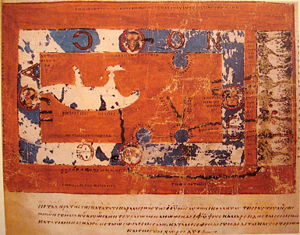 The Christian Topography (original Greek title Χριστιανικὴ Τοπογραφία, Latin title Topographia Christiana) is a 6th-century work, one of the earliest essays in scientific geography written by a Christian author. It was originally written as five books by Cosmas Indicopleustes and expanded to ten to twelve books around 550 AD.,[1]

While most of the Christians of the same period maintained that the Earth was a sphere the work advances the idea that the world is flat, and that the heavens form the shape of a box with a curved lid, and especially attacks the idea that the heavens were spherical and in motion, now known as the geocentric model of the universe. The author cites passages of scripture which he interprets originally in order to support his thesis, and attempts to argue down the idea of a spherical earth by stigmatizing it as "pagan". An early surviving reference to the work is by Patriarch Photios I of Constantinople in the 9th century AD. Photius condemns the style and syntax of the text as well as the honesty of the author. More recent authors tend to agree with Photius on the stylistic points, but do find the author generally reliable for geographical and historical references. Edward Gibbon, for example, said "the nonsense of the Monk was, nevertheless, mingled with the practical knowledge of the traveller" and used it in writing The History of the Decline and Fall of the Roman Empire.[2][3] 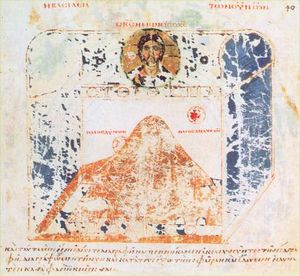 The world according to the book is a parallelogram.

The Topography is often cited as evidence that Christianity introduced the idea of the flat-earth into the world, and brought in the age of ignorance. The latter pages of his work are devoted to rebutting the criticism of his fellow monks that what he was saying was wrong. He repeatedly denounces "those reprobate Christians who, ..., prefer, through their perverse folly or downright wickedness, to adopt the miserable Pagan belief that earth and heaven are spherical, and that there are Antipodes on whom the rain must fall up." Raymond Beazley, in the first volume of the The Dawn of Modern Geography (1897), said[2][3]

The place of Cosmas in history has been sometimes misconceived. His work is not, as it has been called (in the earlier years of this century), the chief authority of the Middle Ages in geography. For, on the whole, its influence is only slightly, and occasionally, traceable. Its author stated his position as an article of Christian faith, but even in those times there was anything but a general agreement with his positive conclusions. . . The subtleties of Cosmas were left to the Greeks, for the most part; the western geographers who pursued his line of thought were usually content to stop short at the merely negative dogmas of the Latin Fathers; and no great support was given to the constructive tabernacle system of the Indian merchant. ... Yet, after all, the Christian Topography. must always be remarkable. It is one of the earliest important essays in scientific or strictly theoretic geography, within the Christian aera [sic], written by a Christian thinker.

Besides the cosmological elements of the book, Christian Topography provides insight into the geographical knowledge of 6th century Byzantium. "Indicopleustes" means "Indian voyager". While it is known from classical literature that there had been trade between the Roman Empire and India, Cosmas was one of the individuals who had actually made the journey. Indeed we learn from his book that he had travelled over much of the Red Sea coast, and as far as modern Sri Lanka. He described and sketched some of what he saw in his Topography. Some of these have been copied into the existing manuscripts.

When not expounding his cosmology, Cosmas proves to be an interesting and reliable guide, providing a window into a world that has since disappeared. He happened to be in Ethiopia when the King of Axum was preparing a 522 or 525 AD military expedition to attack Jewish Arabs in Yemen. He recorded now-vanished inscriptions such as the Monumentum Adulitanum (which he mistakenly attributed to Ptolemy III Euergetes).

Three nearly complete manuscripts are known to exist. The earliest and best is from the 9th century, and is in the Vatican Library. This text has only ten books. Two closely related manuscripts of the 11th century, one from the Saint Catherine's Monastery and the other probably originally from the Iviron monastery of Mount Athos, contain twelve books and comment on the prophets in the same order that Theodore of Mopsuestia preferred rather than in Septuagint order. The eleventh and twelfth books may originally have been parts of other works by the same author. Portions of book five appear more frequently as a marginal commentary upon the psalms, and it is the name given to the author in these commentaries that is now used.[3]

This article uses text taken from the Preface to the Online English translation of the Christian Topography, which is in the public domain.