Christian VI (30 November 1699 – 6 August 1746) was the King of Denmark and Norway from 1730 to 1746. The eldest surviving son of King Frederick IV of Denmark and Norway and Louise of Mecklenburg-Güstrow, he is considered one of Denmark's more anonymous kings, but he was a skilled politician, best known for his authoritarian regime. He was the first king of the Oldenburg dynasty to refrain from entering in any war. He married Sophia Magdalene of Brandenburg-Kulmbach and fathered Frederick V.

His chosen motto was "deo et populo" (for God and the people).

From 1706 Christian had the Mecklenburgish J.G. Holstein and the also German J.W. Schroder as his tutors. He came to understand Danish but used German for everyday speaking and writing. In his diaries, a Danish word occasionally fall into the pen. He got a better education and acquired more knowledge than his father and grandfather, though not enough for a ruler.

As Crown Prince he was allowed by his father to find a wife by himself. During a trip through Europe accompanied by Chancellor Ulrik Adolf Holstein, the Crown Prince decided without hesitation on Margravine Sophia Magdalene, one of the ladies-in-waiting at the court of the Saxon-Polish queen Christiane Eberhardine in the Castle Pretzsch. Sophia Magdalene came from a minor margraviate (not greater than Lolland-Falster) of the Hohenzollern dynasty where able consciousness was inversely proportional to the funds; half of the land was mortgaged, and her father died young. She had 13 siblings and was considered an unequal match for the Danish prince, but the king gave his permission. In Christian's letters, he describes his feelings for the princess's intense religiosity, which reminded him of his own. They were married on 7 August 1721, while Christian was crown prince. The wedding was held at Pretzsch in Saxony.[1] 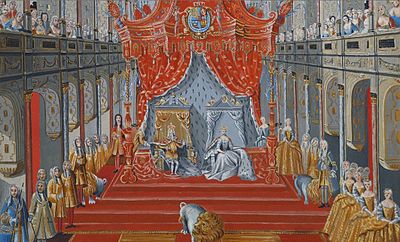 The Coronation of Christian VI, 1731.

The king was shy and introverted by nature, and stayed a way from the public. The new royal couple lived a secluded life and, although pietist, were surrounded by luxuriant splendour. Behind the curtains of their enclosed carriages lay one of Denmark's most tyrannical, repressive, and puritanical eras.

His court was frozen in time, and was said to be one of "tedious monotony". The music at the court was religious and no one danced. The king, both for health and religious reasons, rarely organized or participated in hunts.

Christian's indignation at his father's bigamy and general promiscuity - the reason for the great sorrow of his late mother - led him to one of his first government actions: reversing his father's will and depriving widow Queen Anna Sophie, Frederick IV's second wife, of a large part of the wealth she had inherited before exiling her to the Clausholm estate, her childhood home. 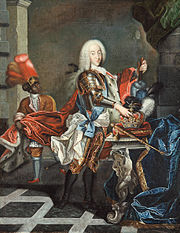 Christian VI standing his hand on the crown, accompanied by a Moorish servant.

For the first ten years of his government he consulted often with his cousin Count Christian Ernst of Stolberg-Wernigerode, who took part in almost everything, from the dismissal of cooks in the Queen's kitchen to his alliance policy. He encouraged the king as long as possible to maintain the English alliance, which led to the marriage between a George II of Great Britain's daughter with the king's elder son, until finally - circa 1740 - Count Christian Ernst's preference swung towards France and he ceased his influence. This coincided with the military-political situation in Germany no longer allowing him - as a vassal German prince - to be an advisor outside the empire.

Christian's central domestic act was the introduction of the so-called adscription of 1733 (in Danish, stavnsbånd), a law that forced peasants to remain in their home regions, and by which the peasantry was subject to both the local nobility and the army. Though the idea behind this law was probably to secure a constant number of peasant soldiers, it later was widely regarded as the ultimate subjugation of the Danish peasantry. Therefore, this act, too, damaged Christian VI's reputation. The act was abolished in 1788.

The Royal Palace of Christiansborg, named after him

Also in 1733, the royal couple travelled to Norway. A poem/speech by Peter Höyer was performed in his honor when he visited the city of Trondheim on 18 July.

Engraving of poem/speech by Peter Höyer held on Christian VI's and his queen arrival to the city of Trondheim.

The Pietist views of King Christian of course influenced much of his ecclesiastical polity. On the surface the king was victorious, but both nobility and many common people secretly resisted the king's influence. After his death, Pietism lost its official sponsorship. This did not mean that it was without effect. It influenced much of the poetry of the age, among others, that of the great hymn writer Hans Adolph Brorson. Another lasting result of the king’s efforts was the introduction of confirmation in 1736.

In addition to pietism and adscription, there were numerous "building activities" connected to Christian VI, and he was probably the greatest Danish builder of the 18th century. His queen also made a notable effort. Among their works are Christiansborg Palace (built 1732–42, burned 1794, rebuilt), Hirschholm Palace a summer country retreat in North Zealand in current day Hørsholm municipality (built 1737–39, demolished 1812) and the Eremitage (built 1734–36, still standing). For Crown Prince Frederik (V) was built the Prince's palace in Kalveboderne ( 1743–44 still standing as the National Museum). These expensive buildings were erected financed by Øresundstolden with the purpose of representing the power and wealth of the Danish realm, but they also became an economic burden on the subjects.

Christian's foreign policy was a peaceful one, and Denmark kept strictly neutral. In both trade and commerce, it was an age of advancement; some new companies and banks were founded. His plans to make their only daughter Queen of Sweden during the election of the heir to the vacant Swedish throne (1742–43), through an engagement with the Prince of Zweibrücken-Birkenfeld who acted as France's candidate, never came to fruition.

The Treaty of San Ildefonso

The Treaty of San Ildefonso of 1742, signed between Spain and Denmark, was a treaty of friendship, commerce and navigation by setting out the conditions that would govern commercial relations between the two countries .

José del Campillo y Cossio on behalf of Philip V of Spain and Frederik Ludvig, Baron Dehn, by Christian VI, adjusted the agreement at the Royal Palace of La Granja de San Ildefonso on July 18, 1742. The main points agreed in the treaty were:

Freedom of navigation for fleets of both countries in the ports of the other signatory, except for ships of Spain in Iceland, Faroe Islands and Danish colonies in Greenland, Nordland and Finnmark, where Danish government orders not allowed trade with any country except Denmark.

Merchant ships could enter and trade freely in their counterpart ports, upon declaration of the goods and payment of tax practices. Danish materials for shipbuilding would be exempt from tax in Spain. The Danish fish would pay only half of the taxes imposed.

Warships of each signatory countries could not enter the ports of the other in number than 6. Traded goods should carry certification of their origin.

The treaty was never made effective: Spanish authorities considered that the exemption clause on half of the taxes for the import of Danish fish conflicted with other treaties with third countries, in which they were guaranteed preference in trade with Spain. In 1753 the agreement would be nullified. 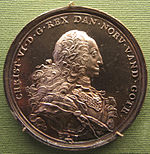 To posterity Christian VI is known foremost as a religious ruler. He was deeply devoted to Pietism, and during his entire reign he tried to impart its teachings to his subjects. The religious pressure he imposed, along with his lack of personal charm, made him one of the most unpopular of Denmark's absolutist kings. Later historians have tried to rehabilitate his reputation. They have stressed that he was not quite so intolerant as had been said and that he was an industrious and scrupulous bureaucrat. The negative impression, however, has lasted over the years.

Christian VI was a man with a tendency to shun human society. From his youth, he was sickly, user of many water cure and medical treatments, several diseases led to his early death.

On 6 August 1746 – the day before his silver marriage anniversary – the king died on Hirschholm Palace. Christian VI was interred in Roskilde Cathedral. The neoclassical memorial designed and produced by sculptor Johannes Wiedewelt was commissioned by the king's widow who upon his death thanked God for "an incomparable king with whom for 25 years she has lived in unchanging love and joy."[3] The marble monument was completed in 1768, but not installed at Roskilde Cathedral until 1777. The monument includes a sarcophagus and two female figures, "Sorgen" ("Sorrow") and "Berømmelsen" ("Fame"). This was the first neoclassical sarcophagus in Denmark and is considered to mark the start of neoclassicism in that country.[4][5]